Tram changing based on position?

Has anyone seen a problem where tram is changing depending on where the spindle is positioned?

I’m using a 1" surfacing bit, it does a pretty good job of show how off the spindle is. I had it dialed in nicely, so I ran a surfacing pass on the wasteboard. I had a 1/4" stepover, that was enough before to show if I had issues.

Now I’m seeing patterns on the wasteboard. Everything is fine left-to-right, but front to back the board goes from ‘ripples’ (slightly out of tram) to dead flat and back to ripples, about every 4". The effect is perfectly consistent left-to-right.

I doubt the extrusions are doing it, so the only thing I can think of is the V wheels. Could they be out-of-round enough to show this effect? That would at least explain why the effect is periodic.

so the only thing I can think of is the V wheels. Could they be out-of-round enough to show this effect? That would at least explain why the effect is periodic.

v-wheels perimeter is about 2" though, but who knows, maybe the effects of several mechanical things add up to a 4" period. Out of curiosity, could you upload have a picture ? How many stripes are there along the Y dimension? Can you feel any slop in the Z carriage when you rock it front and back manually ?

I can’t check right now but I seem to remember that the inner diameter inside of the V groove (on which the wheel actually rides) was around 19mm, hence the ~2" (inner) circumference. But I may well be wrong and I’ll grab my caliper tonight to double check that (unless someone else does first)

Yeah… I had an odd feeling about that too that made me cross my eyes trying to figure it out, wondering if they truly sit on the apex of the V or on the sloped walls of the V.

I get about 70mm rolling distance on the old belt driven Z which uses, I think, the same V wheels and similar rail profile, which is consistent with a 22mm rolling diameter. 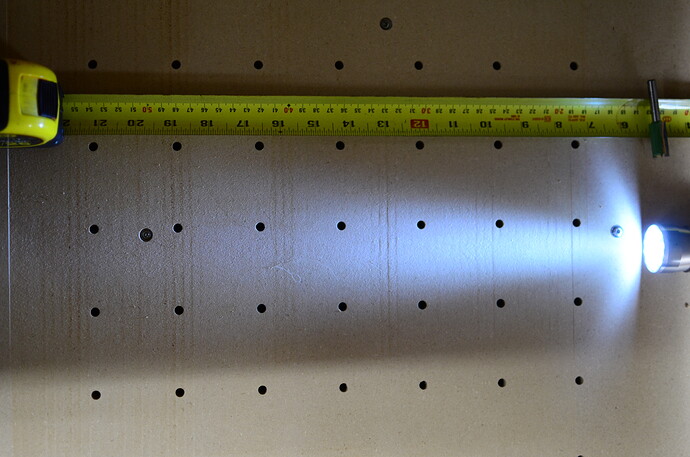 That looks like it could well be V wheels, it could well be that they’re just over-tensioned and developing flat spots, alternatively they could be damaged. I think damage is less likely as this is symmetric across the length of X which would require the same damage left and right.

If you were to disengage both Y drive belts and roll the X axis back and forth, I suspect you would feel a lumpy bumpy movement as the V Wheels roll over the flat spots.

My suggestions in order of effort are

OK, I’ll try re tensioning the V wheels and see if that’s the problem. I suspect I did have it too tight, as I was not able to easily rotate the lower wheels.

I’ve unloaded them and now can rotate the lower wheels, I’ll run it back and forth a few times then try another surfacing pass.

You shouldn’t be able to rotate the lower wheels w/o the carriage wanting to move — see:

Thanks everyone, it looks like too-tight wheels was the problem. I re-adjusted them, and things are much better - the tram is now consistent across the whole board.