I have an XXL, HDZ and an 80mm spindle mount with a 2.2kw spindle and having trouble with the spindle not being 90 degrees from my surface. Been using it a while and never really noticed until I tried to relevel my surface with a 1 inch milling bit and it is leaving pretty significant seams. Since the 80mm mount does not use the EZTram plate what is the best way to do this?

For left/right tramming, you use the eccentrics nuts (present on the top two bolts of the mount), adjust the left/right angle, then fasten everything. Well it works like this on my 80mm mount from the BeaverCNC times, but I think the C3D is similar.

For front/back tramming, I used a foil of aluminium folded over a few times, insert that between the mount and the HDZ, either on the bottom (if the spindle needs to be trammed upwards) or the top. It will require a few tries to get the perfect amount/number of folds. Then fasten everything.

That’s how I did it anyway.

Depends which way you’re out of square…

I decided that it was best to tram the whole Z assembly wherever possible as I would like the cutter and the Z movement axis to be aligned.

When I fitted my HDZ, before putting the spindle mount on I used an engineers square to check whether the Z axis was normal to the spoilboard front / back, i.e. whether the X axis beam was rotated, it was so I loosened off the bolts on both ends of the X axis and rotated the beam in the Y gantry plates until I was vertical, seemed to me to be easiest to tram the X beam vertical and work from there rather than fudge the Z axis as I want Z plunge to be vertical, not on some nasty angle.

I then made the same check on the side of the HDZ travelling plate the spindle bracket bolts to, I found no offset here, if there was my plan was to loosen and fudge about with the two upper V-wheel carrier bolts above the X axis.

Then I bolted on the big chunky spindle bracket from Carbide that I got with the HDZ, I made the assumption that the sides of this were parallel to the spindle axis once mounted and used the same square to check if the bracket was on square, I discovered there was a small amount of movement available, got it square and tightened it up.

I made a cheap spindle tramming tool for my dial indicator a while ago, a piece of 8mm rod and a stick basically to go in the spindle collet; 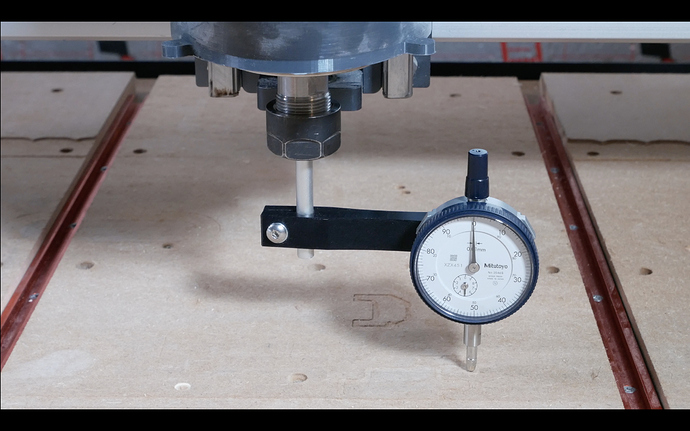 As described by lots of other people I got the idea from, it doesn’t need to be square or anything else, you rotate the spindle (by hand…) and check the dial to see if the spindle rotation axis is normal to the spoilboard.

I’m sure there’s other ways and opportunities I didn’t spot but this got my particular set of misalignments straight enough for woodwork.

Thanks for the tips. I have it perfect from front to back (Y Axis) with the aluminum foil but not sure how to tram left to right. (X Axis). I don’t see any concentric nuts to turn. I have the blue HDZ and the big 80mm Spindle mount. Right to left passes leave no seam but a subsequent left to right pass leaves a seam. I think this means it is slightly low on the right side but I don’t see any way to adjust this in really small increments.

Don’t you have those ? 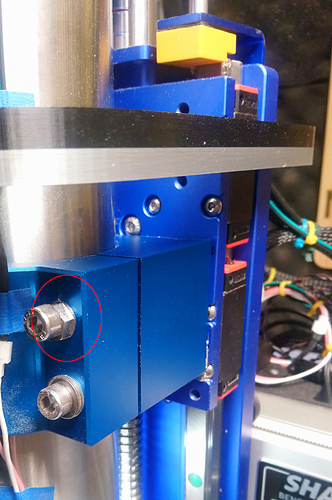 I might have been confused by Dan’s mention of his “blue” HDZ which in my book meant “BeaverCNC era”, but since the HDZ comes in grey and blue, that reasoning is incorrect now. Thanks for clarifying.

I do not have that nut. So what is the best way to adjust tram along the X axis Luke?

I usually tram front to back, lightly tighten the screws and gently knock the side of the spindle mount with a small wooden mallet - as it’s trammed I tighten and repeat…