When I import SVG files into Carbide Create, the open lines are shortened, closed lines are handled fine. This happens in all three programs I use to create the SVG (iDraw, Inkscape, Affinity Designer). In the attached image, all lines were created 10.000 mm wide, the CC grid spacing is 5.0 mm All lines were left justified in the source but have been lined up to the CC grid on the right. The lines should all contact the closest grid line on the left, there’s the issue.
The top two lines show the error is proportional to line length.
The next group of three lines show the issue is a function of tangent length, longer tangents produce more shortening.
The isolated line has been flipped on the x, the truncating is always at the starting end of the line.
The last group illustrates methods for reducing the issue. These include adding an end point with no tangent, using another point just upstream for direction adjustment. Testing only, I would not want to do this for a planned engraving with many lines. 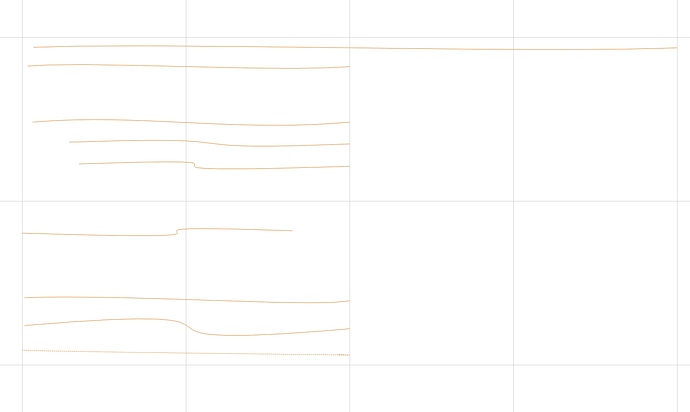 Usually the problem is that the beginning / end nodes are left off — please send these files in to support@carbide3d.com and we’ll try to have a developer look into them.

I should have mentioned, all lines in the sample file were from two points. So, in this case, end nodes are not being ignored. CC seems to be calculating some offset relative to the very first node, based on the tangent length at that node, and truncating the line at the start.
It’s very curious to me why I’m the only one reporting this. Surely others are using open lines with tangents on the first point?
Other than this issue, CC appears capable of the vast majority of what I want to do with CNC. I’ve played a bit with Fusion360, not interested. It’s way overkill for what I need and said to not so good for engraving plus I’m as unenamored of on-line work as the folks at Carbide 3D. I’m on a Mac so Vcarve and its ilk are out.