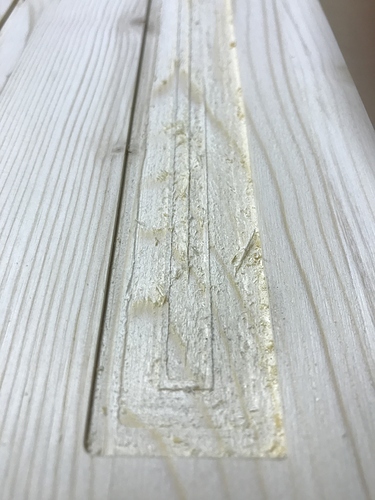 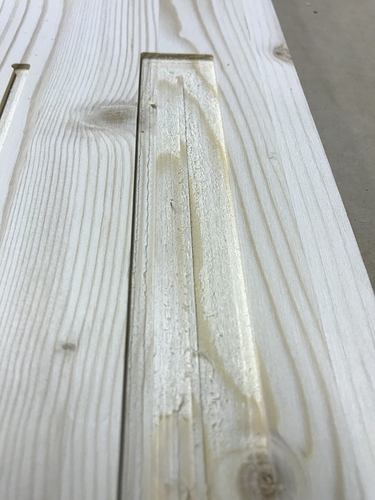 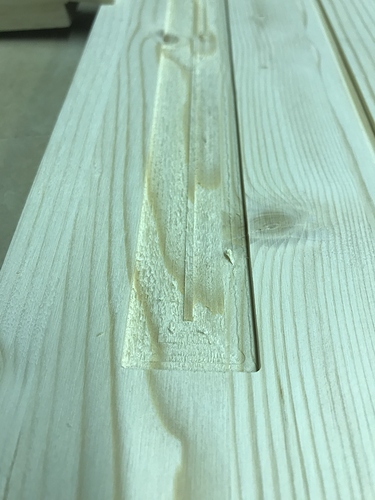 C7ED2A86-ADE8-4084-8074-06CC61946C93.jpeg3024×4032 2.19 MB
I posted the other day that I just started having a problem when v carving some stars for a flag, in the middle of work piece it was rounding the points of stars instead of sharp crisp points. As you get closer to edge of wood piece it would progressively get better. This was on a 11” wide piece I was doing and have done several others before without this problem.
Today I went to cut stripes for a flag, on a 16”x30” piece of wood. The very first stripe I cut was cutting deep as it stared in the middle and barely cutting as it got to right edge. It ran 2 passes to complete the depth and left a very rough cut and actually left uneven cuts as shown in pictures. I measured depth of cut which was set for .070 max depth and on the right end , which is middle of wood because it’s beside the union, it cut to .097 and on the right end it cut .068. The next stripe started to cut and I stopped it, measured depth on it, and it was .087 on left and .048 on right, depth of cut per pass set at.035.
I have done several of these projects without these issues, but all of a sudden I started getting this problem.
I also cut these same stripes on a different project but ran the stripes up/down (y axis) instead of left and right, measured those stripe depths and they are fine. What could be going on? Thanks
Rafi (Raphael Gilmore) October 21, 2019, 10:57pm #2

My first thought is maybe its time to re-calibrate? Have you checked the tension on your belts?

Classic look of missed steps. Reduce the plunge rate by half, and see if it gets better. It doesn’t look so much like something is loose as it does that acceleration or other forces are high enough that steps are getting skipped. Try slowing things down, aee if it still happens.

Could also be the board is not flat may have some warp in it. I just finished a sign and some of the letters were not as deep as others. After checking the board I found there were some high spots in it.

Thanks for the responses. I’m going to take a look at the belts tonight and see if I can figure out how to adjust. I also thought about my wasteboard, and took a straight edge metal yard stick and tried checking it and it seemed flat. Is there a better way to check it? Thanks again.

The best thing to do about the wasteboard is to add a spoilboard on top of it and then machine that flat.

After trying pretty much all the options, I think the best option for a spoilboard is one which is a bit smaller than the size of the cutting area of the machine — one can easily add blocking/cauls under clamps to level/properly angle clamps if need be, and not having do deal with an inset trammed area and the attendant lip (I may make an exception for the back edge — use it to align stock against — is worth it, plus it’s more efficient materials-wise.

Just because your wasteboard is flat, that doesn’t mean it is true to your machine. Do you have a spoilboard on top of the original wasteboard? If so, have you flattened it to the machine. By running a shallow pass over the entire surface of your spoilboard you are leveling the spoilboard to the machine. This is typically done with a 1" spoilboard bit.

I do not have a spoil board