Hello, I would like to know how to update the font library on CC. Either for a specific font or just a "grab all " the fonts i have on my pc. A specific font I want to use the Imprint MT Shadow font. I have it on word program when i type up a word document but not on CC. 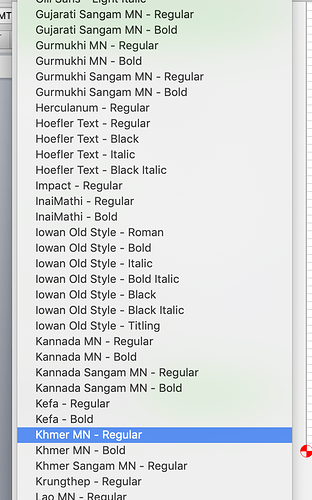 Hmm - you might well have it in the list. With CC 413 on Windows 10 - for some reason the font list is strangely only mostly alphabetical. At first glance it looks alphabetical but then you will see some font names in very odd places ! It seems it alpha sorts sometimes on the last word of the font name before the hyphen.

So scroll down and look under fonts starting with S and you might see it! 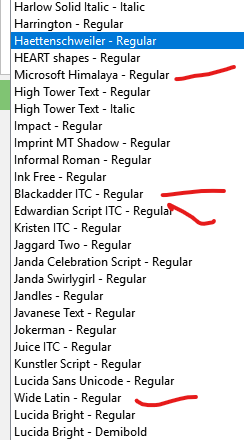 Interesting I did the same and Imprint appears in Word but not in CC. I also have Mojave 10.14.5 I tried Pages and Imprint is also available so it is not a Word/Office only font. I tried CC 316 with the same result.

Maybe @WillAdams or @robgrz may be able to shed light on this.

Did some further research. The imprint font on my Mac is in a .fontsuitcase extension. I went through some other fonts with that same extension and CC did not recognize them either. My solution was to download the .ttf of Imprint font. Right click on it, click font book and install it. When I did that it put it at the very top of the list in the font library in CC.

Don’t know if it was the right way to do it but it worked. I tried some other fonts with the same results .

Great, it looks like you found the answer. It looks like CC does not support that type of font and since they came with the Mac, maybe it should be mentioned under an asterisk in the documentation/wiki that some of the system fonts may not appear and that users would need to download a compatible version.

Expanded the text at:

Fonts are imported from those available to a program running with the permissions which it has. TrueType and OpenType are known to work. Probably any outline platform independent font will. Platform-specific fonts such as Mac OS X .fontsuitcase files seem to not work.

Font list and feature access is limited to that which QT affords, no rich typography, no ligatures, no family-based sorting of fonts. Fonts may be oddly alphabetized due to how they are named internally.

An awesome feature to add to CC would be to display the font name in the actual font like word does. If needed, I can provide the code (I’m a software engineer and do that kind of stuff all day). Having to keep clicking through them to see what the font will look like is kind of a pain.

Yes a preview of the fonts would be good inside CC - but meanwhile - I use this which is really great !
Wordmark.it - Helps you choose fonts

Wordmark.it helps you choose fonts by quickly displaying your text with your fonts.

Being able to do kerning would also be great, it could also be used to address ligatures. I use this function a fair bit in VCarve Pro.

Well it was a ligature I produced by using kerning and had a picture to show.