So on the computer we are suppose to click on the safe to remove hardware tab to remove a memory stick. Any cautions we should be aware of for our machines

Could you send us a screen grab showing the context of your concern and let us know the specifics?

Not sure about Mac but Windows for years has a function to safely remove a removeable device. This procedure makes sure no files are open and that the file system is intact before physically removing the removeable device.

Personally I have removed thousands of usb drives and none of them have been damaged. If you want to use the remove safely feature usually just click on the usb icon and select safe to remove message. You will be prompted when the drive is ready to remove. 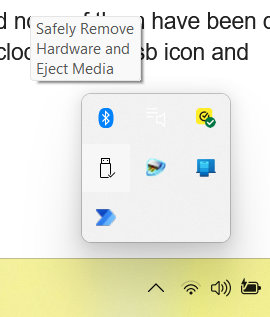 Yep i know how its done on a pc. Just saying sometimes it says usb damaged when plug it back into the computer after removing it from the cnc box

What are you using for a “cnc box”?

Yes, a USB drive should always be properly ejected/removed from the file system so that all files on it will be closed and temporary space restored to available.

For that you’ll need to check in w/ the Onefinity folks, but there should be a way to safely eject/remove the USB drive which would then allow it to be mounted w/o any complaints/concerns.

Any cautions we should be aware of for our machines

I wouldn’t worry about it. You’re not using the controller to write to the drive, correct?
I have an SD card for a 3d printer that has said it needs to be repaired for a decade. I’m still waiting for something to stop working.

That’s one of those odd things with devices with integrated usb mass storage AND serial. Sometimes they are truly separate, others are composite with the firmware being the middleman. Smoothieboard I use with my laser cutter does this. On Mac I eject the usb drive because they say having it mounted and running a job might cause problems if something wants to take up comm to write to the drive.