Thought I’d share a couple simple VCarved signs I made:

For my wife, inspired by Billy Joel’s song “You’re My Home”: 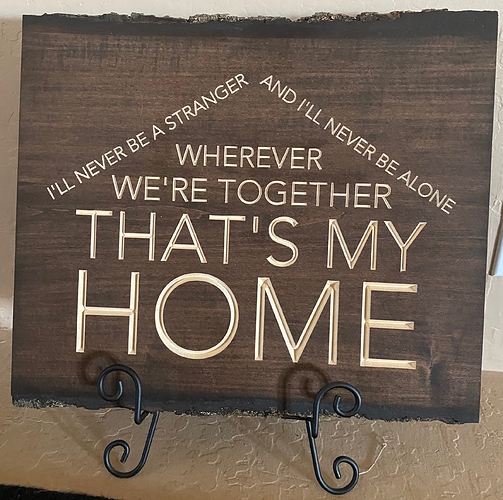 And for my cat-hoarding daughter: 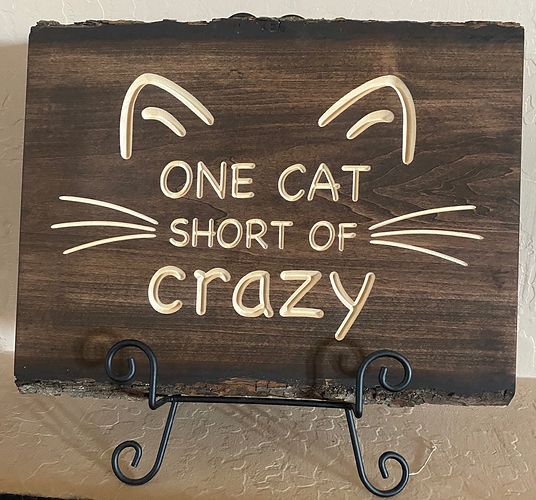 These are both from a 3-foot basswood plank from Hobby Lobby (normally $30, but they frequently have 40% off coupons). Sanded, wiped on a coat of “java” gel stain, and then to the Shapeoko XL.

The “Softwood” feeds & speeds suggested by Carbide Create worked great (#302 Vee; Feed 45 ipm; Plunge 12 ipm; RPM 18,000). Basswood cuts like butter with no chipping, and it has a consistent light color that reveals nicely against the java stain.

I have not used Bass wood before. I would have thought since it is a softwood the stain would blotch like on pine. Did you have any trouble with blotching? I have used General Finishes Java Gel stain and it does cover well but does not penetrate like oil based Minmax.

The pictures looks like the wood has the bark on it. What kind of top coat did you put on it if any. Some woods like oak and maple have the bark fall off when dried. I have a bunch of mesquite that the barks seems to sick like glue even on dried wood.

Surprisingly the basswood does not blotch like pine (but it will if you don’t sand it). Just sand it well to 220 and wipe on/wipe off the gel stain (Mine was General Finishes Java Gel Stain). I didn’t use a topcoat - I like the way it looks without.

The wood does have bark and it doesn’t fall off when dry. Here’s a lousy screenshot of what it looked like before stain:

Blotching is more to do with variable density in the wood. In pine it is the earlywood vs. late-wood densities. Cherry blotches (but if it is severe enough you call it figure) due grain reversal. Maples are the same way. Any wood with “curl” can blotch but in that case it is desirable.

Basswood trees are deciduous so they are a “hardwood”. Hardwood vs softwood has really nothing to do with the density (where it falls on the Janka scale) but is a classification based on botanical features like leaves vs needles, seed formation, etc.

What’s the width of that board? You mentioned 36 inches in length but…

I’ve purchased a few of these - they average 12" in width. They sometimes have narrower ones (~10") but I like the wider ones for signs.

Easiest way to avoid / reduce blotching when staining is to use a wood conditioner first. It’s available for both oil and water based stains. Makes quite a difference in the quality of the stain look. Hope that helps.

Any particular brand(s) you can recommend?

I generally use Varathane and have had no issues with it. Just FYI it’s nasty stuff, smells awful and you will want gloves and a good quality paint respirator.

Great signs by the way!

This is some of the best stuff I’ve used. Not cheap by any means but has worked well for me on solid cherry, maple and poplar and on birch plywood (baltic birch). Never tried it on basswood.

However Charles Neil, the man who “invented” this formulation recently passed away and I while I see that the store link is still active I don’t know if orders are being filled. At one time this was sold through Woodcraft in the United States but I don’t know if that agreement is still valid either.

Not much help when I say “this is good stuff” but then “don’t know if you can still get it”. I’ve still got maybe a pint left and don’t use it frequently so haven’t needed to re-order. If I do re-order I’d probably switch to the concentrate version since I’d be buying less water over the Internet. Water I have at home…

If I couldn’t get more of this I’d probably go back to using the General Finishes brand of pre-stain conditioner.

Another option is to use a spit-coat of dewaxed shellac which can work pretty well with closed grain woods. And if I’m using just waterborne dye (not stain/pigment) I’ve found that getting the piece quite wet first helps moderate the absorption rate of the dye.