Not sure if it’s the version or if it’s my computer being stupid again, 2nd time today if it is.

Anyhow has the new version 434 just got mdf as a material or has my computer messed up.

Just checking before I roll back versions.

Maybe I’m wrong but the MDF in Carbide Create is for previewing and does not change any settings.

think its a bug. it only lets me set up stock as MDF.

trying to lcate build 433 but for some reason i can only get this 434.

I’m getting the same on my machine running Windows 10 — MDF is the only material available to choose in the drop-down: 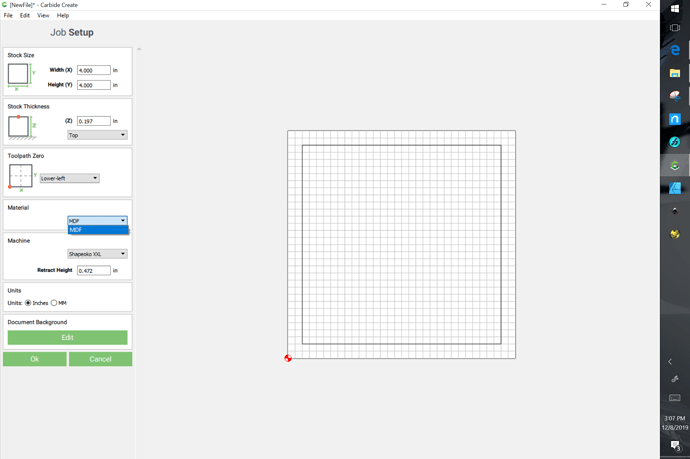 glad its not just me then. i was beginning to think this wood glue was getting to me

OK, the material preview is limited but there is no incidence on toolpaths or anything else right @WillAdams?

material Is used for f&s so this does matter

Well it does but CC does not take this into account when calculating toolpaths, you need to do this by hand. I just checked V433, the recommended/default remain the same if you change the material.

Just an FYI- the Unstable releases are not tested in any way. They’re posted for us to share for testing and for those brave users who want to see what’s coming. An unstable release marked “Internal use only” is probably not something you want to use.

I assume you do take bugreports for them?

If it’s a release we’re announcing in here to solicit feedback, like we did a lot earlier this year, then yes. If it’s marked “Internal” then we’re probably sharing an incomplete build (as this one is) with others within the company and bug reports are not helpful because it’s a work-in-progress.

It could be that the three-level release structure, Unstable, Beta, and Stable, will cause more trouble than it’s worth as we get more and more users actively watching for new releases. Maybe we’d be better off going to only Beta and Stable and sharing Unstable internally via Dropbox or some other mechanism to avoid confusion. It’s definitely something to consider in the coming months because we’re hoping to begin another bunch of releases soon.

In my defence I didn’t read the internal bit

I dont mind trying anything at any stage as long as it’s possible to roll back should it be too unstable. Sometimes the best bugs are ironed out by accident.

Before you update, change the name of your current application to Carbide Create 4XX so you can update and keep the old app. The new one will be called Carbide Create. You just have to go back to 4XX to use the old one.

433 is now linked on the Beta page at https://carbide3d.com/carbidecreate/beta/