At any point has the shapeoko 3 waste board changed? I have some plans provided by Shapeoko but they don’t match mine - lots of extra holes I don’t have?

Yes. The initial design for the SO3 used a two-part wasteboard, and a system of cross-straps and front-to-back straps — this went away when we switched to the one-piece wasteboard design which current machines use.

There’s a bit of discussion of this at: http://www.shapeoko.com/wiki/index.php/B.O.M.

The current files for the wasteboard designs (as that page notes) should be:

I got you, thanks for cleaning that up.

Carbide offer a threaded table, do you know if this is aluminium?

Yes, the threaded table (which is awesome!) is aluminum and anodized black.

interesting, is it as thick as the wood one? I can’t see that it would need to be?

I’m pretty sure it’s as thick — I think the reason for that was to make dimensional calculations easier, and to provide adequate length for the threads.

fair play… maybe one day I can afford to have one shipped across the pond.

It would almost certainly be cheaper to have it made locally. A piece of aluminum that size is about $100 US. I’m sure you could find a local machine shop to fly-cut it flat, drill the holes, and hard-anodize it for you for less than $300 + shipping. You could even save some cash by drilling & tapping all the interior holes using the Shapeoko itself.

I’m getting a friend of mine who owns a big Hass to make me a steel wastehboard. I think we are going 1/2" on it. That would gain me another 1/4" for Z clearance. I’m tired of running screws into my board. I do have some threaded inserts installed but not near enough. My wastehboard is truly becoming a waste!

I just knocked this up - it’s a design for a waste board with holes for M6 threading - it’s 10mm thick with over 300 thread holes!

You actually only need the 8 recessed holes on each long edge, all the rest of the recessed ones can be dropped, you won’t need them. I’d also seriously question whether you need that many threaded holes - I’d get rid of at least half of them, unless you have plans to work on lots of small or oddly shaped parts. I’d also step up to a thicker plate if you’re planning on using aluminum, at least 12mm and as much as 20mm. Just my opinions though!

fair point on the recessed holes actually - as it would only be using the edges - even on the old wash board like mine has as it would be held in place by the metal.

I also agree on the holes - I sent this to a buddy of mine in china and adding 300+ holes drove the cost up by 10 fold. What spacing would you recommend? I have never clamped anything to my board but glued it down in the past.

In fairness it could be thicker but the thicker the stock the more it will cost.

There’s an observation at: http://www.shapeoko.com/wiki/index.php/Workholding

A comment on spacing — some sort of ratio (phi?) is likely more useful than even spacing.

When I did my first threaded insert table, I was constrained by local availability (small town, I cleared out pretty much all the stores w/in driving distance): http://www.shapeoko.com/forum/viewtopic.php?f=35&t=6045

and eventually arrived at this:

While I really like the centered holes, the argument is that when flipping, aligning along the center doubles any error.

Probably the best thing to do is grab a half-dozen or so projects like to those which you plan to make which have parts of varying sizes and work up work-holding for them. Definitely suggest you tour your local hardware store, identify suitable blanks which can be easily transported home and cut down to make spoilboards — worst case is you bolt such spoilboards to the wasteboard and then screw (suitably flat) stock to it.

The other thing which I contemplated was an array of holes starting from the bottom left corner, something like: 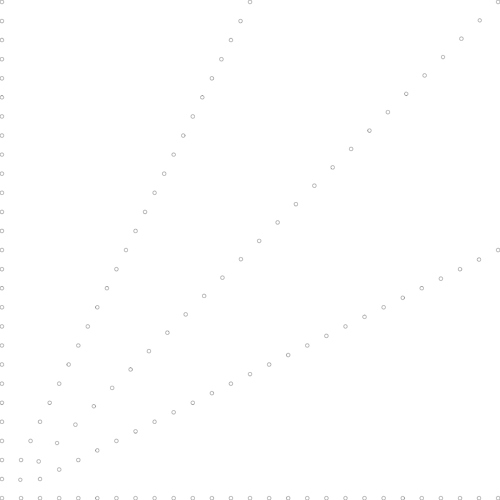 Naturally the 9 holes in the bottom left would be sized around the smallest fixture one would be likely to use, the spacing would be more even, and probably I’d use Phi to space out the holes along the diagonals (I’d probably keep the evenly spaced holes along the bottom and the holes on the left would be slightly less than a clamp’s length outside the work area — I’d also strongly consider similar lines of just outside the work area at the back edge of the machine and along the far right).

Last consideration: spacing of the holes along the outside edge should be at least almost as long as a clamp will reach, and at most, slightly less than the clamping distance afforded by two clamps.

Thanks for this, very good. I have drawn up some plans to send over to a couple of milling companies - I hope to hear back tomorrow but the more holes the more it costs.

I’ve settled on a basic cross - I can add them later if needed with my tap.

I have a few questions before my buddy mills my new waste board. If we go with 1/2" steel will I need to use the bracing pieces used with the MDF board? If so, should I go with a thicker steel and eliminate the braces? Is there any reason not to use steel? I don’t want to do a total rehaul of the table as I’m thinking of upgrading next year.

Hmm…my birthday is the end of this month! Any thoughts on upgrade discounts for previous owners Carbide crew?

AIUI, a one-piece wasteboard, even of MDF makes the wasteboard alone adequate — the cross straps &c. dated back to and were specific to its inability to provide the positioning cues which arguably is all the wasteboard is necessary for (anyone inclined to do FEA?). I’m kind of surprised no one has done an open bottom SO3 a la the sort of things folks did w/ the SO1 (probably 'cause it’s a lot more effort to move).

Reasons I wouldn’t use steel:

The reasons to, are way, way cool of course. Ever read about Bill Mauldin’s Jeep modification during WWII? He had an armor plate (1"?) welded to the bottom of his Jeep in the event of a landmine — said it made the thing ride like a dream.

I think I posted the thickness measurements of the two aluminum tables on the wiki — let me know if you don’t find them and I’ll measure mine when I get home.

For me moving the machine is a non issue as I have it on a roll around heavy duty table upstairs in the “craft” room.

As far as breaking bits I feel pretty confident in the fact that I haven’t crashed one in that manner thus far. I really wish I hadn’t made that comment!

Pretty cool about the plating on the jeep. I don’t think there is any unwanted vibration from the machine but I wonder if there would be any performance improvements using the steel board.
I did think about somehow having a table come up from underneath to enable large pieces of material to be milled. Somehow have a leveling mechanism for the Z plane. That would be cool if it could be done.

I’ll check the Wiki on the table thicknesses.
Thank you!

I’ve been considering putting my XL on some sort of dolly to roll it around — will probably have to once my son moves out.

Murphy was an optimist.

Good point about the mass and vibration reduction.

Yeah, having access to the underside of the machine to load material is a really nice aspect of the update from the original SO3.

A whole room for your craft! Lucky buggers mines in the garage which is freezing in the winter.

I too was tempted by steel although weight is a concern.

In the UK material is very expensive. I have had one quote at 450 quid for a washboard to be made up. Now I’m considering 2 pieces of 5mm thick aluminium on top of each other and marking/drilling/tapping it myself - Might get one for under £200 then…