I just noticed this a couple weeks ago on my Nomad: 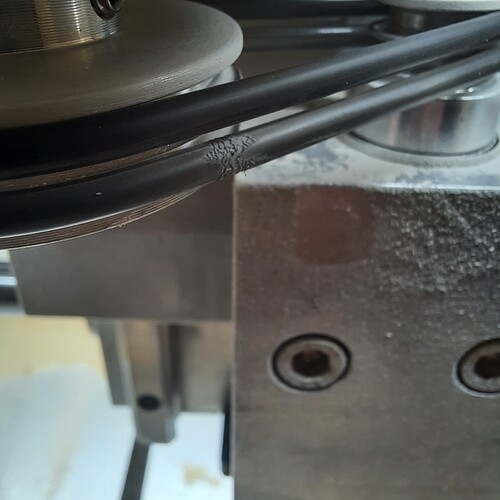 But it kind of got lost in the sea of other issues I was having and I hadn’t used my Nomad in that time except to jog it around a bit and cut myself a quick right angle clamping block. I did a little bit of cutting yesterday, and noticed it now looks like this: 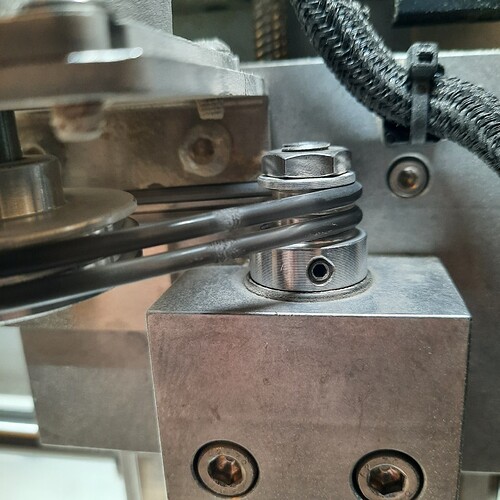 It looks like wear and tear from friction. It feels rough and I’m pretty sure the roughness wraps all the way around the belts (or whatever they’re called…).

Anyone know what’s causing that, and maybe how to fix it? How worried should I be? I was hoping to get back into it today after being so discouraged with all the issues I’ve had the past few weeks.

Contact us at support@carbide3d.com and we’ll work out getting you replacement belts.

I’d really like to know if this is normal wear and tear, because it doesn’t seem like it, given that it’s in the exact same spot on both belts and one of them seems to have developed the issue very quickly. I’d also like to know if it’s safe to still use the machine in the meantime, or if I should leave it be until I get the replacements.

The issue you might run into is one or the other of the belts breaking. I would continue to use the machine. The belts look like they are mostly solid with the rubs on the outside.

That ALMOST makes sense (though I don’t remember anything like that happening), but it’s strange that it appeared on one belt first and then on the other one later, in the same spot. But the belts are fairly short, it’s certainly possible it’s a coincidence. But that does still mean that whatever happened, happened at least twice, which is concerning.

Do your belts typically stop in the same place, or close? Or did you rotate them to that position for the picture?

When it first starts up, there could be a lot of tension until the slave pulley catches up with the drive pulley. Perhaps it’s a result of the belts repeatedly stretching on startup? How old is the machine? Roughly how many hours has it ran?

Do your belts typically stop in the same place, or close? Or did you rotate them to that position for the picture?

Not that I’ve noticed, but I’m not sure how I would ever tell except now that there’s such distinct damage on them. I’m going to try running it a bit today, so I’ll keep an eye on that. And no, I didn’t rotate them.

How old is the machine? Roughly how many hours has it ran?

I bought it in January. I couldn’t say how many hours it’s run total since them. Maybe 7-10 hours on a busy week, but there have been quite a number of weeks where I haven’t used it at all.

To me it looks like the splice where the o-rings was glued is breaking down.

The older Nomad 883 Pro uses a single standard timing belt. Mine’s in perfect condition after hundreds of hours of operation.

The spindle only goes up to 10K on a Nomad 883 Pro - is there a limitation on how fast timing belts can go that caused the Nomad 3 to be changed to use two rubber bands?

My understanding is the switch to the round belts was to reduce vibration at higher speeds.

The belts are the same diameter and driven from the same pulley. So in theory they should but in practice one may not spin at the same rate as the other. So I dont think they would drive together in practice. One belt may be slipping more than the other. I would just get some spare belts to keep on hand in case one of the breaks. I would replace them in pairs due to belt stretch. It is like tires, you never replace one tire on an axle you always replace all the tires on the same axle to ensure traction.

I think my best bet is to replace these ones, and I’ll ask if I can get a spare set as well while I’ll am it. I just need to get past my mountain of paperwork before I have the mental energy to sort that out…