What are your go-to MDI commands?

For those who use the MDI interface, I’m wondering, what your go-to, one line G code commands are?
I know I have certain work locations I keep canned for example G53X-350Y-350Z-5F6000.
I’m curious what other gems are out there and why do use them?

Don’t forget your G1 motion modal with that, or, if using rapids, use G0 and omit the F-word

And see this is why we ask questions

I’ve also taken a look through your scripts for cncjs (I’ll be converting eventually), and your quite fluent in the G-codes. Do you have any other good MDI one liners for people that are sill in the CM camp? I figure you’ve seen a couple of questions that come up over and over agin throughout the years.

The $J jog commands work like a G1, so they need the feedrate, which is not modal in this case. That means the feedrate in the jog doesn’t apply to anything after and it does not assume a feedrate that was previously defined.
G53 is also not modal, and it will assume the current motion mode (G0 or G1). That said, you can explicitly define the motion mode on the same line as G53.

My most commonly typed command in any sender is G10L20 X0Y0 to set work origin.

Hmmmm an A axis huh?

Yes, well I am almost done building it.

Now I’m doing some run-in to help seat the worm and worm gear. I got the backlash down to 36 arcseconds and the worm gear end play to 0.0005" . The 4-jaw still runs out 0.004" but that’ll be the easiest and last item to correct.

Now I need to figure out how to write a GRBL Post Processor in Fusion 360…in the meantime I will handwrite my GCode…like old times… for the first few projects to make sure everything is good to go.

First project is to finish a Steam Engine that I started 45 years ago…(yes you read that right). I never had a good machine to cut the rotary valve…and well, I will soon!

Third…Oil Filter Cooler for my Harley (boring), but good practice.

But its the fourth project (a 2 year est. project) that I am the most excited about and will post some photos here in a few months… (World’s first as far as my research says)…IF I’m successful. 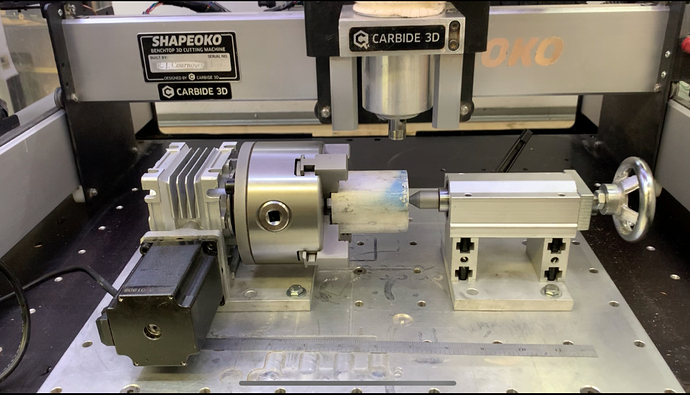 Well, of all the turns I expected this thread to take… That is AWESOME, I thought you were messing around with the A axis! I mean you got to post a video when its running!!!
How did you connect it to the controller, or is it all custom? How did you mount the worm gear drive to get .004" runout? What’s your expected tool clearance? I have so many questions…