What I would love in Carbide Motion

I would love a “hot spot” in the Rapid function between “C” (Center) and “S” (South). A place where a bit change drops the bit onto the table.
Thanks,
Rex

I agree. Or even better, be able to pick my own tool change location. Trying to remember to put a catch tray under each time is not working. Bits falling on the floor all the time.

I agree that there should either be more hard-coded locations, or better, like 10 user-defined x-y locations (input coordinates or capture current location to set). That would be awesome! I can’t imagine it would be that hard to code…

Trying to remember to put a catch tray under each time is not working. Bits falling on the floor all the time.

I use a small sample cut of pile carpet to catch mine ($1 at Menards, not sure about other big box hardware stores), shown with ratcheting wrench for Makita nut: 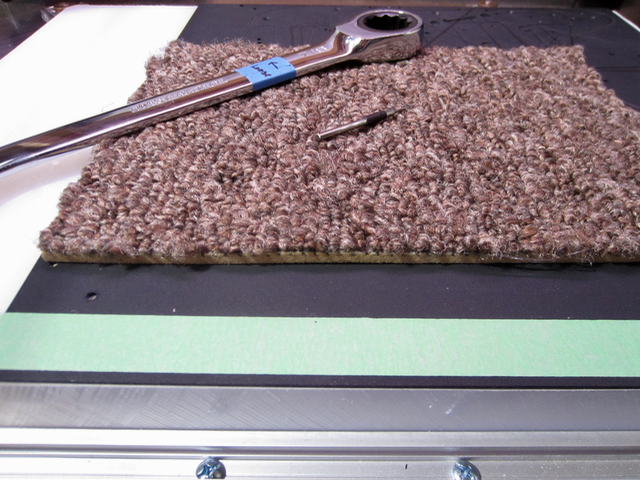 Stephen,
I did the drop zone shop towel for a while and it just kept getting in the way or forgotten.
I do notice the “ratcheting index” on your wrench, that I will probably take into my workshop.
Thinking, and correlating several programs abilities, I use LightBurn for some stuff. With LightBurn I can “hot spot” any area in the field and move the laser to that point. Is that a better overall solution? Take all the current hot spots and make them grey outs, secondaries, and allow “user picked” hot spots as the primary.
I do like the front left hot spot as it tells me how close I can put my material to the left front edge for engagement.
No one answer is going to make everyone happy.
Thanks,
Rex

I think the main goal of Carbide Motion is to make it simple for those new to a CNC. You follow the prompts on a simple interface and you’ll be successful.
There are definitely more feature rich / customizable interfaces out there for GRBL machines. If Motion becomes too customizable, there will be a lot more threads started here that go on for days only to end with “I found the issue. I put an extra zero in my toolchange location!”.
I think, if you want all the flexibility, you’ll have to try another sender.
@Griff likes when his machine moves to tool change locations in separate X & Y motions because it “looks more robotic”

…Motion won’t give you that.

That is understandable, maybe there could be an ‘advanced settings’ tab on the settings page (like VLC player does) to show more in-depth ‘operator features’…

As I mentioned in the thread I created 2 days ago, I am really missing the homing-cycle button on the Jog/Rapid Position page (it was there in CMv3.xx), so this, or user-defined locations, would be awesomely useful in my workflow…

An open source, embedded, high performance g-code-parser and CNC milling controller written in optimized C that will run on a straight Arduino - gnea/grbl

and more are listed at:

and there are a couple on the commercial page: https://wiki.shapeoko.com/index.php/Commercial_Software#Communication.2FControl.2FG-Code_Interpreter

My observations from here the Shapeoko forums and Reddit and support:

I will check these out. Up until now I had never considered using a different g-code interface, but it might be time to ‘toe in to that pool’…

For me, I am okay with the current 9 locations available (but I would never say no to more), but I would love the ability to have a gcode command to move to one of the 9 currently defined locations. I’d like to be able to put in the command to move to the center of the machine from wherever the spindle is located, and regardless of where the work coordinate zero is.

I’d like to be able to put in the command to move to the center of the machine from wherever the spindle is located, and regardless of where the work coordinate zero is.

You could set your G28 or G30 location there.

I set my Shapeoko back about 5 inches on its bench, then created a drop zone out of low scraps of wood directly under the BitSetter parking location. No more dropped bits, no more rolling off the bench!

The only downside is that I have to slide the shapeoko to the edge of the bench if I want to do any front-clamping - which I have not had to do more than once. I just kept the edges of the drop zone lower than the bottom of the Shapeoko so it can slide over the top of the zone. 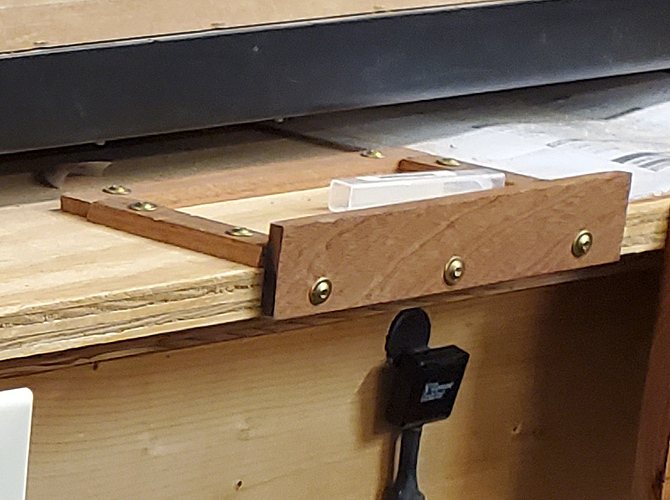 If you want to jump into CNCjs and some of the automated controls using SuperPID, I did a write up here:

This one has details on setting up the custom buttons in CNCjs to move the router to predefined locations, which the use case you were looking for:

First - thanks to everyone in this forum that has supplied a wealth of information on how to use cncjs! Here’s one I discovered, but hadn’t seen documented yet. One thing missing for me was rapid positioning to certain areas of the board. It’s a nice feature in Carbide Motion. Started by creating a bunch of macros, which worked, but a little clunky to execute. Then I stumbled on “Custom Commands” in the Axes widget. Click the gear icon and you can create your own command buttons: [Capture1] D…

The CNCjs setup was simple, especially using the Electron app on Windows. I ended up loading it to a Raspberry Pi 4 and serving it out as a webpage to whatever device I want. I like this setup better because I don’t have to worry about what’s going on with the computer sending the gcode. In the middle of a long run my Win laptop decided to do a “update reboot”

, luckily I was able to save the job, but it left a burn mark where the spindle sat for a few moments before realized what was happening. For $40, the dedicated RPi can spew out gcode with no interruption, well worth the cost.

The RPi setup is well documented on the CNCjs page, so won’t go into that here. Adding the webcam was a bit of a trick, but not bad if you dig a little.

I am a big CNCjs fan! Now looking for a CAM software that will run on Linux (Windows has really irritated me…). Estlcam has been my go to, but getting some errors that I can’t figure out (not a programmer by any means).

Thank you @dandangerous, I appreciate it!

I will digest this info and give CNCjs a try…