The first one is based on this double-sided damascus steel blank from http://www.damascus-blanks.com/products/damascus-high-carbon-steel-blank-blanks-blade-knife-making-knives.php (unfortunately it seems to be sold out now): 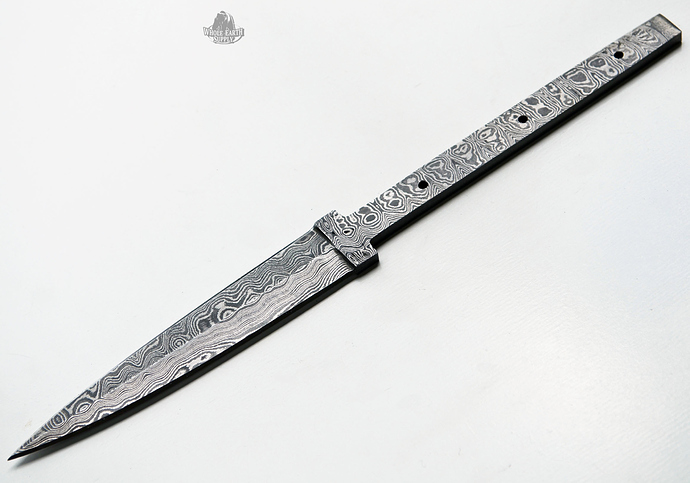 I measured the dimensions and came up with a design in Fusion 360 based on this basic shape:

After a bit of extruding, corner rounding, and subtracting a box model of the knife blank, that becomes: 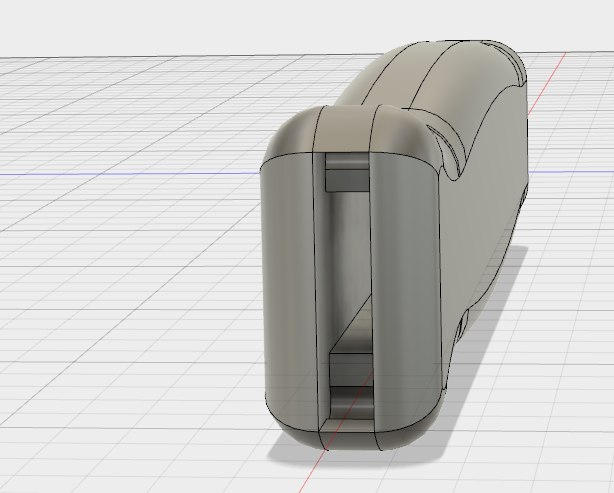 At first I split this body through the middle. The resulting two parts would have required two-sided milling, but then another article I read gave me the idea to split the body into three pieces that could be milled one-sided in one pass: 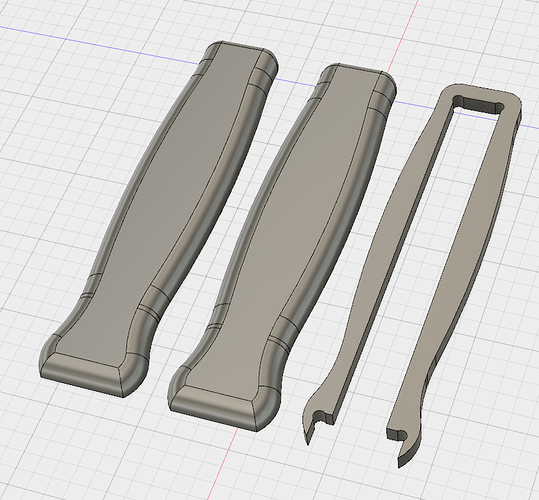 I set up a Fusion 360 CAM job to produce the G-code and milled it out of some walnut boards: 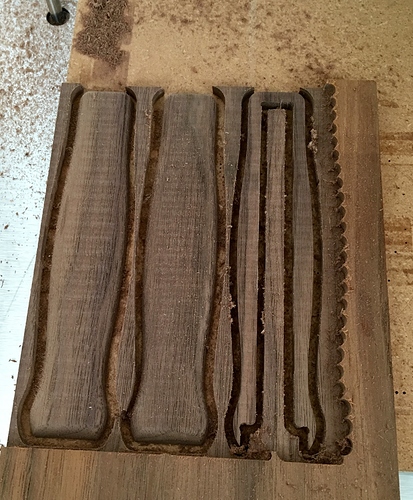 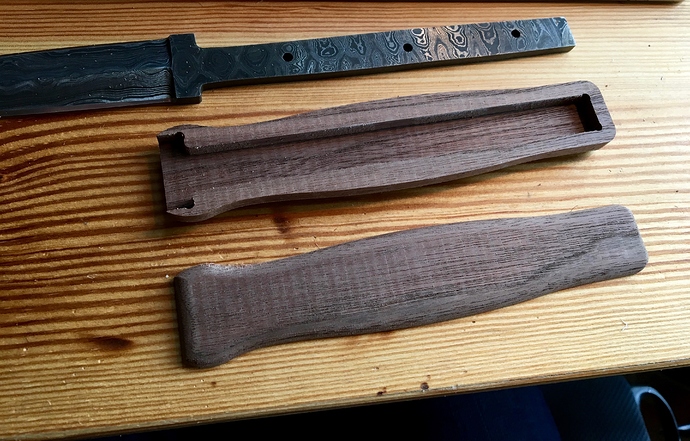 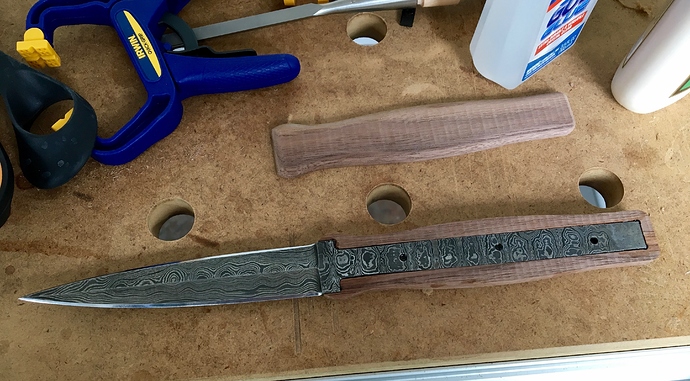 This first attempt (which is not the final design shown in the CAD models above) worked, but the resulting handle looked and felt a bit too long. That length was a result of the knife blank’s back part, so I cut off two centimeters of that with a hack saw and shortened the 3D model accordingly. The new version looked more pleasing, here’s a comparison (first attempt on top, second, shortened, on the bottom):

The new version glued together and sanded: 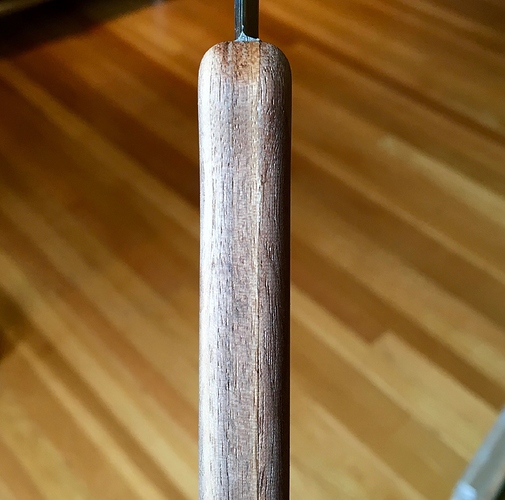 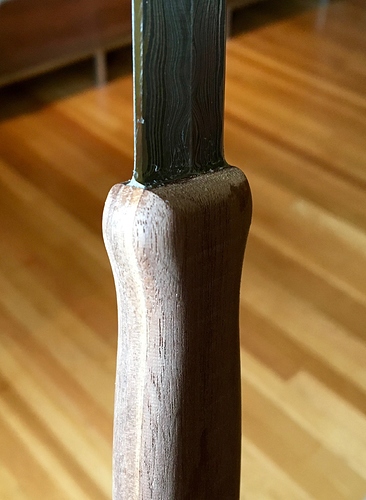 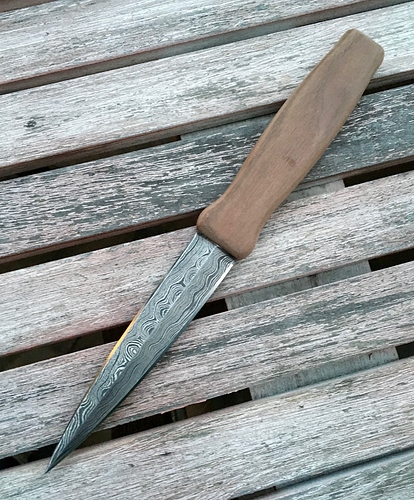 After a first coat of linseed oil (I used Tried & True Danish Oil): 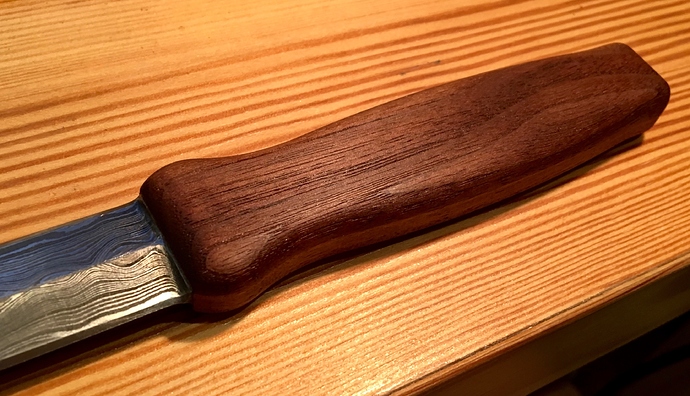 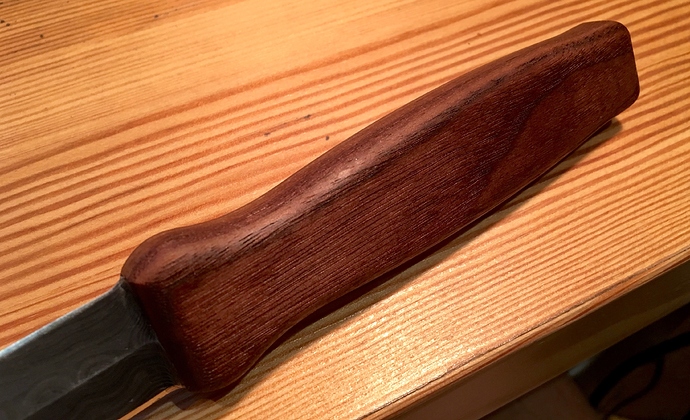 The second knife is based on a single-sided blank. I adapted the handle design from the first one and flattened the top side, among some other changes. The design for this one is at http://a360.co/1P0rNKq. I used a lighter colored wood for the middle part. 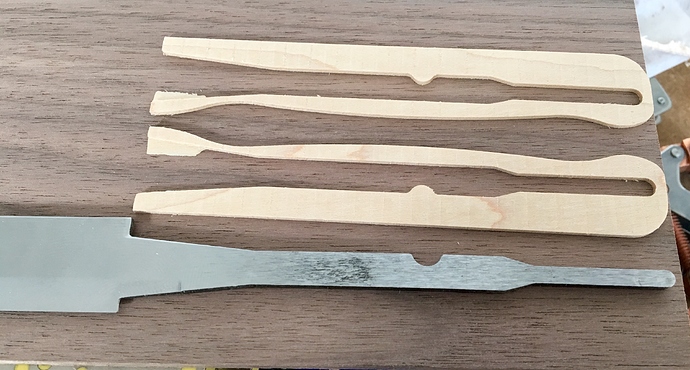 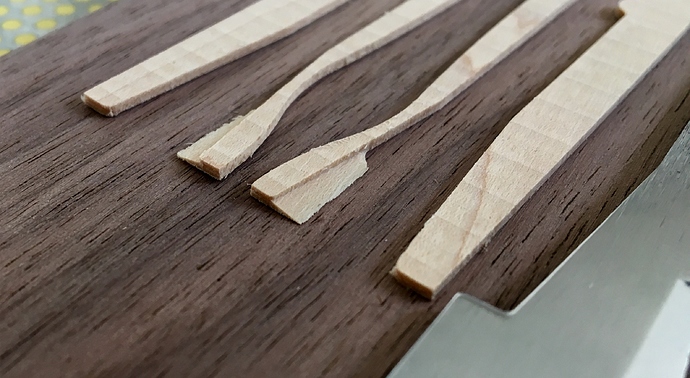 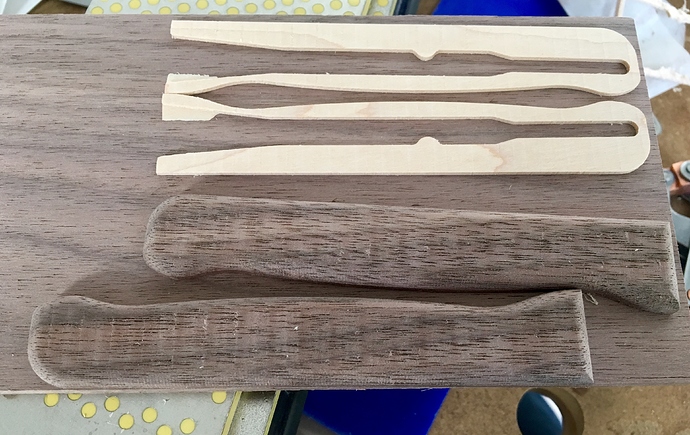 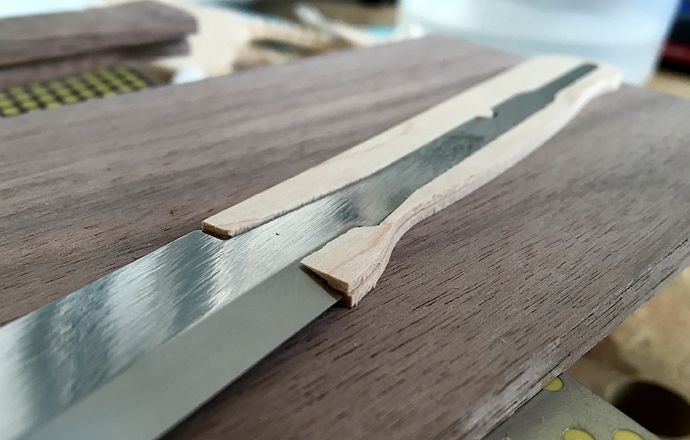 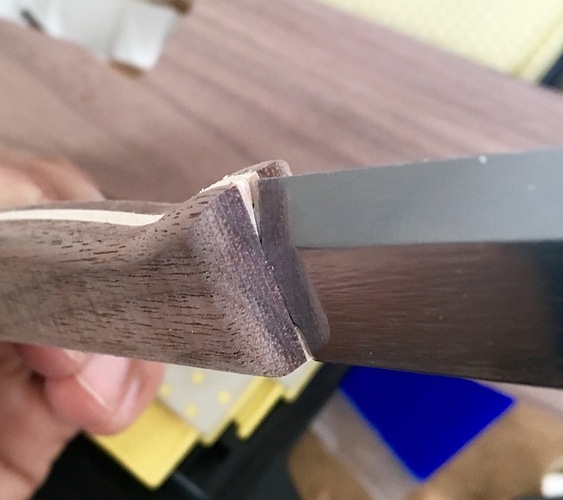 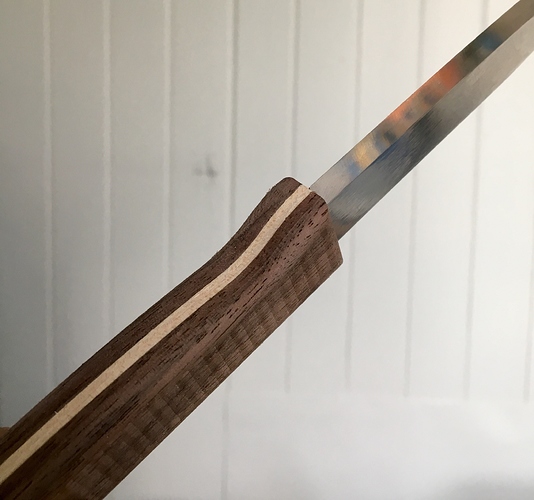 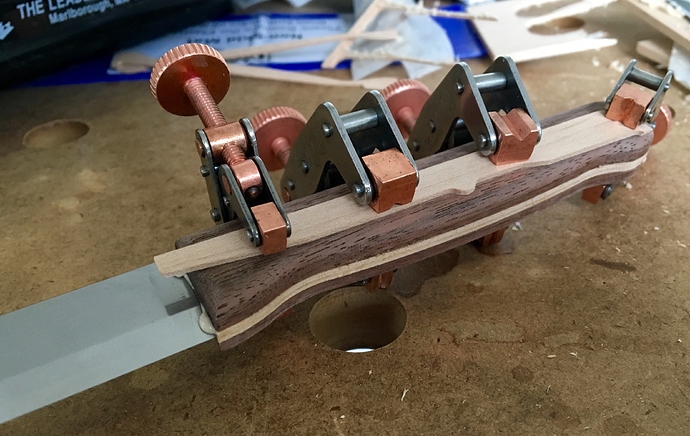 After three coats of linseed oil: 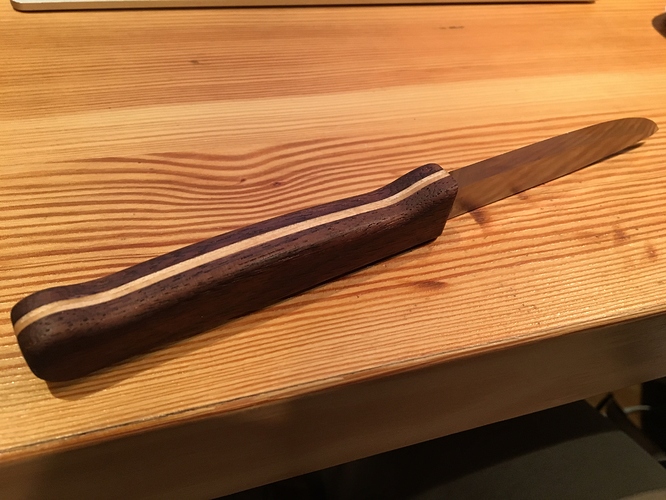 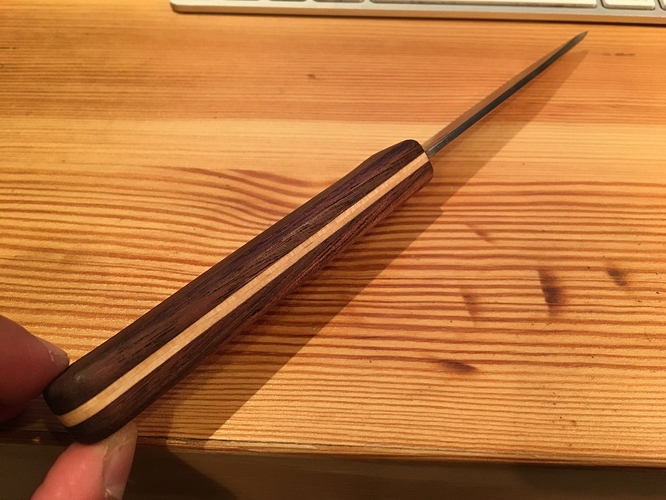 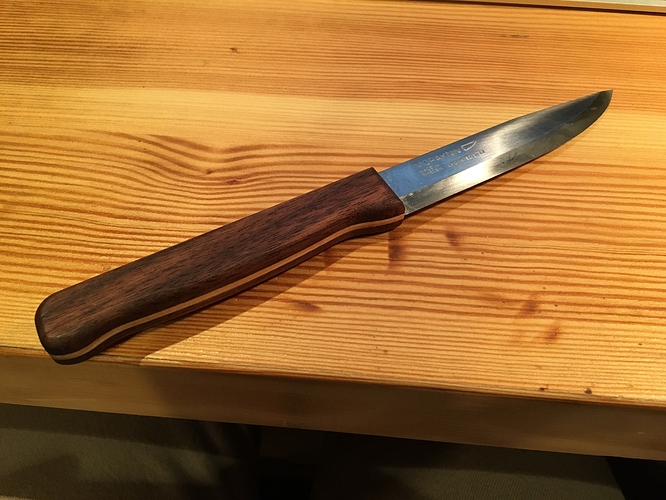 nice but shouldn’t you pin it?

also, make something cool out of the hacked off piece of damascus

Yes, pinning the handle would be nice, that will be a step up for the next time I do this

I have to read up on that.

Thanks Apollo, glad you like it. Another step up for next time is adding inlays according to your instructions. Thanks for the link to that supplier, I’ll check them out.

Do you find the workflow pretty easy with the Nomad? I’ve been debating on making the purchase, and I use Fusion for 3D modeling and 3D printing. Awesome design and outcome! It turned out great!

I absolutely love Fusion 360 and I use it both for the Nomad and for my 3D printer.

I tried a few 3D apps for OS X, and as far as I know Fusion 360 is the only affordable yet not dumbed down 3D modeling solution for the Mac that also has a UI that is not unbearably ugly. It’s very powerful and fun to use.

For the Nomad, I used to export STL and import that into MeshCAM to produce Gcode to feed into Carbide Motion, but now I use Fusion 360’s built-in CAM and I like that a lot. It is very flexible and lets me combine the different passes step by step. I also like its toolpath visualization and cutting simulation. Now I go from Fusion 360 straight to Carbide Motion and it works great. I saw that Autodesk just added a Carbide3D post processor driver to one of its most recent updates.

BTW if you use Fusion 360, I highly recommend a 3Dconnexion SpaceMouse (I use the wireless model). It makes a huge difference for me, I am way more productive with it.

Yes. I love it too. I didn’t know that they added the Nomad to the driver list. That’s great!

I’ve been thinking about getting the 3D mouse, but I’ve been on the edge. Is it really that good?

It really is that good. It’s very sensitive, so it takes some time getting used to it, but after that it feels like an extension of your brain and using mouse and keyboard will feel cumbersome and slow. I sound like a salesperson here

You’ll probably want to start out with the “dominant axis” mode enabled, but after a while you can disable that.

Here’s a screenshot that shows the carbide post-processor. I haven’t actually used it yet myself, the “generic mach3” one has been working well for me.

Ya… I may be looking into getting one now. Oh hey! There’s a student discount.

Crap… What have you done to me? lol That’s awesome though!

I did a second project and added more photos, check out the new “Single sided” section of the post above.