A long while ago I posted about trying to find a better 65mm mount for the Z-plus to try and limit vibration. Some folks suggested that is can also be caused by the V wheel assembly on the X axis, since it isn’t inherently stiff in that direction. After rechecking all the V wheels I was still having issue with cuts in the Y axis chattering while my X axis cuts were silent besides the router just being on. I am still looking to make an improvement spindle mount, but I did find an interesting solution.

Last week I was finishing up a coat rack for my entry way and was still having bad vibrations in the Y axis cuts.

The finish cuts were only cleaning up the 0.010" stock to leave and sounded better, but not great.

Last night I put a 9.5" x 2.75" of walnut up on the table and clamped it with 3 gator clamps. (Rock Solid) I made an adaptive clearing toolpath in fusion with the same settings as above, but feed rate was upped to 72 IPM (0.003" IPT). As it was cutting I was varying the feed rate on both X and Y axis cuts. I had to drop down to almost 20 IPM to lose the vibration in the Y axis. As a leap of faith I decided to see if a higher feed rate could possibly help. It sounded bad up to 90ish IPM and then suddenly went as quiet as an X axis cut around 100.8 IPM. I was only able to get it up to 115.2 before I was running out of material, but I was happy to see improved results.

Anybody else experience results like this? I’ve tried similar things in plywood, but I think the DOC and WOC at that time were too high to really punch the feed rate.

Depending on how sharp your cutter was, you may have ended up with an actual chip thickness small enough that the cutter was half-cutting half-rubbing, which made it bounce on the wall, producing chatter. Increasing feed rate to 100+ ipm effectively increased chip thickness (that’s exactly what chip thinning compensation does), enough that the endmill started taking large enough bites that it plowed through material and stopped rubbing/bouncing on the surface.

The X versus Y difference may just be related to wood grain ?

It may also be that increasing the total force caused the slack to be consumed by the cutting force and reduced the low reaction force region for chatter to develop, like the old car with loose steering, it’s only good once in a corner.

Chip thinning is definitely working at the low stepovers and it does make sense that I may have just not had enough to grab onto. I’ll have to try some heavier stepovers and see how it behave in both axis.

I have tried both grain directions in Walnut and the Y is still much worse than X in both setups.

Liam, that was my thought as well. It was always being pushed back from the cut and wasn’t allowed to spring back.

Did you try changing the speed on the router too?

On Aluminium I’ve found that for heavy cuts there are specific regions of spindle speed and feed speed that work and others that just set off the resonance of the chatter.

I can’t explain them yet but fiddling cutter speed both up and down is a good second axis to add to feed rate.

I have tried it in other cuts, but not yet in this setup. I’m guessing it has to do with how much HP the router can make relative to the given cut. You might be able to get it to cut better at higher RPM if you can keep the X/Y axis loads within reason.

Ive found that this kind of chatter is common on higher depth/low width cuts. On adaptive you’ll especially hear it when the machine transitions x-y and in some cases like this, it only shows up in one Y direction. 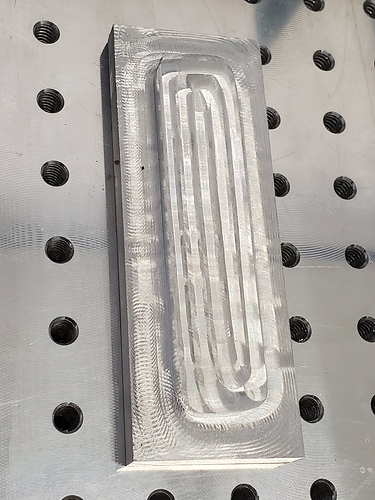 Additional load like you added can help stabilize the cut or you can lower the depth and increase cut width to stabilize as well.

There’s usually a sweet spot for both styles of cutting and definitely bumping your rpm wouldn’t hurt available power.

Isn’t it 0.0022" and wouldn’t doubling the router speed halve the cutting forces while still maintaining an “acceptable” 0.001" chip thickness? But, maybe that would further de-stabilize the cut?

Additional load like you added can help stabilize the cut or you can lower the depth and increase cut width to stabilize as well.

Isn’t it 0.0022" and wouldn’t doubling the router speed halve the cutting forces while still maintaining an “acceptable” 0.001" chip thickness? But, maybe that would further de-stabilize the cut?

Agreed, the higher RPM would be beneficial anyway. Further reducing the chipload…sure, as long as one uses a perfectly sharp cutter (as it should be).

I’ve noticed issues on my machine cutting in Y as well. I always try to align the wood grain with the Y axis to help compensate. I think it’s due to the v-wheels not handling the torque very well in that direction. In the Y direction there is a force trying to rotate about the Y axis rail due to the cantilevered Z axis and router. The v-wheels are not designed to handle load in that direction as well. When cutting in X, the load is applied along the direction that the v-wheels handle best. Guess it’s time to go buy a Shapeoko Pro and get some linear rails.