Oh and one issue with stickout I’m curious about other people’s opinions on. I realized my plan to reduce stickout was an issue because the cutter and shank diameter change. I did follow through with my plan to setup the depth by aligning it with the wood, which worked well, but some of the collet is now jus grabbing air because the transition between diameters happens higher up. What do people think is more important, reducing stickout or maximizing collet ‘grab’. I need to pull the collet off and visually see how much it was still grabbing I think. 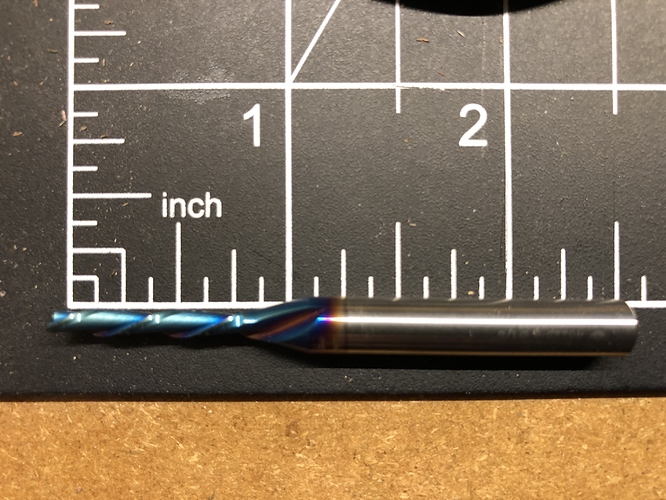 as depicted in the geometry window it appears to be everything below the collet, but there’s an area here which even if it’s in the collet wouldn’t be grabbed by it. I’m going to go check in a few to see how much of the actual shank is engaged with the collet. 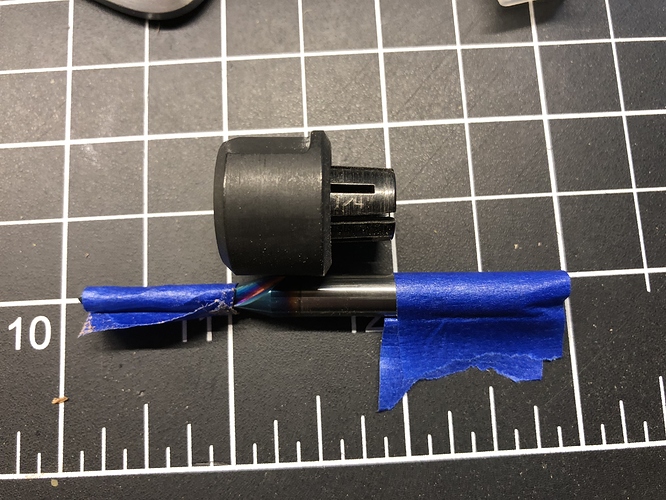 A decent amount was still engaged with the collet, I might back it out slightly so a little more is, at the cost of a little more stick out, but I think it will be fine.

So in summary, .1” seems good to me, going to stick to 50ipm@18000rpm as my baseline and perhaps increase from there proportionally but I got high quality cut results at much higher feeds especially for pocketing where I think I’ll save a lot of time.

I don’t see much effect ramping into contours but I do like it for pockets.

Alright, that’s a decent improvement to start with. Knocked 10 minutes off the cycle time.

I hadn’t set the final pass to be a single full-depth slow pass. Doing that dropped it down further. The geometry window is for a shank the same diameter as the cutter. Your shank is twice the maximum diameter of the cutter and hence more than 16 times stiffer than it.

Good point, alright I’ll back it out a bit so the shank is better engaged in the collet and use my existing numbers for the rest.

Edit: The geometry window DOES allow you to enter enough detail that it could account for that. It has the shank and cutter diameter, stickout and flute length.

Please don’t use anything less than full shank engagement in the collet - its not safe for your workpiece, the router/collet, or you!

Cool, I didn’t realize that. Does it work?

Optimizing my toolpaths to see how much time I can shave off. My previous toolpaths had a few steps meant to minimize the ‘fuzzies’ left by the upcut bit which are on longer needed. The downcut bit seems to be leaving perfect surfaces for me which is going to save a boatload of time.

Got it from ~35 minutes to ~20 minutes in the estimate window. Going to time it in a practical test now. If that goes well I may try upping the rpms a bit, getting a 15 minute cut time would be great since I cut in batches of 4 and would get a predictable hour time per job.

It does appear to work. You might want to try your original parameters with the bit correctly modeled.

OOPs - a closer look suggests that it (compensating for shank diameter in the bit deflection calculation) doesn’t work. I’ll send BW email about it.

I did have it modeled before.

Alright so, test cut was a mixed bag of results. The cycle time was amazing: 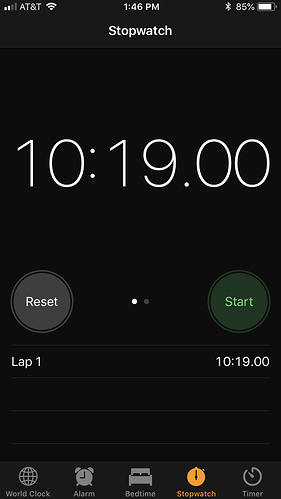 I knew Cut2D would be off but it was half what they estimated which is great, I can do some things like decrease stepover in one or two places without killing my time.

Below is my original upcut on the left vs the downcut on the right, right away much cleaner but obviously chip clearance in the narrower areas is a challenge. The inside of the 3rd hex in that picture is a pocket, albeit a narrow one, but still had quite a bit of residuals in it. 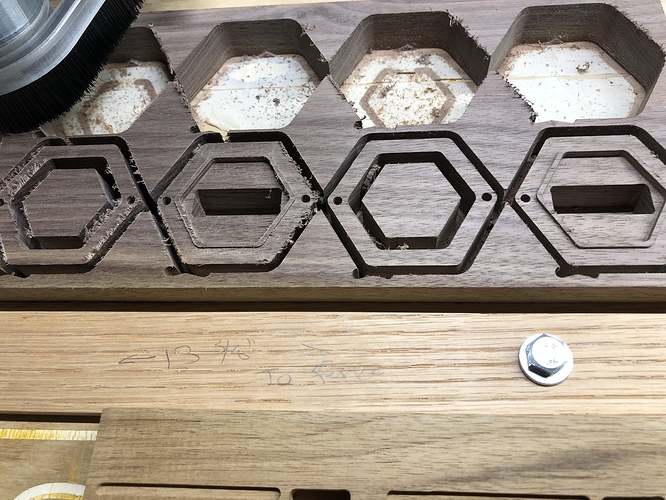 So now the bigger problem, the bottom face. Despite resting on a support, I guess the little gap left by the tape is enough for chips to break instead of cut. I have several little bits missing from the bottom surface, and some of the corners are a bit rough, not sure why but I didn’t see that previously. Unlike the fuzzies I get with an upcut bit these seem irreparable. 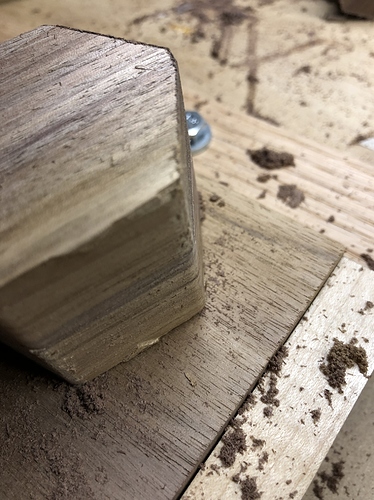 I’m also taking the plethora of sawdust to mean again chip clearance is poor and I’m re-cutting a lot of chips.

Interestingly even though my compression bit is 80% downcut with only the 1/4" tip being upcut, I didn’t have these issues with it.

So I’m left with the decision I had before. I have a compression bit which seems to cut well but using Amana’s recommendations it’s too slow to use. That said I believe Amana’s recommendations assume you have a large axial engagement, since you need 2*Diameter just to get to the downcutting so I’m assuming they figure 3-4x diameter.

In my case I’m fine making the actual cuts using the upcut portion and only care about the downcut towards the end of the cut when I do finishing passes to remove the leftover allowance.

So with that in mind I think I’m going to increase the RPMs a bit just to give me a buffer and run the compression bit with similar settings I used here. The other option of course is to rough with an 1/8" and then cleanup with the compression bit but trying to keep it simple.

Heck yeah, maintained an 11 minute cut time even adding in the few cleanup passes. So this is with the compression bit running at 50ipm just like the other. 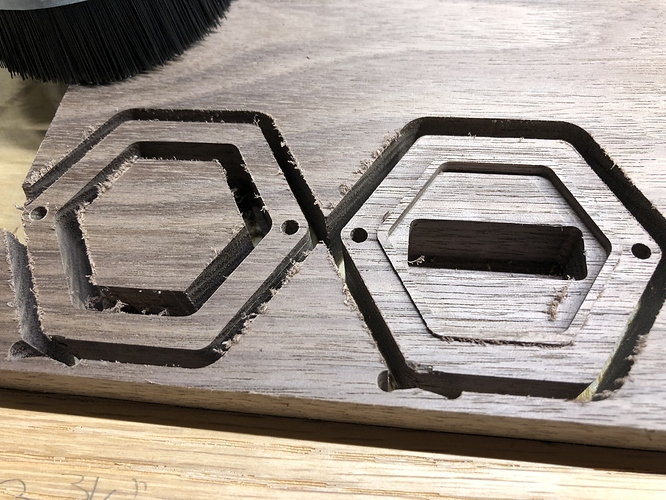 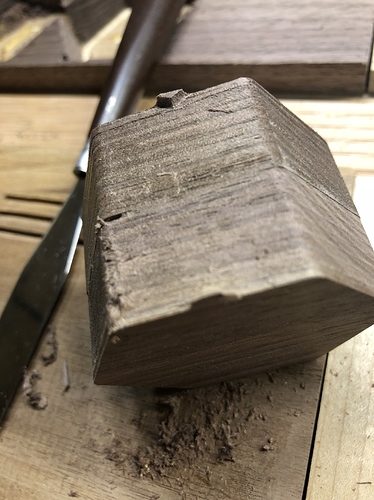 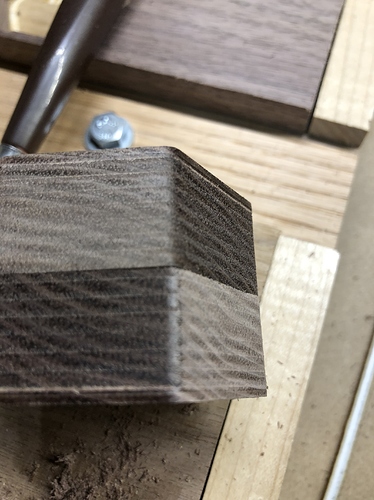 Are scoring passes on wood a thing? Sometimes in non-cnc woodworking if you have a delicate top surface you make a super light cut, just enough to score the surface and prevent it from breaking later. I’m going to add a 5thou scoring pass on the perimeter near the start of the job. The other option would be to do a 3x-diameter cut, enough to engage the downcutting portion of the mill as my first pass doing the perimeter but I’d need to take that super slow and if the scoring pass works that may work better, we’ll see.

I’m going to switch the roughing pass on the cut out to climbing, I had better results with that before. I’ll be honest with a slot cut I’m not even clear if that makes a difference as half the bit is always engaged in the direction of movement.

I’m going to up my RPMs half a ‘setting’ on the dewalt in case taking smaller chips helps with those rough edges.

I’m currently taking .01" as the finishing pass, this feels like it should be enough to get me a smooth finish but it hasn’t been and I don’t know why, it was with my upcut bits, I’m not sure it’s the bit it may be a consequence of something else I’ve changed. I’m making it .015" to see if that helps, I did notice I couldn’t hear it cutting the finishing pass, but then I also had a shopvac and ear protection.

OOPs - a closer look suggests that it (compensating for shank diameter in the bit deflection calculation) doesn’t work. I’ll send BW email about it.

I’m stepping away for a bit from this. I’m getting issues I literally never had before such as tab breaking loose and the aforementioned finishing pass not seeming to make a difference. I may throw an upcut bit in there to get a comparison to see how much progress I’m actually making. The F&S should work fine for that bit.

Edit: I’m feeling like chip clearance may just be my enemy here. So I either need to deal with the issues the upcut bit produces, which are fairly minor tbh, setup my cuts as pockets so try and evacuate more chips, or do a bit change letting an upcut clear most of it. I’m inclined at the moment to do the first option, going to run the job again with an upcut to see if the current issues go away. I nonetheless got much better cycle times than I ever had before and given it’s the same diameter bit I can keep those in place.

BW’s response to my email “When bits have tapered shanks (common for small diameters), we ask you to measure the stickout from the tool tip to the top of the taper rather than to where the shank goes into the tool holder. This will give the same results as the larger diameter of the shank swamps the deflection calculation and need not be considered.”

Interesting and good to know!

BW fixed this with v4.40. But G-Wizard still only uses one value of material hardness for all “alloys” in each material family for its calculations. And it still doesn’t show what hardness it’s using for those calculations.