Just tried to put a really thick piece of stock into my Nomad for the first time, and got a bit of a shock. I was using a block of machinable wax I’d picked up cheap, that measures 90x90mm in X and Y, and 60mm in Z. Got it taped down nice and flat to my wasteboard, got it under my cutter with a few mm to spare… and hit the Z screw where it protrudes out of the bottom of the X carriage. So, I can’t reach most of my stock with the cutter, given the relative XY positions of the screw and the cutter.
I measured it, and my Z screw sticks out the bottom of the X carriage by about 7mm. I’m assuming this must be normal, or not too far from it, since so far I’ve never had an issue with my Z axis.
It did catch me by surprise, however – I’d been blithely assuming that the 3in Z travel spec meant that I could cut material up to 75mm thick, but it looks like 55mm is the limit, going by the overlap I’m seeing. I could probably squeeze out a couple more mm by milling down the wasteboard to just above the bolt heads…
Hm! This gives me an idea. This wax is thicker than I need – I’ll bet I could get around this by putting the zero at the back end of the stock, and running a simple flat milling pattern to mill down the top of the wax ahead of the Z screw. Now, how to make this work the way I’m imagining it…?

For the machineable wax blocks, I tape them directly to the aluminum deck (after cleaning both with some alcohol) so you gain a little bit of height by getting rid of the MDF spoilboard… of course this is only if you are not machining all the way through the wax.

@SkyeFire, that does not sound right. Here is what my Nomad Z screw looks like bottom and top end

And the below photo on the Carbide3D website also doesn’t seem to show the Z screw extending below the carriage. Looking at the various photos on the website, the Z axis (along with the rest of the mechanism) has gone through a lot of development, but I cannot imagine the Carbide team doing something as blatant as that. That is just giving away clearance. Your situtation is probably worth an email to Carbide to ask about. 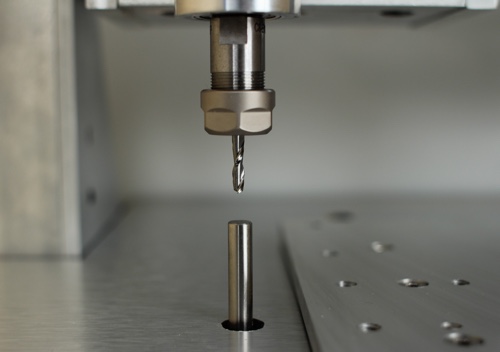 @Randy: wow, that is different from mine. Now I wonder if my shaft coupler might be creeping loose. You’re right, definitely time to email support.

@Randy Well, I may have a bigger problem than I thought. I was only measuring with a tape, but I just had the Nomad jam up halfway through a 5-hr cut. And when I re-measured how far the Z screw was protruding from the bottom of the X carriage, I’m now measuring around 11mm. I already got my mail off to Support, but I think I’d better stop using the Nomad now until I get a reply…

Yes, I agree. It certainly sounds as if the screw is slipping (pretty severely) relative to the motor shaft. At this point you’ll just be wasting stock, and if the screw slips all the way off the shaft/coupling (I don’t know what the construction details are) you could be in the situation where the tool gouges down into the machine itself.

“Sir, please put the mouse down and back slowly away from the machine…”

But! But! But! I’m already getting the DTs (or whatever the term for Maker Withdrawal is).

Well, Jorge got right back to me, and had a new Z-axis motor&screw (the screw is apparently integral to the motor) shipped out to me before the end of the day.

So, soon, I get to embark on a Nomad Repair Odyssey unprecedented in history. Or, at least, in the forum postings to date, far as I’ve been able to find.

The good news is, this really doesn’t look like it’ll be that involved. I’ve pulled the “roof” and back panel off my Nomad, in preparation (and re-learning some disassembly lessons I’d forgotten from when I had to fix my fan). Looks like just two mounting screw for the motor. I’ll have to separate the cable bundle, and then use some fresh zip-ties once I put the new motor in. Probably the most aggravating part will be getting the lead screw out of the Z carriage – I’ll probably have to spin the motor/shaft quite a bit to get it to disengage from the “nut” it drives.

Did run into one thing that was worrisome. A fair amount of really fine sawdust appears to have floated (been drawn?) into the electronics bay, including into the power supply.

The four screws that hold the Z-axis motor come up from beneath the plate. They’re the screws showing in my second photo above.

Thank you, Obi-Wan Kenobi! You’re my only hope!

Good point. I’ll definitely want to refrain until I can see the spare part assembly once it arrives. On Friday. With me scheduled to spend all day Saturday at a family reunion. Maybe I can fake a case of the 24hr Tibetan Zombie Flu?

Whew! Sorry it’s taken so long to update, folks, but Real Life just kept taking away all my opportunities to work on this. But I finally got the Z axis swapped out for a new unit. 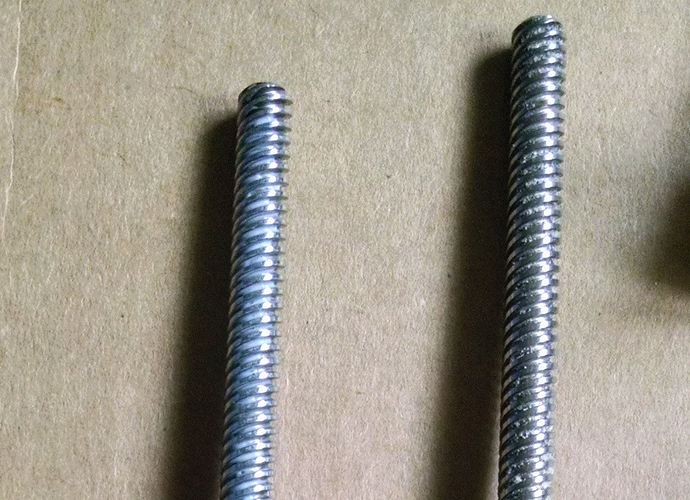 As you can see, the old screw (on the right) had definitely started to come loose from the motor. In fact, I was able to push the screw shaft back into the motor using about 10-15 pounds of force and my bare hands… which probably means that it would just drift loose again over time if I ever put it back into service.
I’ll also note that the new motor has a socket, where the old motor was hard-wired. A definite improvement, I’d say. The motor is also a bit more compact.

The anti-backlash nut assembly is interesting: 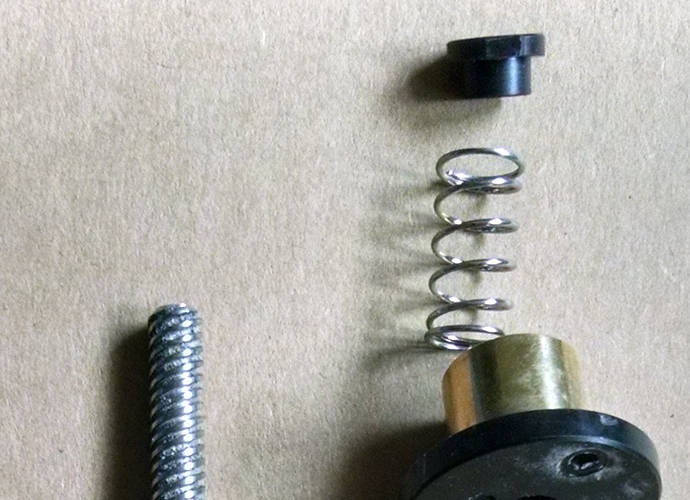 The spring goes inside the brass bushing, and the small black nut actually has two flats on it that mate to flats on the interior of the brass bushing. Both the “disc” end of the bushing and the nut are threaded, which would seem like it’s asking for some cross-threaded situation, but I’m guessing that the nut has enough “float” to avoid that. When properly assembled, the nut seems to fit flush in the face of the brass bushing. The old one came apart as I pulled the lead screw out, but the new one held together on its own so I didn’t have to worry about tolerances. I just spun the anti-backlash assembly off the lead screw, set it in the circular depression machined for it in the bottom of the X carriage, then dropped the new lead screw down through the top of the carriage and spun it (carefully) into the anti-backlash assembly until the motor was just about resting on the top of the X carriage. After that, I started threading in bolts. 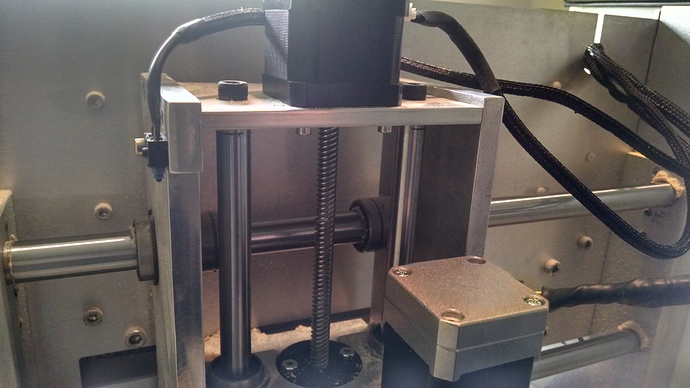 IMG_20150705_155118197_HDR.jpg4320×2432 2.78 MB
I will say, getting those bolts in and out was a NIGHTMARE, at least for someone as ham-fisted and carpal-tunneled as I am. The right-side bolt in the anti-backlash assembly and the two rear motor-mount bolts were the next best thing to inaccessible. Jorge (blessings upon his name), linked me to a low-profile ratchet that they apparently use for this at the C3D shop, and it turned the job from impossible to merely very painful. If you ever have to do this, get the ratchet, and get some 2.5mm ball-end allen wrenches. And some long needle-nose pliers.
The issue with those three (out of the 6) bolts is that, even when you get a tool on them, the motor and/or vertical shafts block your “swing” of the wrench almost completely. I kept getting one “click” out of the ratchet, but then I had to pull it out, rotate it one more click by hand, and then re-insert it. If you can find some sort of flexible-driveshaft thing for your Allen keys, USE IT. You’ll be glad you did.

Still, not nearly as nasty a repair job as some cars or household appliances I’ve worked on. Just be forewarned of what you’re getting into with these screws.

I still have to finish re-routing the cables and buttoning the whole unit back up, but I did fire up the Nomad and successfully zero’d all the axes (the collet nut can reach the tool sensor – I did not know that). So, I think I’m pretty much in the clear (fingers crossed).

Both the “disc” end of the bushing and the nut are threaded, which would seem like it’s asking for some cross-threaded situation, but I’m guessing that the nut has enough “float” to avoid that.

This is one type of anti-backlash nut. The drill in re-assembling is to thread the large (fixed) part just barely onto the leadscrew, then compress the spring as much as possible while threading the screw up into the small (floating) part. The small part finds its own position while doing this (as you discovered

) The spring force pushes the two nut parts apart which takes up any axial play with the screw threads, for vertical cutting forces up to the spring force.