I just installed the new version of the Shapeoko 3 slider from CNC4newbie. Can’t wait to do a test cut tomorrow. 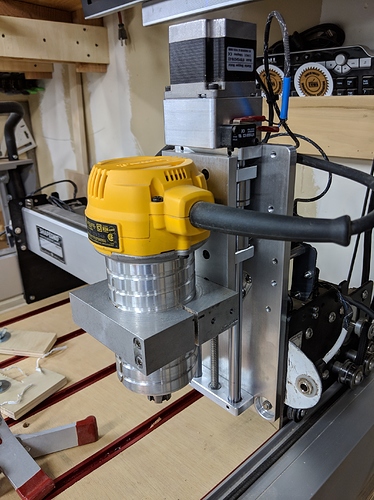 I hope this helps some one else.

And? What do you think?

hahahaha. So, I like the z-axis upgrade a lot but it wasn’t smooth. The new system is awesome and is totally solid; which I never felt the old z-axis was.

Here’s the problem. When I first received the new z-axis, two of the threaded bushings on the assembly were broken. After a message to CNC4NEWBIE, they sent a new bushing set immediately, a four day delay. After I got the bushings I finally got the new Z-axis assembly installed, that’s the picture you see above, then the X-axis stepper motor started shorting out. Unrelated to the z-axis upgrade but happened at the same time anyway. My Shapaoko 3 is an OG. I was part of the pre-orders, before they actually started shipping in 2015, so I figured the warranty was over and I was screwed. I contacted Carbide3D for a quote on a new motor and they sent me a new X-axis motor right away, free of charge. Still took a week, but I was back up and running. First cuts after the upgrade… AWESOME!. The whole system is rock solid. Before, I could see deflection in the z-axis during cuts, now there’s no deflection at all; it’s a beautiful thing. I machined a small, 3d, project before and after the z-axis upgrade, closely watching the z-axis during each job. The difference was very noticeable. Before the upgrade, you could clearly see the Z-axis flex during the cuts. After the upgrade, there’s no deflection at all. I couldn’t be happier.

Hope this has been useful.