Z plus and Spindle

I read the info on the Carbide 3d accessories page, saying about Z plus: “the Shapeoko Z-Plus is our new upgrade for the Shapeoko. It’s got all the rigidity of the Shapeoko HDZ at a much lower price”. I interpreted that as saying that the Z Plus was sufficiently rigid that I could replace my noisy Makita router with a three phase spindle. So I did. VFD spindles are quite, low run out, and have a hight duty cycle in comparison with brushed routers. 0-24000 RPM / Start / Stop controlled via keypad or CNC controller.

It was more expensive than importing , but was impressed by the information on the web page and also happy that there would be technical backup if necessary. As it happened, I didn’t need much help but Ben was very helpful with the help I did need.
However at some point I started to wonder if my spindle (1.5 Kw, 2.9 Kg) might be too heavy for the lead screw. Indeed, when I emailed a question about this to Carbide 3d I got this reply:
“We do not recommend using a spindle with the Z-Plus — if you do, it should fit in the 65mm spindle mount adapter ring and be of a weight not much more than that of a trim router. If you wish to use a spindle we recommend the HDZ and a suitable HD spindle mount”. Hmmm. A Makita trim router weighs about 1.8 Kg (3.9 pounds) and my spindle weighs 2.9 Kg (6.2 pounds). Hmm again.
Now the reason I bought the Z Plus was cost. Here in Australia with shipping and the exchange rate the Z Plus is $375 Aus, compared to $636 Aus for the HDZ. Not quite double, but nearly.
What I’ve opted to do is reuse the springs from my belt driven Z axis and use them to lessen the downward force on the lead screw. So it’s an angle bracket attached to mounting holes for the stepper motor. It’s not too scientific but so far it seems ok. I thought of gas struts, or gas traction springs would be a good alternative, as they appear to have a linear resistance over their length as compared to a spring, but it seems to require a bit more engineering knowledge than I have. Any comments gratefully received. 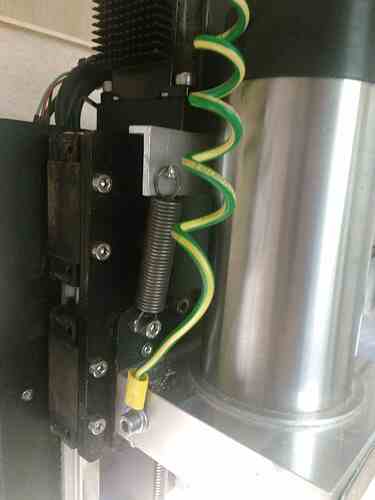 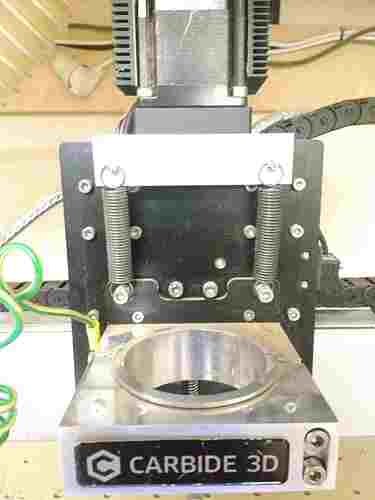