I work with a robotics team and we got a new ShapeOKO XL last year. We had a problem during build season that the parts would be off by some small amount. I, of course, blamed the kids for not following the steps that I had shown them. But when I investigated I found that sometimes the Y axis would be off by exactly 1mm.

The test procedure was use the touch probe to find the corner. Then move the tool half width inward and see if the edge of the tool lined up with the edge of the material. I measured the offset a few times and it was always either right on or 1 mm off. I am having them move the tool low enough that the spiral flutes have to hit on on the side.

So I just always had them test it and adjust the home position by exactly 1mm when it seemed off.

The other mentor did not think we were getting good parts even after this and in general so I need to go back and make sure the machine is square.

I hoped it was something that would get addressed in a software update over the summer but there does not seem to be any newer software.

Any ideas if I am missing something obvious or what tests I should run?

Can you try probing with an endmill blank…take the flutes out of the equation.
https://www.amazon.com/gp/product/B07BP2MQW3/ref=ppx_yo_dt_b_search_asin_title?ie=UTF8&psc=1

I would think that if it were the flutes I would have a random error of less than 1mm. We also have this issue even if we drop the bit low enough that the twist of the flute ensures that the flute touches.
Does the end mill blank have other advantages? I also worry that the kids will knock it off a step while changing back to the real bit.

Ok I will try one of these blanks and see what that gets us.
Thanks.

I’ll send you one. PM me your address.

Please contact support@carbide3d.com and send us a photo of the underside of your probe and measurements of it and we’ll make this right.

Strange, mine is always off a small amount on x axis. I haven’t measured but it seems like it was around a 16th, which was noticeable to the eye. I don’t know if it is off on Y as well as once I discovered the X error, I only use it for z on any critical piece where I need things to be exact. I thought when things slow down for me this winter I will measure the error and then just build that into my projects going forward.

I will be at the school this Saturday. So I will try and get a picture then. I may be able to have one of the team members get it sooner.

The 1 mm error is inconsistant. As in sometimes it’s right on and sometimes it is off by 1mm I have not caught it being off by some other amount. Although I can’t be sure that does not happen.

earlier posts indicated a 0.7mm error by several folks… that seems pretty much similar to what you report

This is what the bottom of our touch probe looks like.
I am not sure what to measure.

Is that the C3D probe? 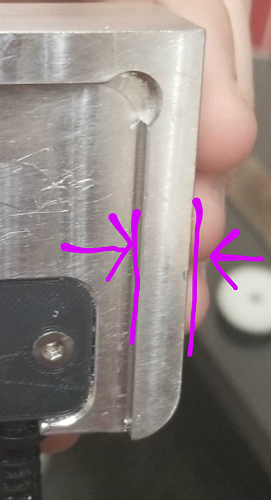