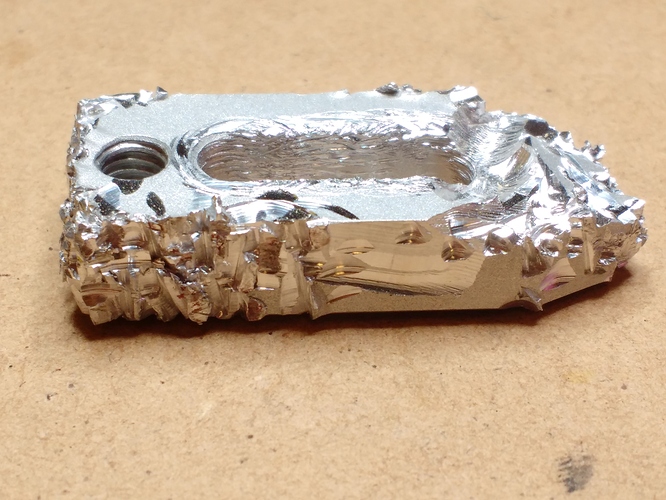 Wow that is nasty looking. Did your router survive?

Looks like the bit was chewing and spinning the clamp around the screw holding it to the wasteboard. Wish I could see that on video!

There were no winners. The Makita router is making a strange noise so I bought a new one. I’ve ordered a new armature, hoping I can rescue it.


It was a 22mm facing bit. I loaded a new file, and the router moved directly, almost intentionally, over the clamp and down…
It did spin a lot while I watched, frozen.
There was a lot of noise.
(There is another gouge on that clamp from an earlier error.)
1 Like
TheSilentEngineer (Mr.C) April 19, 2020, 3:32am #5

That’s a rough one! Personally I’m a fan of rapiding into clamps with small tools, and snapping them off.
What dose the remaining tool look like?

Personally I’m a fan of rapiding into clamps with small tools, and snapping them off.

One thing I like about the HDZ is that it seems to rise up almost all the way to the top of its travel before it moves at the beginning. I have no experience with the Z-Plus but I know the standard Z did not go high. Every set up needs different clamping but I really like my cam camps made ut of 3/4 inch oak. The cam clamps make a very low profile and keeps me from hitting them. I dont do any metal but if I do I think a combination of the painters tape and super blue along with the cam clamps hopefully will work.

I have a Dewalt router and they sell from $100-140.00. I would think that the Makita is similar in price so how much was your new armature/spindle cost for the Makita? At the price of the Dewalt I consider it a consumable if it were to die, although I do have a set of spare brushes and would fix it for that alone. If my Dewalt died I wouold most likely replace with a Makita due to its speed range is better than the Dewalt.

Superficially the tool looks ok. There is some gouging on the shaft where it has stopped turning while the collet continued rotating. However, I have no confidence that the shaft is still straight.
Makita routers cost $230 here in Australia, so an armature costing $50 delivered is worth a try.

I did a quick search for the Makita Router that is used on the Shapeoko and found them around $99.00 US. I would have thought they were more expensive than a Dewalt. I did a quick search for the exchange rate between the US Dollar and Australian Dollar which was 1.57 Aussie to 1 US Dollar. I know that Australia is 220vac vs 110vac in the US but I still would have thought that a 220vac version would be cheaper than the 110vac because 220 is used almost every where outside of the US.

At the 250.00 Australian Dollar price tag I see why you ordered the armature. Good luck with the repair.

That pic tho…it looks like art to me!
We should have a hall of fame for this.

Where is your “oh shit” Emergency Switch?

And the second nomination for the hall of fame…

Dearly beloved, We are gathered here today to celebrate the life of #201. He was in so many ways a deer fried, loved by his wife Dewalt 611, and father to #202 and #203Z though he is gone it is important to remember his contribution to this world. He has given Birth to a Cow, flames, plaques puzzle box’s, i remember once when he and i tried our hand at deep earth drilling, as i write this i remember the look on our faces when the z gantry crumpled under the pressure and v wheels disintegrated,…

We’ve all been there! It’s like there is a “yet to be discovered” force attracting bits and clamps.

I had just opened up a brand new rather expensive threading tool - and during the very first movement over to the work area it wacked into a clamp and snapped in two.

I’ve learned to make my clamps out of wood - and keep everything really low profile.

Please Carbide 3D will no one think of the families of clamps like this!! A clamp is for life not just to be abused! If you have been affected by this image please ring help at #clampawsreness and #clampsagainstdrillabuse

Don’t forget your donation to the “#americansilverizedclampsociety” and feel good about it.

On its face, it is unfortunate that that happened, though I think that beautiful pic lessens the sting a little. At least it would in my world…