After nearly a year of owning my XXL and many hours of musing over how to get it setup right I think I’ve finally reached a place where my machine is working mostly the way I’d hoped.

So last night I was playing around with VCarve and loaded up an image I’d found on the web a few weeks ago. I tweaked some work things to split it into 3 panels and set it up to cut.
Material: 24"x24"X3/16" lauan plywood
Cutter: 1/8" two flute downcut router bit
Speeds/feeds: 96.6 ipm feed, 48.3 ipm plunge, router speed with SuperPID 28659 rpms(roughly), 0.0625 depth of cut.
Finish: I’m going to let my wife finish it out, she’s better at these sorts of things. 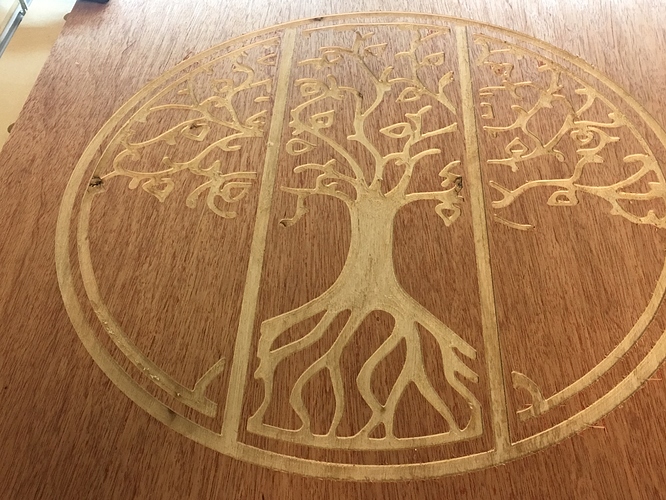 Tree of Life 18" diameter. Maybe if I’m lucky my wife will find somewhere to hang it up alongside some of her paintings, or she may throw it away since we have 7 kids collectively and don’t need any more help in the way of making life, haha!!!

I love that design, and at 18" that looks like a good circle, too!

Hey Dan, funny… not much musing about after the musing, so I figured I’d muse for the sake of your musing. You Tree of Life made me remember that I want to include some of my deck furniture when I get my store up and running. I’ll sit in the chair I made under my shade tree out back and think about muse’acal thoughts. Thanks for sharing your efforts. Jude

Thanks! I’ve cut quite a few different trees, but this was the first one this big. I saw one that was made into 3 panels, so I decided to try one myself. Wife hasn’t done anything with it, but I’ve cut it out on my scroll saw and knocked some of the “loose stuff” off with some sandpaper and a wire brush. Fun finally really cutting stuff!

Jude ya know after awhile if you muse too long, it’s called “overthinking”.

If you think while you’re sleeping it’s called dreaming. Musing has nothing to do with thinking, musing is the expression of thoughts to yourself or anyone else, I have mused too long about one subject even to myself but since it is impossible not to think of something I simply switch my musing to another train of thought or even to just musing about musing (kinda like this); that really is a nice piece of work, your’s not this. Jude

I guess you can’t call it overdreaming, although the way I sleep sometimes I wish I hadn’t dreamt.

Played around last night with a diamond engraving bit and some cheap Home Depot acrylic and here’s the results: 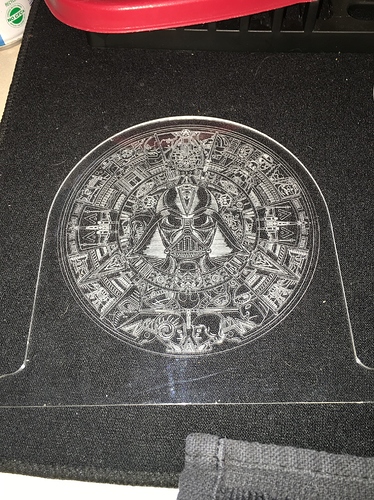 This was artwork I saw here in the forum, can’t remember who, but thanks! I’m a huge Star Wars fan, saw the original in the theater with my dad around 1977, so this piece of artwork really grabbed my attention. It’s amazing when you zoom in on the details, it’s crazy sharp. Engraving took a little less than an hour and the cutout was about 3-4 minutes. The art is about 6" in diameter.

NOW that is NICE! Great job, over dreaming is when you only dream and never create from your dreaming. Dreaming spawns hope and creations spawn confidence. Terrific job creating from your memories. Wonderful story to go with it too, these are the things that encourage me, seeing not just practical projects but projects that bond with special times and fond memories. Thank you Dan, I’m in the middle of a practical project but dreaming of a special project about my Dad and I from way back when. This is progress the right way, thanks again, Jude

Because we’ve discussed this before in another lengthy forum thread, I thought it was about time I did something about it:

Nice, texture is terrific, a moment of silent musing in honor of the moment…Jude

Ok, I kinda got derailed messing with last weeks contest:

Ok, Luke is killing me in the Likes department, so I’m gonna have to pull something out… Edward said accessories, but I don’t know if I actually saw the word “useful” in there anywhere, and I also saw post as many as I like, so here goes: The Pat Splat CNC Enjoyment Boobblehead: Materials: 1 small 6x5" cheap scratched up 0.087" clear acrylic I’ve been kicking around the shop for months. about 8" of 0.040" safety wire, twisted with a loop on one end (tried using a pen spring but it wasn’t st…

After I did that final little project I started playing around and seeing just what I could do within the Carbide Create workspace with acrylic. I own VCarve Desktop, and like it a lot, but I wanted to see if I could pull off some acrylic drag engraving within Carbide Create, turns out I can: 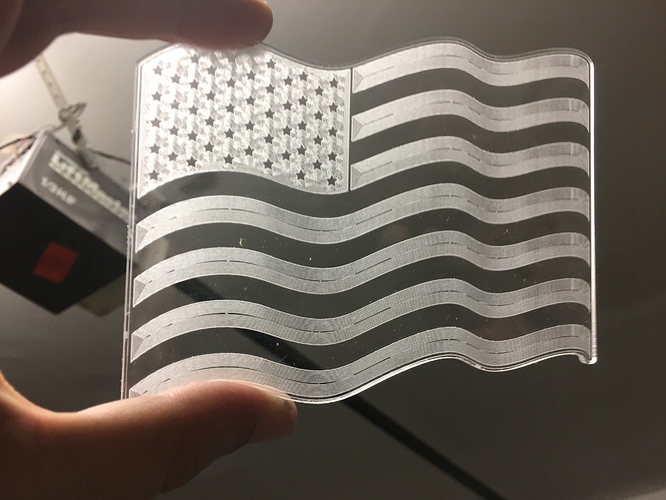 And drew out a US flag completely within Carbide Create, no SVG import from another program.

WARNING: Loading and setting up tool paths made my slowish PC nearly crash to the point that when I’d define a toolpath I would leave the room while it proclaimed itself “Not responding”, but in the end it did actually finish whatever “thinking” it was doing. Maybe @WillAdams has some ideas on why this file is so hard to load/edit etc.? For the cutout I used a 1/16" 2 flute square endmill at 54ipm, 24 plunge, 0.010" DOC and 23,000 on the Dewalt (a little less RPM may be better, but I haven’t tried it). Maybe someone else can try loading this file and see if they have the same slowish behavior? Carbide Create 307

Here’s the settings I’m using with the drag engraver: 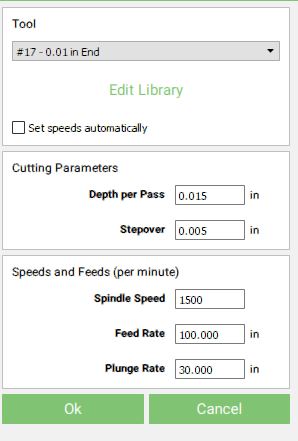 Suspect there’s more toolpath there due to the small diameter than CC was really intended to handle @robgrz and @edwardrford — can we get some engineering examination, optimization and feedback on that here?

Thanks Will, that’s what I suspect as well.

Also anyone trying this please note the RPMs I have set for the drag engraver are FALSE, a drag engraver does not run with the spindle on, it drags. Just thought I should clarify that before someone tries to spin a drag engraver, or tries to use my settings with a standard V-bit…I could honestly see myself doing this, I’m not trying to say anyone else would miss this point.