Autodesk Fusion 360 changing hobbyist licensing --- what other tools should be considered?

Disappointing, but not surprising: N.B. If you’re currently using Fusion 360 for personal use and need to export your designs out as any of the formats mentioned above, you have until October 1st, 2020 to do so. The 10 active document allowance will be in effect on January 19, 2021. After this date, you will have the option to select which 10 documents you would like to remain active, and the rest will be stored in your account in an archived state. You can swap an archived document for an …

For folks for whom it is sufficient to make you consider a different CAD application which are you looking at and why and what sort of work do you do?

Things which may merit consideration:

For opensource there are the standard options:

I think this thread is a bit premature. The changes to Fusion 360 licensing don’t appear very relevant to us, the CAD features haven’t changed at all for example. It’s a shame multi-axis CAM is going away but the number of people here who are likely to use that on a Nomad or Shapeoko can probably be counted on one hand.

And rather than CAD alternatives, I think CAM and simulation alternatives are more relevant since that’s where the largest relevant licensing changes have occurred.

That said, I know that SolidWorks is very popular among those who sail the seven seas.

There’s also CNCCookbook’s survey of CAD packages. A lot of those are missing from your list.

I tried it out and it’s cool that it works with the Apple Pencil but I found it quite limited in terms of features.

Yeah, it’ll be interesting to see how this plays out — I’m especially curious about how next year’s CAD/CAM surveys will turn out.

Tried to mention the software which folks using our software use for similar things as Fusion 360 — most of the folks using commercial software for signs who are not using Carbide Create are using Vectric or CarveCo, which don’t exactly hoe the same row.

For CAM options there are:

I don’t use it but what about Sketchup (CAD only of course)? I use Carveco, it hits all the right notes for the simple stuff I intend to do/ am doing.

Sketchup is great for editing STL files. It also has its place in my arsenal of tools for designing construction and other wood projects. I use it often in conjunction with Meshmixer to fix 3D models for printing and it will work just as well with a CAM tool for use on the Shapeoko.

Thought I’d mention here another possible option here. Apologies if it already came up, I scanned the thread. The experimental aircraft association annual membership is $40. You get access to a free student edition of solidworks that has options for all the add ons (mold making, electrical, cam). This is what I’ve used for a a few years until I started playing with Fusion. I’m not sure if it’s just training/muscle memory but I always found Solidworks to be a MUCH better sketch/design workflow than Fusion. It’s the reason I also found Onshape to be a good fit to design in (onshape was founded by Solidworks founder). It’s been a while since I’ve used either, life got in the way of my hobbies last few years, but I think Solidworks now has a built in CAM module that is also available as an install option in the educational version.

I invested a lot of time in Onshape years ago only to be burned with the change in free terms. PTC now owns Onshape so I can see the free tier disappearing down the road. Seems like affordable (not free) is probably the best anyone can hope for in a mature easy to use CAD package. It sucks I have so much training in Solidworks but I don’t like the parent company (Dassault). I’lll never be able to justify the cost of a full seat either.

(I moved your topic here)

For Solidworks there are some other options:

Wow $40/year for full-fledged SolidWorks seems like a no-brainer to me!! I live in SolidWorks at work haha, so if this works in the long run it would be wonderful. This Fusion fiasco has me wondering if everything is too good to be true…
Looks like the student premium version mentioned comes with plenty of good stuff (I’d like to assume 3d adaptive is included in the CAM…): 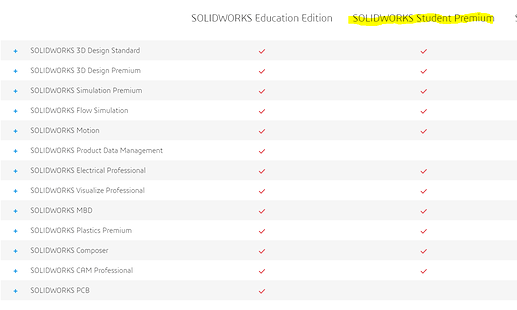 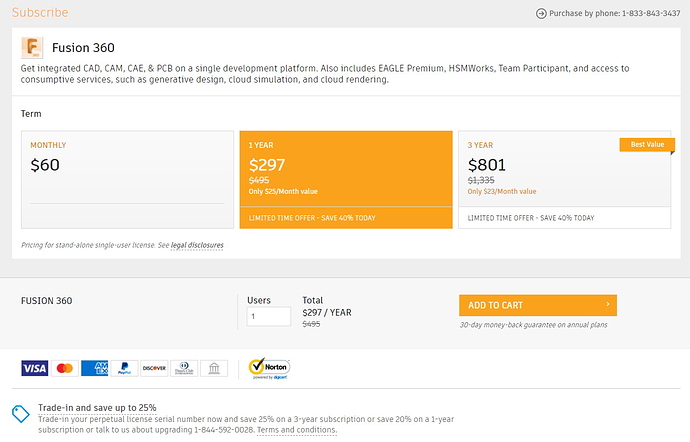 No sure what your point was here? The $25/mo deal has been talked about a lot.

Not sure if anyone is familiar with Solid Edge.

They have a community version which I haven’t tried to gain access to. I’ve kicked the tires in the past but never really used it extensively as I was to lazy to switch from Solidworks. I’ve read it’s really good, Siemens actually licenses the parasolid kernel to Solidworks and Onshape etc. to base their cad packages on. It has their synchronous technology that used to only be available in their high end package NX.

Alibre has put their entrant into the ring:

Too bad no Macintosh support.

Folks who want Mac support could just use MeshCAM and a 3D CAD tool on Mac OS X (or the CAM which is available from the Cenon folks? Not sure on pricing for that though)

Another tool which was recommended in this context is:

the licensing is rather restrictive, but it may be workable for some folks.

For those that have a new Mac with Apple’s own chip (M1) Shapr3d is porting their iPad app to the Mac.

For completeness sake, ESTLcam is pretty cheap ($60) and has interesting features