I’m about 8 hours in to a large aluminum cut out. Before I started I switched out to the Z-Plus and checked the X & Y belts to make sure they were pretty tight.

Now, I notice that some of my resurfacing of areas I pocketed out to .375 are not matching the previous cuts. I checked and the X belt was loose. I tightened and that only made it more off. If I was to guess the X belt has stretched. With this thought I changed to one if the new belts from my maintenance kit I just bought. These appear to be different, maybe new kevlar belts. Now the results are shorter in X than when I noticed the issue. Guessing old belt is too long, new belt is shorter than what I started project with… now what?? Besides upgrading to screw drive cnc… 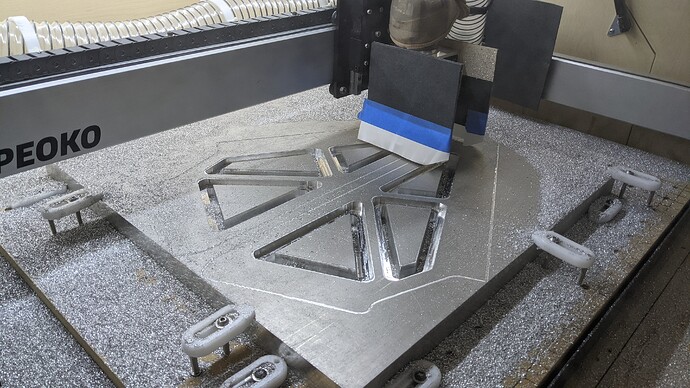 Sounds like your old belt had hit EoL and one or more of the reinforcing fibres were failing.

First thing would be to do the X and Y belt calibration (obligatory e-book link here https://shapeokoenthusiasts.gitbook.io/shapeoko-cnc-a-to-z/x-y-z-calibration ) and make sure your new belts are calibrated to the correct steps / mm.

I’d suggest that you actually measure the belt tensions so you can track them properly, and balance the two Y belts properly if you’re concerned with precision

A post about belt tension, how to measure it, what effect it has and why you need to manage belt tension in order to usefully calibrate and square the machine. As usual, no criticism of the machine here, in fact some quite clever design choices seem to have been made. The question of drive belt tension has been bugging me. How much you should have, how to check it and how it affects machine performance. I failed to find any quantitative data to use, so I went and started measuring; and found t…

I will say that my measurements say that the belt system can deliver really quite surprising precision. I can get within 0.1mm when I really try. The belts do limit the speed of cutting but are way better than leadscrews in achievable precision if you rough then finish so, no you don’t need to replace the controller, motors, belts with ballscrews and rails just to get accurate cuts.

I see, Thanks.
One last thing. I noticed the new belts are much more flexible/softer than what previous came on the S3. It appears I originally had steel reinforced belts and now maybe Kevlar? With the new belt I had a much harder time getting the belt clips to hold it with the teeth locked. Any trick to keep these locked at the clips?

The steel core belts were discontinued when they were found to have a predilection for premature failures, presumably due to the tight bend radius, and we have since reverted to the fiberglass — locking them at the clips should be much the same as for the steel belts, just ensure that the teeth mesh.

the belt system can deliver really quite surprising precision.

One of the things I admire on this design.
The shapeoko is no beast or fast machine, but applied properly it can be pretty accurate.

Were these in the maintenance kit I got last year? I’d love to pay for a trade since all those belts have failed on me and I need to get some replacements anyways.

Let us know about any belt issues you’ve had at support@carbide3d.com and we’ll do our best to get this sorted out.