Best add on by far

@Mogsy Now…at least in the newest versions of Motion, between it’s first trip to the bitsetter and start, it prompts me to remember to measure the bit…it’s a new feature requested by someone who has difficulty remembering things. Luckily, I don’t have that problem…so, I’m OK with it coming up once, but then I want to get rid of it forever…so that I don’t have to click an extra time each time I start the job because of it. I thought the option to disable the prompt was built into the solution…but I cannot find it.

What version is it my version is, I don’t see a print asking me to measure the bit ?

548 is the latest version, I believe. I think the one in my shop is running one level back from that.

I was looking through the release notes and I don’t see mention of the new prompt - so I can’t tell you when it was introduced…maybe @WillAdams knows.

@WillAdams Here is the message I’m seeing. There does not seem to be a place to say, “Do not show this again”… 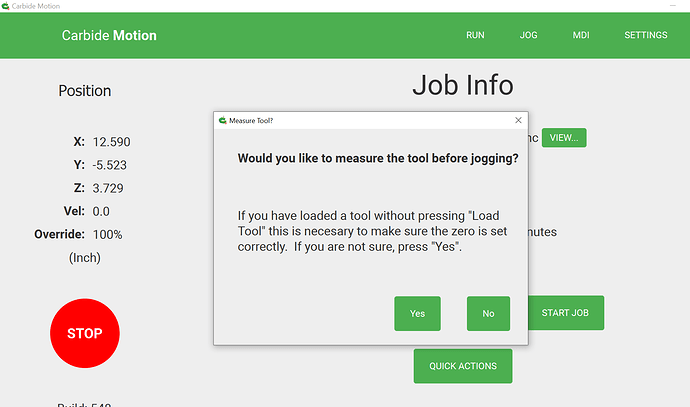 Never seen that pop up for sure

It was added in the most recent version — @robgrz would need to speak to it beyond that.

@robgrz If we could have a checkbox on the dialog that says, “Do not show this message again”, it would be great.

Thanks and Happy Holidays!

I have to agree. That message is a pain you know where. I am ready to go back to an older version of Carbide Motion. Have to agree on the bit setter. Best add on ever.
Norm

@scorp589 The new version has some nice stuff in it. It would be a shame to go backwards.

We’re not quite ready for that. We had to add the window because of the number of people crashing their machines because they weren’t following the BitSetter workflow properly.

There’s no real way to explain in more detail without some users feeling like we’re blaming them. Please take my word for it that we spent A LOT of time talking to people and working out what was going wrong and this is the best we can come up with to eliminate the trouble.

The problem we have is that almost everyone would click “Ignore in the future” and then we’re back to where we were. We have some thoughts for much deeper changes to the workflow but we’re not quite ready to dive into those changes yet.

Our only consolation is that we’re trying to add enough additional functionality that the extra “No” click will be offset by added features.

The extra clicking does not bother me at all
Like when some program comes on tv that I don’t like, I just click to another channel
We all get complacent after doing the same ole same and that’s when mistakes are made
Our trucks bleep like crazy if we turn them off and leave the keys in…… how many times have we all still locked our keys in the truck…. Be honest now

Personally I would like to see a graphic representation of what you are doing that shows tool paths and progress in real time, I know other programs do this and if CM did it then it would be fantastic
I have used a number of GCode senders and they all have their good-bad points but I use CM cause it’s written for the machine by the machine makers
Just wish it had that graphical representation
Now I do find the estimated time to be way off
This makes me hesitant to start some jobs and I go back to laptop to check my file
When a 3D carve shows “ Under a minute “ I second guess if it has all of the code ??

Does the measure before jogging prompt appear if you don’t have a bitsetter installed?

I am not sure this is the right reasoning.

You’ve bucketed all people in the “People will never understand this” category.

This seems a harsh flip from the previous version where there was an assumption that everybody would understand it. Perhaps you should aim for a middle ground where you acknowledge those who understand what’s happening?

Forcing the bitsetter measurement routine at machine initialization obscures the complexity of the machine’s state.

As I am one of the stupid users who later learned, I can speak authoritatively…

The problem for a lot of noob users is that the machine forces them to run the bitsetter routine when it boots up. And then all CC jobs also force the routine at start.

I understand why (now) but users see all this measuring happen, and they are inconvenienced by the time it takes, and so they feel justified to think “OK, after all that, if I just do my part, I put in my tool and set the zero, everything has GOT to be all set up and ready”

Considering this it’s as if the only time the bitsetter routine should run is: 1) Intentional explicit tool changes such as mid-job programmed tool changes or 2) clicking the “set Z zero” button.

Running at initialization does nothing for the user except trick people who don’t know what’s going on (read: me 6 months ago) into thinking the machine knows best and everything is ready.

Now it feels like CM design is trying to discipline the users in place of empathy for how the Z-crash mistakes happen. To the point that we are training them to constantly anticipate and rapidly dismiss an error message without reading it or reading the buttons… which… yikes

It may take half a day to work out the kinks in adapting my particular workflows to UGS, but it sounds like that’s the most “correct” path in a number of ways for anyone graduating from the “People will never understand this” category in @Gerry 's outline above.

This seems to be a real workflow / usability issue.

I have a bitsetter, sitting on my desk in the house, never been plugged into the machine. Every time I think “I should plug my bitsetter in” I then remember all the problem threads and think “I’ll do it another day”. The time it costs me to slap the bitzero on the spoilboard zero spot and probe Z for the new cutter vs. the apparent grief in letting the bitsetter do it…

In my case I’m running jobs which are one tool at a time from Fusion 360 anyway so it just doesn’t seem to be a good trade up.

Here’s hoping that a sensible workflow can be arrived at that doesn’t involve 10 more dialog boxes that I have to click through each time I run a job.

If you’re doing files which only have a single tool then no, a BitSetter is not a good fit — if I’m doing more than one file which has a single tool I’ll disable mine.