The ODrive works with Hall Sensors just fine. It is however using FOC.

Honestly if you could find a ESC that properly supports this motor (voltage, kV rating, current handling, etc) and just used a simple Arduino to PID control the speed it would work great. The problem I ran into was finding such an ESC. Everything out capable of handling the kV rating could not handle the voltage. Everything that could handle the voltage could not handle the kV. That is why I went with the VESC and now the ODrive.

The ODrive works with Hall Sensors just fine. It is however using FOC.

FOC can’t be disabled to just use simple Hall sensor commutation, as is likely done in the router OEM controllers?

Ran some back to back Modkita (VESC) with a 1.5kw 110v in 6061 on the upgraded Nomad. Hands down the Modkita wins with MRR, you just can’t beat the rpm and associated machine forces. Oh… forgot to record the log file but cut was up in the high 200 watts.

Also out of left field. What would you guys think about adding a small flywheel? Something to just smooth everything out and damped things out a bit. Maybe a viscous dampener…

Also out of left field. What would you guys think about adding a small flywheel? Something to just smooth everything out and damped things out a bit. Maybe a viscous dampener…

And then, maybe a clutch, and some cylinders, maybe a turbo? I can see where this is going

Ran max in duty cycle mode, max load ipm, lets not get into docs please. Gotta look over the log more but its impressive. With this power the Nomad is rigidity limited and it should rip on a well setup Shapeoko.

So…how much more voltage you think it can take?..

@LiamN its shown to be plenty powerful already, the next step is making it smooth. A little weight wouldn’t hurt, it already spins up ridiculously fast.

Yep, and the electronics aren’t going to be able to respond at the sort of frequencies seen when the cutter hits material.

What sort of tooling would be required to make, fit and balance a flywheel for these kinds of RPMs?

Honestly was debating on trying to see if one of the smaller turbo manufacturers might take on the challenge to dynamically balance the shaft/nut assembly.

On my unit without a fan, you’d have to press off the lower bearing, press on a fly wheel and then replace the bearing. I’m guessing it wouldn’t be too hard if you had access to a lathe.

This is probably the area where the inefficient squirrel cage VFD controlled motors have the advantage as they inherently adjust motor torque current with their mechanical slip angle.

BLDC motors generally have less mass on their stators. They just have permanent magnets and not stator coils. This makes them more efficient but it also means less mass spinning so a small flywheel might not hurt. Definitely get it balanced though. Tuning the PID controller though should lessen the impact of the this.

@LiamN its shown to be plenty powerful already, the next step is making it smooth.

A two flute endmill at the same DOC would halve the cutting force per flute. Increasing the endmill diameter would proportionately decrease force for the same MRR. Here’s a 3/8" 2 flute endmill that could do both. 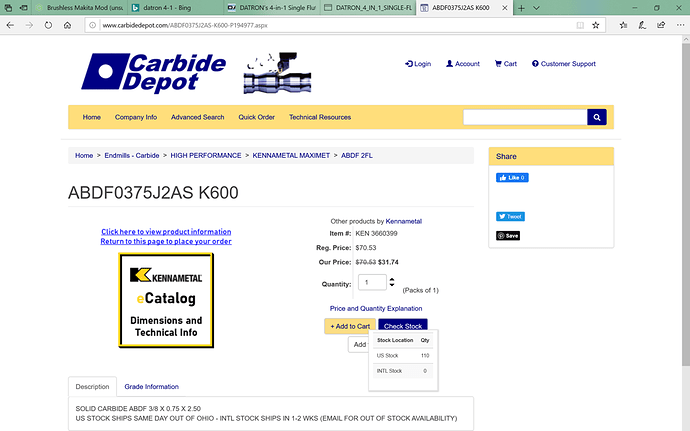 image1080×675 141 KB
Here’s how it could be used in a manner consistent with the manufacturer’s speeds and feeds. 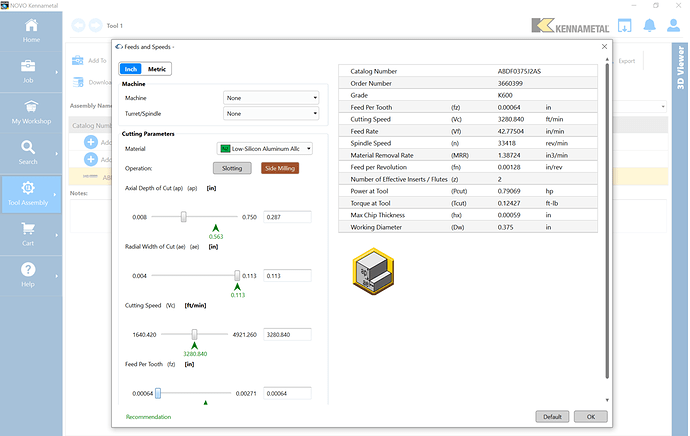 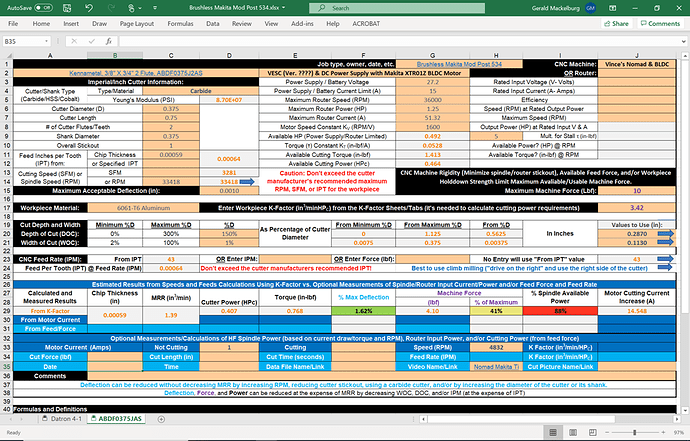 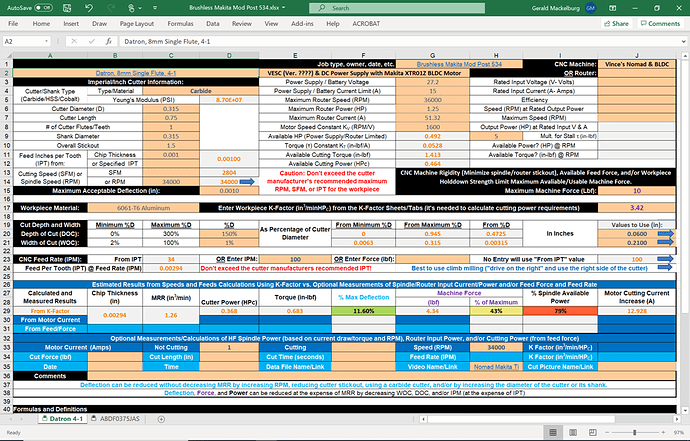 So…how much more voltage you think it can take?..

The Datron endmill is only rated for 34,000 RPM, but the Kennametal is rated for 50,000 RPM. That would give you a MMR of 2 cubic inches per minute without increasing forces (if you could run it that fast and had sufficient power/cooling.) 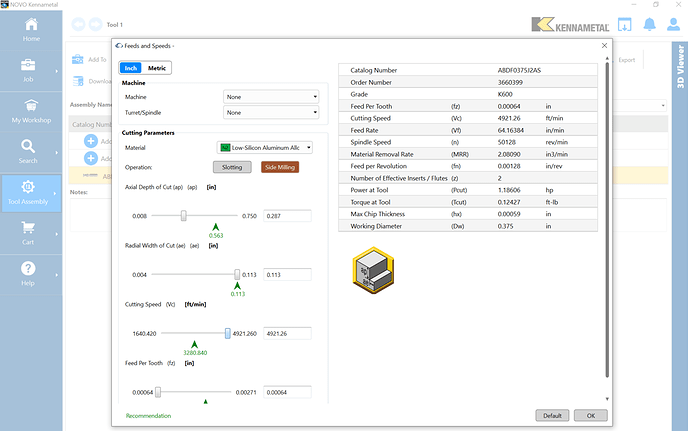 A two flute endmill at the same DOC would halve the cutting force per flute.

What does that do to the observed force on the spindle?

What does that do to the observed force on the spindle?

Cuts the impact forces in half and doubles their rate, right? Using more of the helix (DOC) seems like it should help smooth things out too (like helical/spiral planer and jointer cutter heads.)

So same average force but less vibration input to the spindle assembly.

Figured I was better off asking you than assuming

That Datron 8mm was the only high balance flat endmill I had in the arsenal, and with its wiper, produces the best finish at the highest MRR out of all my endmills. One day I’ll pick up a few kennametal though, even if that max chip thickness is weird.

I’ll test out multiflutes when I get back in town. It seems the Nomad should be able to push even a triple at decent chip thickness for dry cutting (very different than flood or mist coolant).

What’s a good way to share the csv files?

What’s a good way to share the csv files?

Compress them to turn them into *.zip for compatibly with requirements?

So same average force but less vibration input to the spindle assembly.

Increasing the number of cutting edges and reducing chiploads should both reduce the excitation forces on the machine from cutting. Abrasive endmills?

Makes sense now you mention it, high helix cutters which always keep part of a face cutting, multi flute cutters etc. It’s an argument for depth over width of cut too. I guess a fly cutter is the high vibration counter example.