We just uploaded CC 637 to https://carbide3d.com/carbidecreate/beta . The changes are:

Give it a shot and let us know what you think.

Care to shed any light on the new linear array cmd? Is this similar to what we see in Fusion where you can create a gridwork of holes or other repeating features?

It allows one to do a grid or other repeating arrangement of objects: 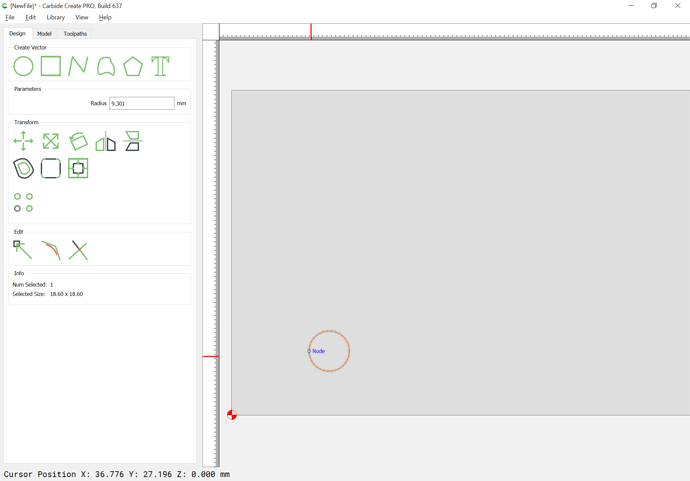 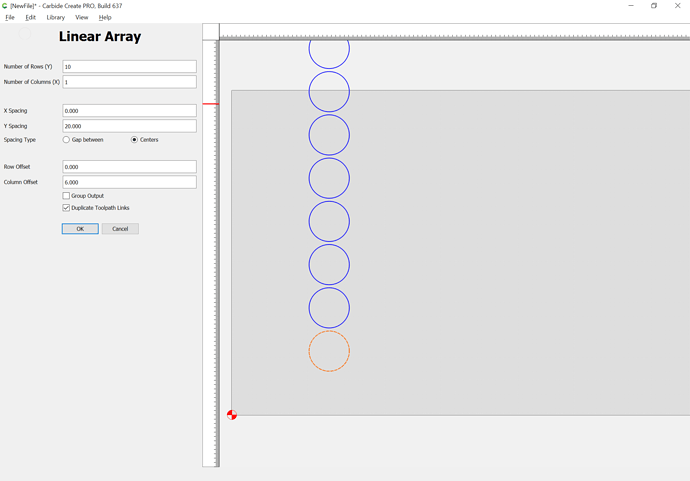 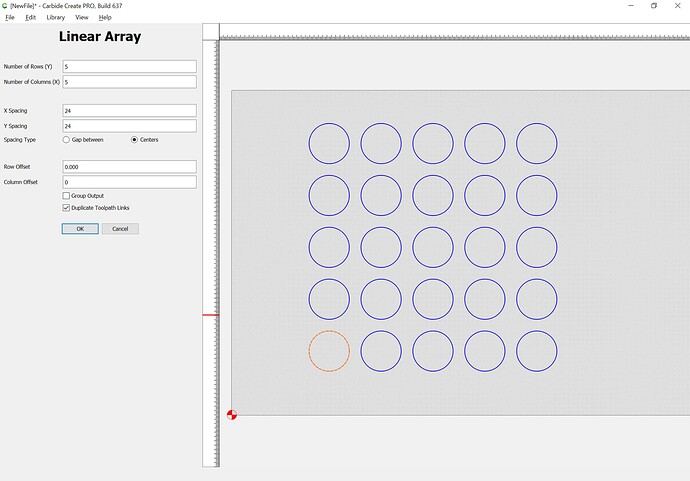 This is a great feature! Got a chance to give 637 a little workout…found a couple of things:

EDIT: Interestingly, you CAN trim the other line between those same two points: 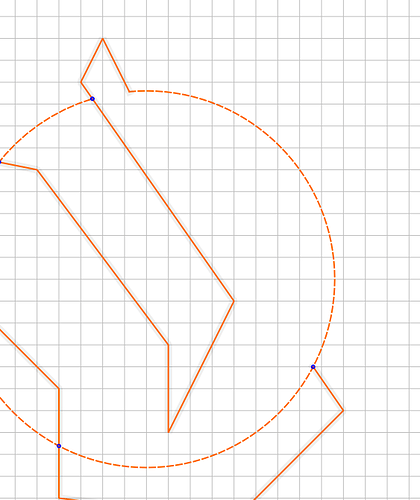 EDITED AGAIN: It gets even more interesting…you’ll notice in the image above, the dot that used to be at the top of the circle is now gone…but if I click on the top right of the circle again, THIS time, it trims - from the non-existent point! 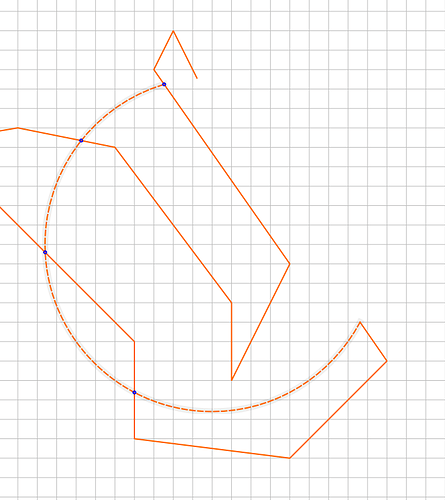 Why would that be??? Is this a bug or a feature?

Why would that be??? Is this a bug or a feature?

Bug. There are probably a bunch of these because this is a really complicated chunk of code. Can you add a second layer to make the locations of the clicks to cause the failure and then upload it here?

For example, if you move one of the objects while in the Array dialog

Dragging should have been disabled, I think.

Additionally, if you change a value in one of the edit boxes and tab out, undo does not put the old value back. I

Not sure if the global undo is interfering with the entry boxes or not.

So I CANCELED the dialog and came back in - and the value was still changed.

So you think the values should persist only if the user clicks OK?

Noticed that when I use the ctrl/d option to duplicate, the program will shutdown and close. Is it a bug or am I doing something wrong? It worked great before.

Bug, I’ve logged it — hopefully it’ll get fixed in the next version.

Dragging should have been disabled, I think.

OK…but why? I think it’s OK, as long as anything you do in the dialog is reversable with Cancel.

So you think the values should persist only if the user clicks OK?

Yes…if the user chooses “Cancel”, I would anticipate things being as if I never went into the dialog in the first place. I think of modal dialogs as units of work…so it’s all or nothing - it rolls back as a single set of changes.

I noticed that this is NOT the way the modals work, in general. I noticed that if you press OK in a modal, and then click “Undo”, you end up undoing the sub-tasks that you did in the dialog, one by one. That’s not what I would anticipate. I would anticipate that the entire unit of work done by the modal would undo. Once I commit a modal, I’m basically saying I’m done and I don’t expect to do the sub-tasks I did when I was in the modal. I can undo everything, but not the things done within the dialog independent of each other. Does that make sense?

Noticed that when I use the ctrl/d option to duplicate, the program will shutdown and close.

Whoops, we used that code for the array command and broke it. That will be fixed in the next release.

Yes…if the user chooses “Cancel”, I would anticipate things being as if I never went into the dialog in the first place.

Good argument. Should be no problem to implement.

Way cool! Circular array next? (No rest for the weary

Yes! But why stop there? How about arrays that are evenly distributed along any curve?

Way cool! Circular array next? (No rest for the weary

Yes! But why stop there? How about arrays that are evenly distributed along any curve?

this would be the goal.

Looks pretty good…
Found one SMALL snafu (so small you might not need to repair it):
Go into Array…move the item (nice: All the items move together)
CANCEL
Everything reverts (EXCELLENT)

The REDO queue, however, still has the moves stored in them.

@robgrz You can hate me now, if you want:

There is an issue with Redo/Undo/Cancel in the Trim command as well:
Steps:
Starting with this drawing: 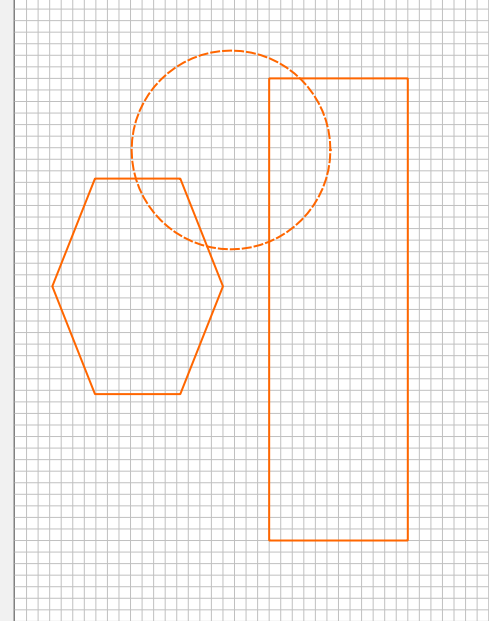 image489×621 37.7 KB
Enter Trim and Trim any two intersections (I played with the circle and square 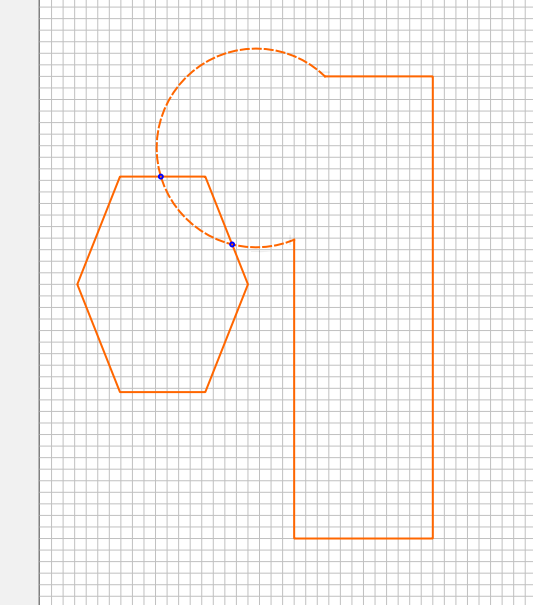 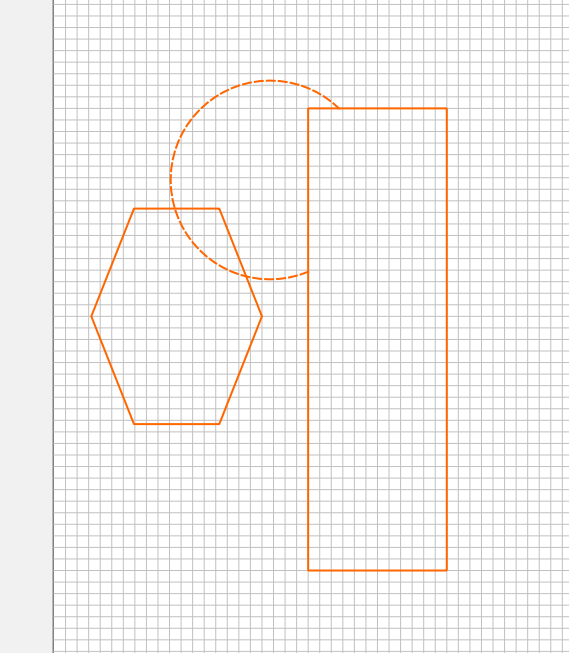 image569×653 40.3 KB
One of the two removed curves does not reappear on Cancel…it is saved in the UNDO buffer, though.

NOTE: it’s always the first vector trimmed that does not revert on Cancel after UNDO and REDO. Perhaps it’s a counter that’s not getting decremented on REDO???

Yes…that’s most definitely it - for every REDO, you get more and more vectors not reverting (plus odd things happen even within the dialog - the first redone trimmed item comes back when you hit redo the second time!)

The REDO queue, however, still has the moves stored in them.

I’m of the opinion (maybe I WAS of the opinion) that adding them to the redo queue is the right call. If you redo them, you can undo them without consequence. The second you execute another command that uses the undo queue, they’d be flushed. It’s one function call to preflush them, so it’s not a big deal, but I’d be curious on what the general opinion is. (Now that I’m typing this, maybe I’ve changed my mind. It’s always possible to preflush the queue but it might not be possible to always allow redo)

I’ll have to take a look at your trim problem. Can you upload the file?

It really works with any file…adding it to the redo queue is fine…but when you Redo, it looks like you’re not updating a counter (or pointer), because you lose one item per Redo

I’ll put together an example

Sorry @robgrz That file will not demonstrate the issue (wrong instructions)…this one will:
Undo Redo Cancel defect version 2.c2d (1.6 MB)