So - I love that Carbide Create is free. But - I hate that it lacks so many basic features and we have to either implement workarounds or use secondary software and then import those externally created vectors/images into CC. I would think that for any design program, these features would be stock:

1] Within the Scale command, allow for maintaining aspect ratio or not so that we can scale wider OR taller and not be forced to simply scale the whole vector in proportion. I know we can choose Scale and then drag - but that’s not precise. Changing the grid size just to be able to drag-and-snap for a resize and then setting the grid back is a cumbersome workaround.

2] Curve text on a path - like around a circle. I know we can do this easily in Inkscape or Canva and then import that file. But - that’s a lousy workflow.

4] Not have to tap [Enter] and [Apply] and [Done]. It seems that whatever command/tool I’m in, I can’t just enter the new value and hit Done. It doesn’t get applied.

5] UI elements disappear. Like - it took me forever when I first got it to figure out how to change the workpiece dimensions. The settings gear disappeared and it took a long time to realize it disappears when a vector is selected. You have ti deselect everything to bring the settings and grid size options back.

I know I can use different software that’s more feature rich. Buuuuuut - I just don’t want to. CC is cross-platform (unlike Vcarve) and is otherwise a nice tool.

These are just a few examples of this UI’s clunkiness. Again - I appreciate it’s free with my Shapeoko, but you can’t deny it’s clunky. Are there any plans to update this software with some of these basic design features? 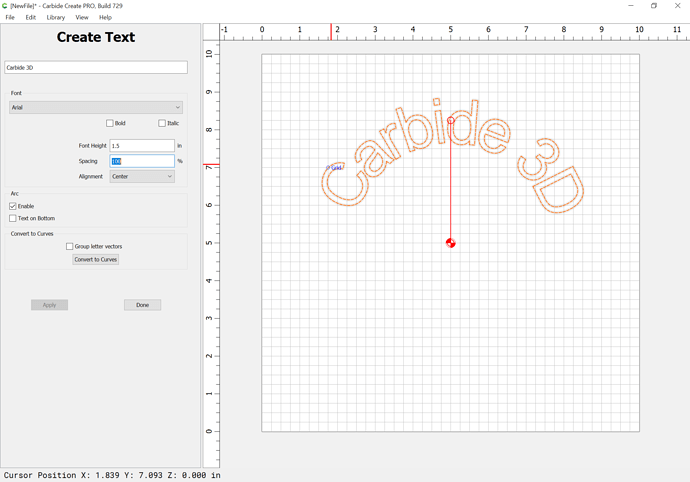 Awesome! Is there an auto-updater now? Or an update notification within CC? I had no idea there was a V7 with the text arcing.

Any idea about scaling in one dimension only? Or “just hit Done to exit command/tool and apply changes”?

We’re releasing our first public build of Carbide Create V7 today with a lot of big changes. The download can be found at: Carbide Create Beta Downloads for those that want to try it out. It includes major internal changes but our testing has shown it to be stable so we’re ready to share. (That said, we’ve changed the file format to support all of the changes we’ve made so please give it an initial test on a non-critical project.) And now, on to the changes… Tabs are now a part of the vecto…

and on the blog:

After weeks of beta testing, we’ve released Carbide Create V7 with a lot of big changes. The download can be found at: https://carbide3d.com/carbidecreate/do...