Well, I wouldn’t say no one has mentioned why.

Cutting down my earlier post (in which I originated the reference to perhaps irrational but nevertheless extant feelings) to its core:

the ticking clock (or should I go with “tell-tale heart”) of a subscription just makes it feel like I’m losing money for every day I’m not doing something, and that just sucks the enjoyment right out.

Being a software developer (although mainly mobile) and formerly extensive Adobe Illustrator user there are a few things that drive me nuts that are simple, but imperative.

Side note: anyone wanting a sneak peek at some Pro functionality, checkout this other thread I started.

Hey all - First looks at Carbide Create Pro! This was originally a 2D design but using the new Pro tools, I added a 3D contour to the soldier, stars and the stripes. We’ll post more info on this as we keep going, but I wanted to give everyone a glimpse into what we’ve been working on lately! [CC-Pro-Test] [CC-Pro-Test-2D]

Two things that are not in CC currently that seem like no brainers are:
1 - the ability to move an object around by using the arrow keys instead of having to use the mouse or type in a numerical figure
2 - The ability to align one object to the stock center without having to create a second dummy object.

These are things I would use pretty much every session.

Not to pile on but the subscription model is a non starter for me. I can see paying a flat price for a year of upgrades, but if I don’t need the new features that come out after that, why do I keep paying? I get why companies do it, but I don’t see the advantage for individual humans.

Vectric Aspire is in the $2000 range plus $400 per update which is every year or two. We’d like to get close to Aspire in terms of features but realistically, that will take some time.

For now we’d like to target a “price” of around $750 for Carbide Create Pro, or about a third of Aspire. We do not like the versioned releases with costs to update (V1, V2, V3…) so a subscription works better for us.

Based on almost everything we’ve seen other companies do when they switch to a subscription model, the annual cost of a subscription is about a third of the single-license cost, which would put Carbide Create Pro in the $250 per year range if it’s $750 to start with.

At $250 per year, it’s the cheapest thing out there for this kind of 3d relief modeling. (Aspire, Enroute, Carveco/Artcam, Type3). For our professional user base (the for-profit group) this price shouldn’t be a big deal but it could be significant for a home user.

We decided that $120 / year is where we’d like to be. Again, it’s cheaper than anything else out there and you’d have to pay for 6 years before it’s “break even” with the single license cost alone.

Based on this thread we came up with an addition to the subscription model, which turned out to be close to the Jet Brains model:

Buy a license for $360 and you’ll get one year of updates. You can continue to use the last version available during your update period forever. If you want to continue getting updates, it’s $120 per year.

Finally, it’ll probably be free-to-use for a while as we get the feature set worked out so there’s plenty of time to decide if it’s right for you.

That sounds reasonable. I am looking forward to fiddling around with it.

We just fixed the one-object-align problem. It’ll be in 404 when it’s released.

That sounds to me like a perfectly justifiable subscription fee. It also sounds like a cromulent permanent license cost and upgrade path. I would be more than happy with those options, and I’d probably go with the $120 subscription, billed annually. (Strangely, if it were $10 billed monthly, I would be much more conflicted.

We just fixed the one-object-align problem. It’ll be in 404 when it’s released.

Why are you using words I have to Google? (Pretend I have the vocabulary of a 5th grader)

I don’t see us having a monthly subscription, it’ll be annual or permanent.

…and good call on 404, that would just be bad luck somehow.

You can include enhanced (dedicated) capabilities.
Carbide Copper can be better; maybe this is an opportunity and it is something that several of us would pay for, if it is well developed.
Finally that is 2D Milling.

Give us your requests at:

Several people have mentioned wanting to see more updates to Carbide Copper when asked about Carbide Create. This is your chance, give us your top 5 requests for Carbide Copper.

Awesome, thank you so much! Is the “move object with keys” doable in the future? It would be SO helpful.

Also, i think the $120 per or the $360 buyout with optional updates sounds reasonable. Appreciate you asking for feedback instead of just plunging ahead.

Yes, we’ve got “nudging” with keys on the todo list. We have some trouble in the current system with how key events are passed around so once we get that figured out, we’ll get the nudging implemented.

How would you see setting the nudge distance?

Why are you using words I have to Google? (Pretend I have the vocabulary of a 5th grader)

He does it to me all of the time, I think he keeps a dictionary in his lap while he types

How would you see setting the nudge distance?

Nudging, love me some nudging. Many other softwares I’ve used will allow you to set a nudge distance in the settings, then you also have alt+arrow that will give you a small nudge, and ctrl+arrow to get a large nudge. So basic is just arrow (which can be set in settings), then alt+arrow say 1/2 of settings value, and ctrl+arrow gives you settings nudge X2.

Dan is correct. Being able to adjust it in preferences would be the best if possible. Here is a screenshot of Adobe Illustrator adjustable distance as an example. Really appreciate you looking into this. 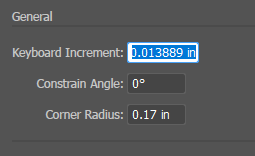 EDIT: Just got to thinking that even if the task of letting us input the distance we want proves too cumbersome to start with, if you could just re-purpose the code for jogging increments from Carbide Motion into something like .001, .01, .1, 1 that would be better than nothing.

One of the biggest Daily issues using CC is the fact that when a file gets to complex the system crashes and closes the program.

When saving complex files after already having tool paths set and was done thinking, this can also cause a crash during the save. Upon opening files are corrupted, having to completely start over.

When doing separate tool paths on large files, the depth is always .394? Even when i just did one set at .125. This can cause the system to crash immediately when initiating a pocket tool path.

Also while we try and set parameters the system is already trying to compute G Code. If we could select our bit, set it’s settings then our start and max depth, offset tabs while G code generator is idle and theb once ok is selected let the system compute G Code.

I purchased the XXL to make big carves, complex carves and I have CC crash a minimum of 10 times a day when using it.

We’ve put a lot of work into build 400 and later to make it handle large files better. Do you have a file you can share with us for testing?

Also, we just added code for the next release to default the cut depth to the last depth entered, or the stock thickness, whichever is less.

This. Or open source the free version or something so we can all contribute to increase the pace of feature delivery.