Carbide Create Use of GPU

Trying to import some possibly large SVG files into Carbide Create and it seems painfully slow. Watching Task Manager, it’s showing something like 15% CPU utilization 530+ MB of Memory utilization. What it does not show is utilization of GPUs.

Does CC attempt to use GPU? (I’m over my head at this point, but wondering. If so, why does it not indicate it? And do I need to do something to speed it along?

You’d be surprised of the fact that many CAD programs are more CPU demanding than GPU.
The shocking thing is most of them use only a single core for everything

Most likely the files need to be optimized — could you post them here or mail them in to support@carbide3d.com along w/ notes on how they were made? Make sure to send files which have the correct appearance when viewed in a 3rd party SVG editor or previewer.

If need be, load the file into a 3rd party drawing program first and use commands to:

The GPU is only used for rendering, not for any calculations.

We’d love to take a look at your SVG file. CC does a lot of filtering to “fix” some of the SVG files that get brought in but you’d need to have a really big file, or one with A LOT of the problems that CC is trying to filter out, to cause a meaningful delay. Either way, we’d like to take a look, it might be a good way to optimize a bit more.

I’ve figured out a couple of things. The TurboCAD image that I anticipated using was essentially a line drawing. All of the elements were non-transparent. Apparently when I created the SVG everything became transparent which would increase the amount of detail captured by the SVG. That became clear when looking at it with Inkscape. Add to that the fact that it was looking at 3D elements and I can only imagine the increase in vectors that would impose.

More learning. At least I’m retired, so I’ve got the time. Just hoping I’ve got the brain power and patience. Right now, I’m thinking that one approach may be to simplify the original TCW by deleting a lot of porch rail and siding detail, then saving that as a JPG or PNG. Next set that as background in CC and trace over it in a contrasting color.

I’ll have to try to email the latest SVG based on a simplified TCW,which CC tells me has “Num Selected: 178,905.” I assume that means the number of vectors it identified. The SVG is to big for your download to handle.

Greatly appreciate the help and insight into what’s becoming a bit tricky. But then, I never did like messing with the simple things.

For what it’s worth, the really complicated designs I’ve seen have about 4000 vectors in total, and files with that many vectors can take a really long time to machine. At 178k vectors, your file might be a new record.

Looking at the SVG using Inkscape, I can easily see how the vector count really mushrooms. Looking at one of the ballisters in the originating software for example, I think I see 8 lines. Jumping over to Inkscape it looks like there are 50 - 60. I wish my grass could grow like that. One way or another, i think I’m going to have to trace the non-transparent JPG or PNG.

I manually created the attached sign using a lot of time and templates with my Bosch 1617 router. Too many accidents to cover up. When our grandson’s wife saw that, she practically drooled. 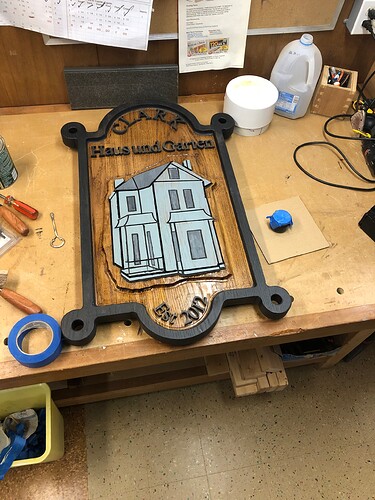 This one won’t be as big but it better be a whole lot quicker.

The SVG mailed in to support@carbide3d.com was too complex for Inkscape to do anything w/.

The most expedient thing to do in such cases is to trace a pixel image:

It did eventually finish ungrouping: 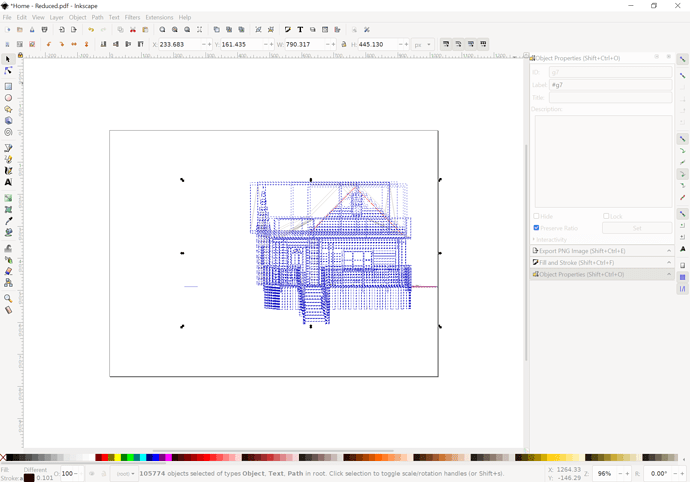