The suggestion is that “Time Remaining” also show the estimated clock time.

One thing I would love is to have built in checklist that can be enabled or disabled. Pilots know how to fly their planes. But they have checklist because repetition also makes it easy to forget something. I am still new but learning very fast and the one thing that I wish is that I could put a checkpoint (ie Install Dustboot), then click on OK. If you click start and the next screen is to “Turn on Spindle” , if I forgot to slap on the dustboot, then the spindle drops and yes I can get it on but a hassle. The ability for users to “enable optional check points” during the process will allow for any user to use or not use them. (so everyone is happy).

In laser printing you can trace the outline which would sort of be a nice feature. I have learned to always print my job sheet from Vcarve Pro to make sure that board size and material size in the job match. The ability to do a quick “outline trace” would also confirm that and take just a few seconds. I would think that it is a feature that beginners would certainly use and appreciate and if they don’t want to use it, they don’t have to.

Someone mentioned having a visual guide which would also show where the router is at in relation to the board which would be very nice!

I would like to see estimated time till a toolchange.

We have the overall progression, we could have Tool change at 35%, or 90% till next tool. I like the idea of knowing when the next tool change is.

I would like customizable hotkeys, I use a Xbox one controller for my jogging, and It’d be awesome if I could just map what keys I want.

Since I have the bitsetter, and the touch probe I would like to change the machine initialization (or end procedure).

Best example I can give, Right now when a program is over it goes to the home position. I’d like to change it where it will go to the tool change position and let me take out the bit. I know I could do this in the post processor, but having macros or other items I can change at the controller would be fantastic.

Macro to use the bit as a reference in setting the material. (This may be way off but hear me out.). I’d like the bit to be able to do an "outside Left position of the stock, and allow me to move the bit down to use it to reference to but the stock up against. I get that it is one reference point, but 1 reference point is better than none.

It seems like we are re-hashing the what you want to see in CM since we don’t know what has been deemed to make the cut but having CM calculate if the job is within the operating limits of the Shapeoko after we set zero would still address many issues reported here where the limits switch have been triggered while running the job and ruined their projects. IMO, it should say something like Y limit exceeded at line XXXX.

Happy to report that the functionality is on point and after 8 hours of machining there weren’t any errors or issues.

Uploaded some pretty intense 3d machining fusion 360 files with multiples toolpaths and toolchanges per and it worked flawlessly.

edit only onscreen controller was used for jogging

There is what appears to be a focus issue with the current version, when used with a touchscreen. From either the jogging or probing screens (at least), a button which is touched retains the focus - which means that the keyboard doesn’t work. The workaround is to just touch some non-button portion of the screen to remove focus from the button.

(My usual workflow is to use the touchscreen to get in the ballpark, then the bluetooth keyboard to get more precisely located from inside the enclosure.)

That’s the only issue I’ve had, though. So far, things are looking good.

What device and operating system?

And this happens TWICE (so two separate bits snapped)… vs never before. While this could be EMI on my side in theory, I’ve never had this happen before and twice is… well … makes me wonder if something changed on keyboard repeat rates or something else in CM509

Sorry, should have said. It is a Surface Pro 4 with Windows 10.

I guess I should note that it has a comically-high resolution (2736 x 1824) and out of the box is set to 200% scaling. CM looks correct at that scaling - any higher scaling gives the issues others have mentioned with regards to DPI scaling. I have no idea whether any of that has anything to do with it.

This is just a test build at this point with the following inputs configured :

We do not plan to make the keys/buttons configurable. If gamepad support seems to work well we do envision being able to add more functionality to this feature going forward.

We tested it with a Logitech F310 in XBox mode and an wired XBox controller knockoff from Amazon. Both worked well.

More repro info on my “keypad doesn’t work after touchscreen usage” thing (with 510 as well) - it doesn’t actually require a touchscreen. A mouse click will do the same thing. For instance, if I click on X+, I can see the little dotted-line focus indicator on that button. If I then use the left arrow on the keypad, the focus indicator moves to X-; again and it moves to Y+. Again, and it seems to go away (well, I can’t find it at least) - but one more time after that and the carriage finally moves.

So things appear to be in “navigate the UI” mode and not “drive the spindle around” mode. I will note that page up/page down works at all times, presumably because those aren’t ever interpreted as UI navigation commands.

I reported the same problem with the main keyboard on my Mac… It was intermittent for me. But that was back on 506. 509 has been good for me so far…

More specifically, this seems to fix the touch/keyboard focus problem on Windows touch machines (at least it did on the Surface Book we tried).

Be careful running this build and keep your hand on the power switch until it’s well-tested.

Thanks for the heads up !!!

I like the Log window and “Hide Status Reports” option changes! They work well for me. One thing that still bugs me a little is the file open dialogue. One of my GCode generators outputs files with a TAP extension and I saw that mentioned here by someone else. Can we get that added to the default list? I also think that another list of all files should be available. Like the Universal G-Code Sender file open dialogue does. The default should be all known GCode file types, but another selection of all files should be available as well. 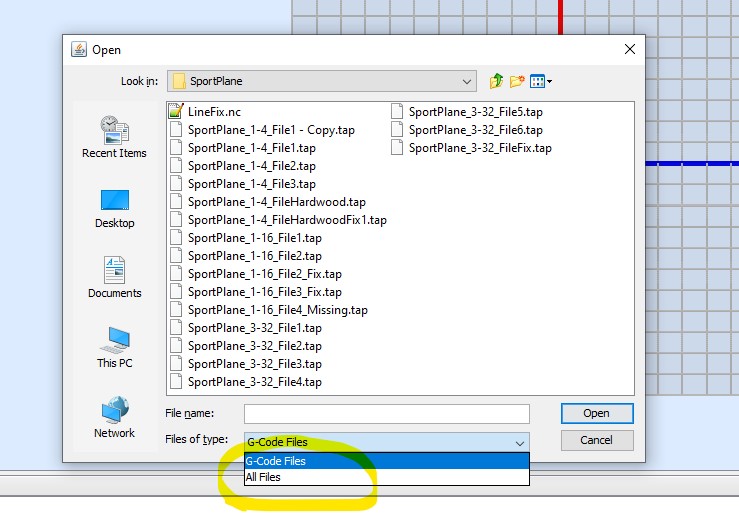 Man your hard to get along with!

I realize that what I’m asking for here boils down to “disable keyboard UI navigation for the entire Jog screen,” so if that is off the table then what we’ve got will have to do. If that is the case, then some alternate keys for jog (specifically 4, 6, 8, 2, 9 and 3) would not go amiss - I could just set numlock and call it a day, I think.