can you set defaults then have a page in settings/preferences that allows the user to set custom hotkeys for actions?

Hmmm… good question. Assignable would be awesome, but I might lean towards some variation of WASD as a gamer.

@stutaylo I cant ‘like’ that idea enough…maybe in V 51X? If we’re suggesting keys for @robgrz I would say take a look at Keyboard Cheat sheet for Carbide Create and Motion for some inspiration Also don’t forget that some key combos are reserved by the OS.

@robgrz since this is an easier task than before maybe move this to its own thread just to keep bug tracking and requests clean?

Downloaded and and jogged around a bit. Size is fine when sized to my 15" laptop screen size.
Rapid position is great with my HDZ and using the PWNCNC Boot for the center and the RIGHT side. It stops about 5mm or so from the right rail Unfortunately less than needed on left side. I pulled off vertical rail of the boot and the ear used to mount is 12mm to the left and it hits the LEFT rail. so I have 6 of 9 I can use which is vast improvement. So far bitsetter works good.
I like it so far. got to go to work. Can’t play any more today.

@robgrz Same scaling issues on Mac as reported above.
Also no way to zero Z, if I open CM .431 and go to the same location that I set as zero in CM V5 it reads as 0,0,0 so GBRL is getting the correct 0 on Z, but CM V5 is still displaying -47 mm.
Can any one else confirm this? Has anyone with this issue run a job yet, if so did it send your end mill to China?

It’s small, but I’d still really like to see rapid positions be compatible with Z-independent dust boots again. I have the HDZ and the PWNCNC dust boot and the left side carriage crash is rough. Please fix

Also, I’d love to see hot keys for start, pause, and stop. That would allow for less track-pad movement, and allow for home-made external buttons (like arcade style).

A few comments on the settings page: 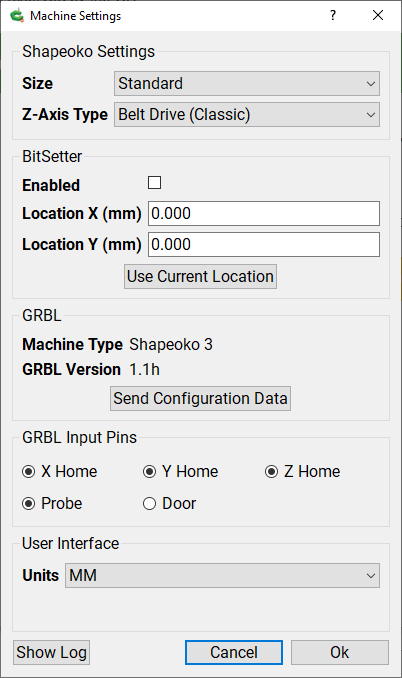 This being said, I love where CM is going implementation-wise, it feels much more reactive/lightweight indeed.

Wow, this never crossed my mind (and then again I’m silly for thinking these would have been options, who would install limit switches on only X or Y or Z…)
I’m afraid the “machine settings” menu is not the best place to have live status indicators, and using radio buttons looks a bit weird to me, skeuomorphic or not

I have read most all of the post on the new 505 It sounds like some great up dates… And for someone that knows nothing about gcode. When I read about a new release CM and the need to keep my finger on the off button then I am now sure I want to make the change just yet.
Are there any videos on using the new 505. Posted.
Jeff

RE: VER 508. As others have mentioned, the Z axis not being updated on the left hand side (see image). We now have to maximize the screen in order to see all the jog locations, etc but that is no big deal. 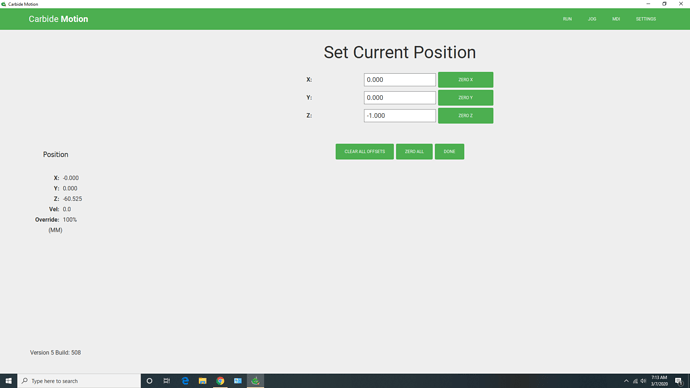 This new build is nice. Some nitpicky things… the input pin radio buttons as lights aren’t intuitive (I selected them all during configuration because I thought I had to). Maybe just swap positions with the User Interface box below, separate it a bit & name it differently.

But again, nice! Thank you. 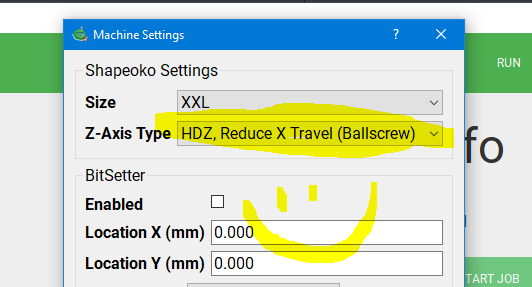 I’m coming from CM v428. in this version there’s no option to open .gcode files; only .nc or .egc. Was that changed sometime since v428? I can’t (yet) figure out how to save .nc out of Vcarve Pro.

Gave 508 a spin on some test cuts after re-tightening my belts.
Overall, the UI feels more snappy and while there are some layout changes, they’re either equal or better than before.
The bug where the “Z” shows the absolute in the jogging screen was mentioned earlier here.
While uploading new settings (wanted to see if I missed any from wmoy’s earlier post) the underlying UI flickers a bunch of times from 'ready" to “not ready” and back, not a huge deal.
Now that the “insert new bit” dialog has more than 1 button… I would love the have an “abort” option. Use case: first bit went fine, but I change my mind on the 2nd bit, either because of some physical thing, or because I misplaced the bit or I end up “maybe” moving the machine while changing the bit.

To make that fancy, that same screen maybe could have a “home machine” button, to give me the option to re-home after a bit change (heck, since I have a bitsetter, giving me the option to rehome on any bit change might be interesting, especially once I can go to inductive homing switches).

A super interesting option would be to have a “Skip this bit” option… in case something went wrong in the 2nd bit phase, on rerun I can then just skip the first bit entirely (yes I can hand edit the gcode of course, but this would be a nice beginner friendly middle ground)

I still would like Carbide Create to put a special comment in the gcode with the name of the toolpath… and then have carbide motion show that as “Current toolpath” or something. Sure percentages are nice, but in CC as a human I named things, would be nice to see those names back during the cutting process

The earlier request on ETA I’ll also second, it would be nice to not only show how much time is left, but also what the wall clock time of that estimate is. It’s easy math, but as a human I have to keep doing it over and over…

@fenrus - Good suggestions that seem to mesh with where we want CM to go. I’ll dig through them on Monday

I have not tried the new versions yet but if it is available, the ability to keep in memory the last command sent to the controller and return to that command when communications have been somehow broken. So when the dreaded EMI/static discharge kills the communications and the Shapeoko stops, it is possible to return to the same spot after reconnecting and homing.

have an “abort” option.
“home machine” button
have a “Skip this bit” option
comment in the gcode with the name of the toolpath

It would also be good to have a visualizer, though i do not know if this is something you want to ever do with carbide motion. It is nice to see the process and what is left via a visual digital representation similar to mach or UGS.

I used 505 for a bit & I like it but I’m using the iOT to start my router & the extra dialogs slow things down, so I’m going back to 417 for now. I saw in another thread that the code already exists in CM & it just needs set up in settings, so I’ll anxiously wait for that…