We’ve just finished a new build, #356, of Carbide Motion that cleans up a lot of internal junk that’s collected over time.

Most importantly, it includes:

These are almost all from the email poll that went out about two weeks ago. It’s a big list and we’re more than a little afraid to release it broadly in case one of our changes contains a bug. If you’d like to try it:

If you have a Shapeoko with limit switches, you’ll have to enable them in the settings pane by clicking on parameter 1005 to change it from “false” to “true” 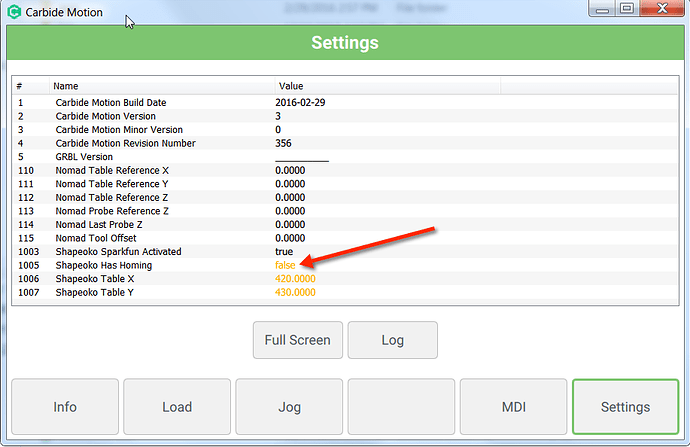 Let us know if it runs well for you.

Overall, love it. Have to use it more, then I can report.

I dearly wish the interface was that high of contrast (cf. Rob’s screen shot). Here is a screenshot from my Win7 machine. The best I’ve been able to do is put the screen in 16-bit mode vs. 32-bit color, but the contrast is nothing like the MC6 on the same screen… 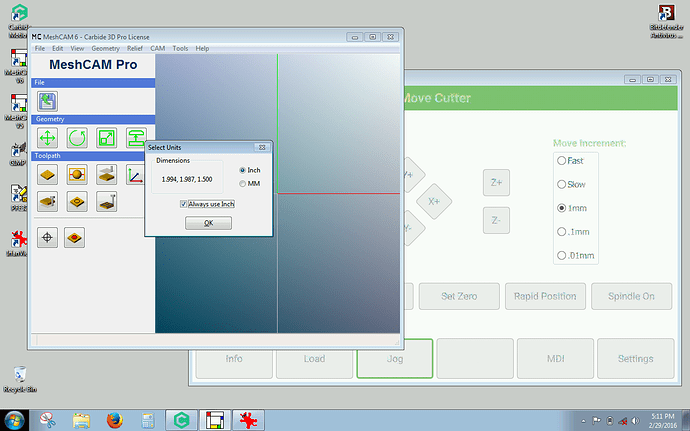 it must be awesome to program this sort of stuff. these little changes make our lives in the physical world so much better

LOTS of code removed. = faster and more reliable presumably so all good too!

This has addressed some major issues I had with my SO3. It is so nice to have a company listen to the customers feed back! Thank you and as aways, keep up the good work.

We’ve been trying to figure out how we want to implement some thing like that. Initially we were thinking about color pickers in the settings pane, but there are 4 key colors that we need to set and that may be too complicated and too ugly.

We’re now thinking that we’ll just add an option for “High Contrast” that turns the UI into black and white- no grey, no green.

What do you think?

@bretrichter- As we’ve been playing with the new code and our Shapeoko with homing switches, this new build really does make the Shapeoko feel a lot more like a Nomad. Glad it’s what you’re looking for.

@1st_Kiwi_Nomad - This code is fun to write when it works, and awful when it doesn’t. It is nice to know that all of our machines will suddenly work better just by pushing out a new version of software.

@iamhankodonnell - Have you run a job yet, or just jogged it around? We’d really like confirmation that users have run jobs to completion without trouble.

Rob, to me readability is the most important aspect of the interface. Just replacing the text color with black would be an enormous contrast improvement. And I would jump on a B/W option and not look back. As it is, I need to dim the room lights just to clearly read the interface. One reason I took the screenshot with MC and CM simultaneously was to verify it wasn’t just wonky screen settings on my part. I’ve displayed it on four monitors now and the results are the same.

Thank you, by the way, for the new CM release. My manners were lacking in my first response. I have not run a job in it yet, that will likely be another day or two.

Why not respect the colour settings which Windows uses in theming?

That way, the user can set it once, in one place, and it just ripples through to the app.

Create an option to turn it off / use the current defaults (or vice-versa).

We’re now thinking that we’ll just add an option for “High Contrast” that turns the UI into black and white- no grey, no green.

That will work… but it may introduce it’s own set of issues. More color depth assists in locating key pieces of data. One color (white) requires one to visually search around a bit more.

I would much prefer letting color blind (challenged, just see better this way) individuals have a way to set their own scheme.

To some extent, it’s hard to judge unless we can see it. Any pictures we can look at?

@WillAdams, yes, I have been doing that since Win95 days. That is what I’m talking about when I say the Windows themes only extend to the window borders and headers (and a select few MS accessories like Notepad).

SolidWorks has extensive color control over its in-window elements 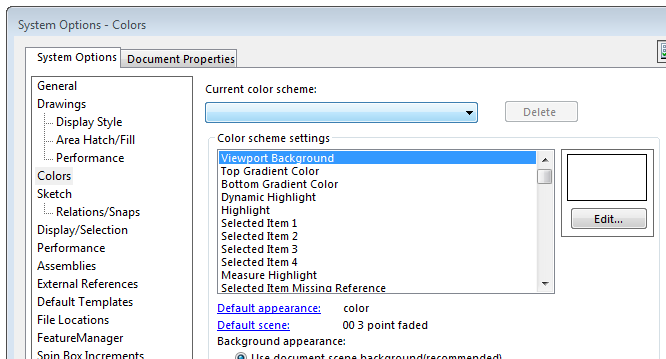 Gimp has selectable (and I assume editable, but I haven’t tried) themes.

But both of those application windows borders/heading have my current Windows UI settings, which are common to all applications, even my now-12-year-old VersaCAD for Windows, which I’ve been using since XP days (and its pure-DOS ancester since 1989, which ran natively up through Win98SE) and retains its DOS-based in-window interface… 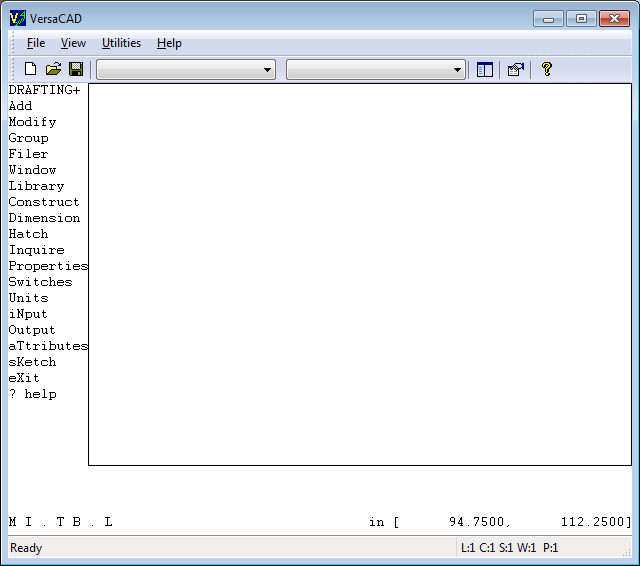 Part of the problem, I think, is that the CM fonts seem to be dithered even in the default window size. A pixel-for-pixel display, even without high-contrast colors, would have better contrast between the letters and background.

Ran into a bug when attempting to load project. gives me an error and then freezes. video says it all.

Properly coded apps should accept the OS-level theme settings (or at least have an option to turn that on).

Will, do other OS’s specify application-level design elements? Windows (at least as of Win7) doesn’t–I’m not counting the utilities that come as part of the OS.