It would be useful to be able to freeze the position of geometry, or perhaps anchor on midpoint, corner store r what not.

You can put everything which you don’t want to move on a layer:

and then lock the layer: 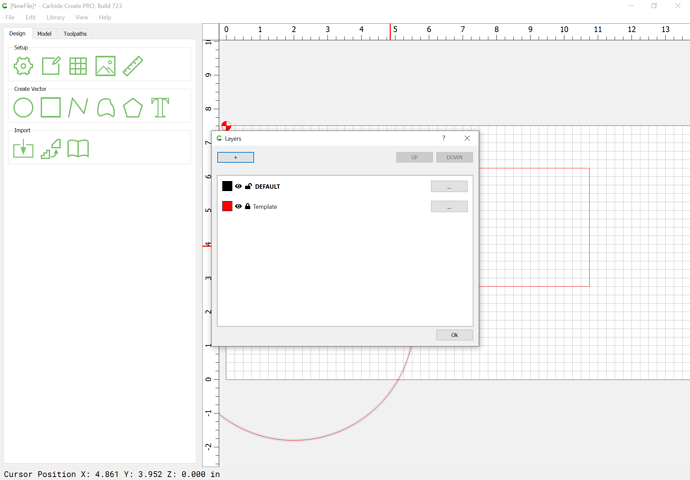 That covers that case.

Will locking all text to be edited in text fields?

That would cover the other case.

Put the text on a layer?

I would like to be able to edit the text content and have it stay put. It appears to me that if you have the text on a locked layer, you can’t edit the content. 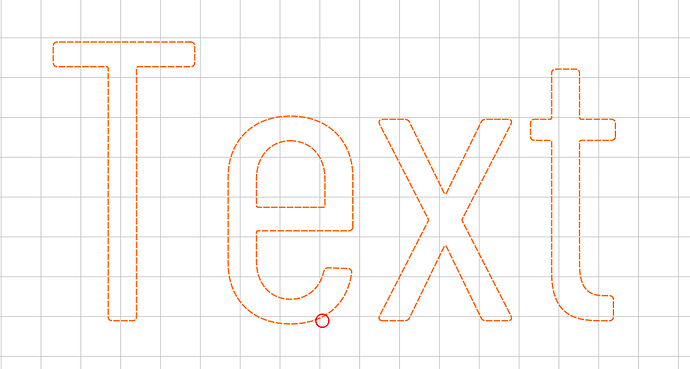 So this is the first time I am noticing the anchor point of the text block. Looks like it can be moved as per the text alignment and if you upsize, downsize, change the text content, everything moves about that point. That was what I was really looking for though it would be cool if the location of that anchor could be frozen but the text still was allowed to be changed.

But it does appear that it really isn’t centered neither by total width of the text field nor be letter count. So something is amiss there. But, as this is the feature request forum, being able to move that anchor point to the top or vertical center of the block would be a nice addition. I will soon have 100 coasters to make, each with a different persons name, in some cases the names are going to long enough that I am going to have to reduce font size to make it fit the bounds. While the horizontal anchor will keep things where they are supposed to be horizontally, there is no such helper for vertical.

It looks like the baseline point of the text is calculated based on the theoretical size of the characters. There is an imaginary box for each letter, and the letters do not necessarily fill that box.
If there were 9 alignment points, rather than just 3, you could set it to Center/Middle & get what you want.
Short of that, you can use the Move or Scale tool to align the text based on it’s actual geometric center.

Baseline is a defined point in a typeface design, calculated from the descender value which is then used to place it in the em-square (which is the box which is used as a reference when designing a typeface).

If you need multiple lines of text which are relative to each other and consistently placed one can use the Array tool to initially place the text objects: 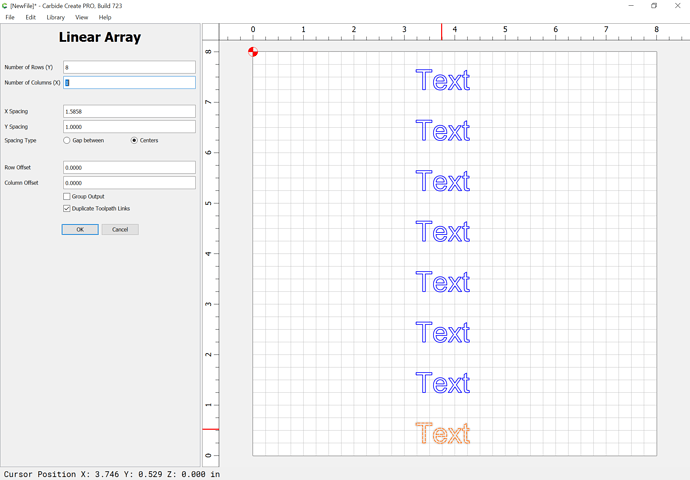 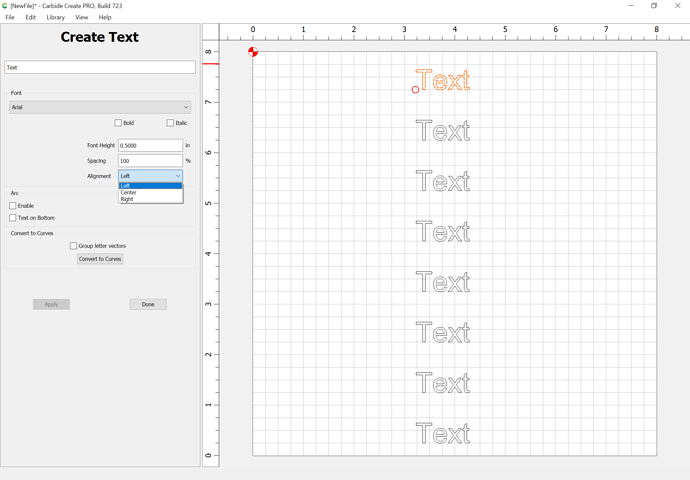 Really though, if you have more than a few lines of text, you should be using a program which supports kerning and has better support for text setting.

Sure, aligning center to some other geometry is easy enough in small numbers. But here is a particular use case I am encountering. I have 100 coasters to make each with a different employee name and number. If each text box were anchored about their true true center (both horizontally and vertically) and everything stayed true to that as I change names (and in some cases font sizes for longer names), that would be a incredible automation. As it stands updating each name, employee number field is a one off operation with, maybe, a half dozen click to align properly, and more if I have to iterate on font size to make longer names fit.

BTW the array tool is awesome. I tried to do this same thing in F360 and it wont let you pattern text fields. CC is starting to win over F360 in almost every way for 2D CAD/CAM for artsy things.

I would suggest using a tool such as InDesign or (La)TeX to lay out that sort of thing. You could then use a CSV for the data — CorelDraw has a feature for this as well.

It should just work to position one of each text field and set it to Center alignment — then it would only need adjustment for size in the case of it not fitting: 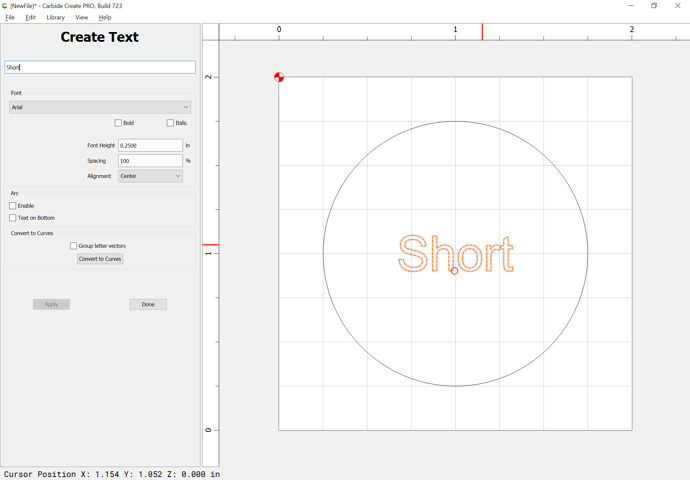 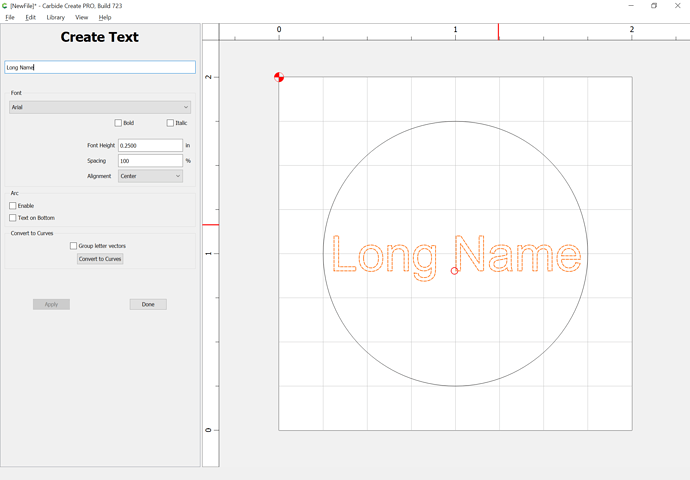 Latex for graphic design. I thought that was only for writing scientific papers where you needed lots of math work to look good on paper.

But as a software engineer, design by code sounds really interesting to me. For the same reason 3d modellng by code is interesting. But SCAD never felt intuitive to me.

It is the only graphic design/typesetting tool which I have found which has as its limits:

as opposed to the imposed limitation of what some specification committee deigns to allow one to have feature-wise.

I’ve used it for tasks as small as tiny chapbooks — see “One Typeface: Many Fonts” in:

or as large as 2,200 page database driven text and advertisement filled publications (Thomas Food Industry Register) and projects as diverse as:

If you just use LaTeX, and can find a suitable package (or packages) for your needs, it can be quite straight-forward to use — see The LaTeX Companion (2nd edition, not first, though the 3rd is due to be published quite soon).

But SCAD never felt intuitive to me.

It’s not intuitive to me either, but it makes sense, and it makes modeling things which are susceptible to mathematical description quite straight-forward.

I’ve been using it for boxes and joinery:

Concepts and design and fabrication considerations

This is interesting stuff. Also my young’in likes playing in the scratch programming environment. BlockScad looks similar and may be interesting to him.

I wish I could find a general-purpose visual programming tool like to Scratch which:

That said, the way I’m developing these days is modeling in BlockSCAD, copying code into RapCAD, then adding commands to write out G-code: 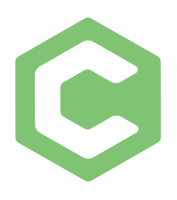 Started working on this at: It’s on GitHub at: but needs a few more modules. First is setting up the cut: There are 4 possible positions: For those who are curious, the BlockSCAD file is at: ...