I just installed win10 on a HP desktop to put in my garage. I5 processor, 12 meg ram clean HD. When I click to start it tells me unable to run this app on this device. CC 5.20 install.
Anyone got any ideas why?

Try to right click installer and install for all users. Some times that works. Also did you notice the Microsoft ++ installing? Usually win 10 works pretty well. If that fails uninstall and remoce installer and download again. Dont pick mac by accident.

Carbide Motion doesn’t work on a fresh install of 64bit Windows 10 either, but that is because needs some 32bit ddl’s C3D don’t install, and it’s not a Raspberry Pi.

Please post a screengrab of the error message you are getting, or a complete transcription of it. 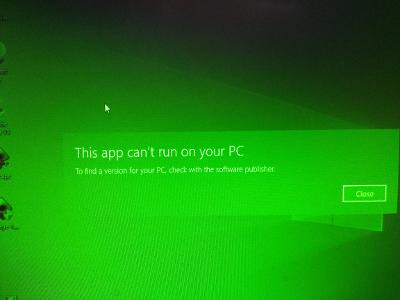 I get no other messages other than this. I have selected the windows install 5.2

I have a desktop in my house and the one i’m trying to get cc installed on is going into my garage so I don’t have to keep walking back and forth. I installed the 5.2 verson inside the house on win10 and it works just fine

Does your computer meet the system requirements for Carbide Motion?

The minimum requirements for Carbide Motion are:

Note that Carbide Create adds the need for 64-bit and increases screen size needs and so forth.

Is your new HP computer an ARM based CPU? I realize that is a pretty technical question, but the ARM based CPU is running a different architecture that most “PC” programs will not run on.

The computer is a HP with intel i5, 12meg ram,250gb hdd
I’ve got a frankenstein computer in the house and was able to use build 520

Sorry, should have caught the i5 cpu.

I’m probably falling down a rabbit hole here, but I’ve been focused on this being a new computer. I wonder if the PC is locked down to only let you install apps downloaded directly from the Microsoft Store.

I noticed on my computer it has “The Microsoft Store only (recommended)”. This may be what is causing Windows 10 to not let you install Carbide Create.

That is a good suggestion. One of my friends just ordered a new Dell and I am their designated IT guy. So I will be installing it for them and setting it up. I will keep an eye out for that in case it pops up its ugly Windows head. Bad Bill Gates Bad!!

Bill Gates, eh? Maybe in 2006 your comment would have had relevance… at the moment, it’s like praising Steve Jobs for the M1 mac

Well guys I think it’s because I installed win10 32 bit system. We had high winds do damage to my wireless provider and my reqular internet is not up. I will let everyone know when I get to try new windows download

FYI If you have a valid license you can download an ISO image from microsoft with all of the latest updates already applied. I have used it several times to reload other peoples laptops. Most of the modern machines have the serial number in the BIOS so all you have to do is activate it with a Microsoft account. I find the image very useful over an OEM version because you dont have to spend days updating. You do however have to go to the OEM site and get their drivers for their propriety stuff like drivers and applications that may have been bundled with your machine when you bought it. Another secret is you can upgrade 8 to 10 even though the free upgrade period ended a couple of years ago.

I think that error is because you are running Window 10 Home S edition. S stands for secure and it does not allow you to run apps that do not come from the app store:

Some Windows 10 PCs, including Microsoft’s Surface Laptop, come with “Windows 10 in S Mode.” PCs in S Mode can only install applications from the Microsoft Store. But you’re free to leave S Mode, if you like.

Luckily you can disable it.

You might have had Windows Defender or Norton block the program, make sure you add it to your list of programs, or check if it is blocked.

Thanks for all the suggestions. I was able to install win10 with an iso file but it was the 32bit version. my final solution was i went to best buy and bought a $35.00 SSD, installed the 64 bit version of windows and all was good.