Is there an alternate and compatible collet system that functions differently than using two wrenches?
Also, what is a a better collet than the Carbide 1/4 and 1/8 provided with the Bit Zero?
Is it necessary to buy bits and collets from the same mfgrs.?

I am not aware of any collet system that does not require 2 wrenches. You have to stop the router or spindle from turning somehow.

You can get more size options from Elair but the precision collets from Carbide 3D are pretty good.

You do not need to buy endmills from the same company you buy your collets from. As long as you are putting the right size tool in the right size collet, you are good to go.

One option is a router which uses a different system such as our ER-11 Carbide Compact Router: The Carbide ER-11 Compact Router is our custom-made trim router packaged for use with CNC machines. We worked with our router manufacturer for a year to develop this router for us. Why buy an ER-11 router? There's only one reason to buy this router...

or you could do a complete spindle upgrade: This is our long-awaited VFD Spindle Kit for Shapeoko. If you'd like something more powerful and quieter than a standard trim router, this is the way to go. We've engineered this kit to be as plug-and-play as possible.

There are other options — I do so many test cuts that some days it felt as if I was spending more time wrenching than the machine was cutting, so I went for a spindle w/ a quick change mechanism, the Mafell FM 1000 WS (which is available re-badged under a different name, and similar units are available from AMB/Kress):

Thanks for the great suggestions. I’d like to get more experience before spending too much more on upgrades for a machine I’ve only had for 4 months. I just wish the Carbide 3D collets would allow me to change 1/4" shanks w/o completely unscrewing the nut, removing the collet with pliers, and then reversing process to put in new bit.

If you have to use pliers every time, then there is something wrong. I have found that applying downward force by holding the bit in one hand, and tapping the shank of the bit using the 13mm wrench, will free up things most of the time.

If that doesn’t work, you may be over-tightening the collet nut, or perhaps there is a physical aberration that is causing the problem. Check for rust spots, deformities or debris, and make sure the collet and receiver are NOT lubricated or oily - they should be bone dry.

Do you have the collet inserted into the nut properly so that the collet is captive and removed by the nut?

Thanks Michael. However, I do not have any data that specifically reads out when using two wrenches to tighten this thing up. How tight is too tight? There is no calibration displayed to stop…sorta’ like a torque wrench would be. I’ve tried so many tightening techniques and frankly, until someone can give me a calibrated measure to go along with tightening, there is no sense in saying it is too tight. Now, too loose, that’s easy.

When removing, loosen until the nut catches, some folks suggest a gentle tap on the nut w/ the large wrench at this point — don’t remove the endmill, but instead remove the entire assembly — the tool should come out of the collet.

Clean everything and put things away, if need be, installing a probing pin in the collet before putting it back on the router (never tighten the collet/nut w/o a tool in it).

If you still have difficulties, let us know at support@carbide3d.com and we’ll do our best to work it out w/ you.

As far as tightening up that is subjective. The wrenches are offset and by having each wrench turned in the opposite direction you can get them close together so the final tightening is done with one hand. Using one hand helps ensure you do not over tighten the nut. Each person has different hand strength and again the tightness is subjective. If you are 6’9" 300+ pound body builder you have a little more hand strength than a 5’ 100 pound person. However the mechanical design of the collet nut is such that the fine threads and amount of thread engagement it would be very hard to over tighten the collet to the point of stripping the threads

The best advise about tightening is tighten enough so your bit does not slip. If you are having a hard time loosening the collet nut you are likely over tightening.

On my Dewalt I use a 4" long wrench to tighten my collet along with the locking button. I have never had a bit slip. On the C3D routers the stop button is suggested to only be used to initially tighten up the bit so it does not fall out and then use the two wrenches to tighten. The cheap sheet metal wrenches can be frustrating to use so maybe buy some quality thin wrenches to have a better feel for your hand.

I do not know of any torque specification for the collet and even if they had one finding an affordable torque wrench and then using it would be hard and likely not used. So do not tighten up gorilla tight but only monkey tight. I know that is subjective but do not tighten up as tight as you can get it. A good final squeeze is all that is needed not all you have and then more.

Wow! Great information and so well said. Thanks. I have a better sense of this now. I’ll let you know how your suggestions work out for me.

Your suggestions as well as Wil Adams’ have helped with my issue with the collets. Thank you!

Not that it matters in this situation, but my old Tree 2UV Knee Mill used an automatic collet closer that didn’t use wrenches… 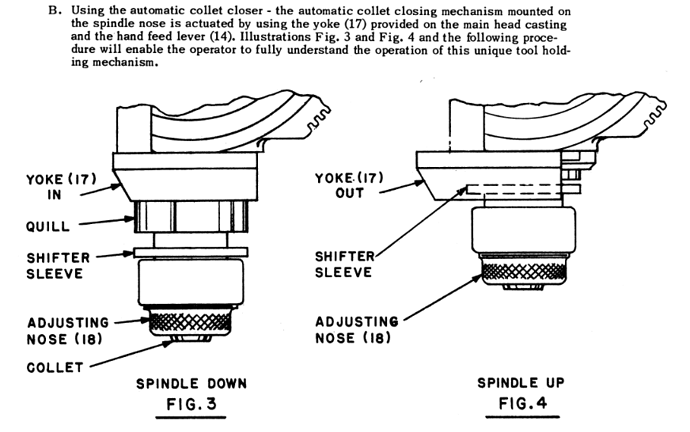 What I should have said was that I was not aware of any collet and nut system that does not require 2 wrenches in the desktop class. I did forget about the Mafell quick change system that @WillAdams mentioned. I use a couple tool holding systems at work that don’t use wrenches.