It was quite interesting to see how you guys used the “you can post multiple entries” rule for this 10th challenge!

Note: @duexx I could not validate your entry this time as the design file is missing. I don’t want any drama so I’ll stick with the rules 100%, sorry.

Yes people and preferably for me - ahahahahahah

Good luck to my fellow contestants !!

Remember if you / we / i do not win, our work here will inspire others. Most importantly it will keep us pushing our creative thinking!!

Just don’t bother voting for me. I have no need for any of the prizes (or, really, risk of winning). Said up front, just entering to stimulate the competition.

Future astronaut (He’s taking me with him…in case of space monsters) wasn’t happy that his sister’s butterfly lamp was winning. I promised I’d try to do something about it. Shameless, I know, but I made this little guy a promise. 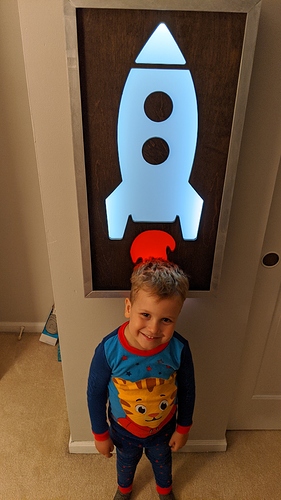 @neilferreri Remind this little champ that while a butterfly “can fly” only a rocket can fly to the moon!! -

Also it may be just the angle , but is that the classic CNC machinist stance i am observing here, there is promise in this young man i am sure.

Normally i like to be positive, and i would like to say it will ease with time but it does not, i still can’t look at my sister in the eye when talking about cakes, as she beat me in a cup cake competition in 1982!

Vote for the future machinist people!

Final reminder to double-check the format of your entries! Tonight at midnight I will put on my compliance officer cap and check everything

Lol when do you ever take it off ?

Ok, it’s a landslide victory for @neilferreri’s kids, and since we don’t want any family drama, I say they BOTH climb on the highest step of the podium together, holding their rocket and butterfly lamp for the cheering crowd to see !

Second place happens to a draw, but I wanted to go with Nils for jury’s prize anyway, so:

Second place goes to @PhilG, because…it floats ! Very nice example of a “serious” project and how the Nomad can help. I blame you and @enl_public (and many others) for my severe case of Nomad3 envy.

Jury’s prize goes to @nlichtenberg, for originality (and bringing back childhood memories of the 8-bit era)

Special mention to @Sherpa, for getting out of the comfort zone boldly like he did. At the pace he’s going on the learning path, he will probably win a couple of those challenges in the near future anyway.

Thanks everyone, hopefully this will have shown that cutting plastics is easy and fun (when in doubt feed faster, if that doesn’t work feed fasterer)

@Jorge will be in touch

I will kick off challenge #11 momentarily!

Congratulations everyone that was good fun! Not been energised by a contest in years I think my hyper competitive streak from rugby is coming back lol. And thanks for @Julien for the effort to do this . And Carbide 3d for putting up the swag.

Agree with @Sherpa and thanks @Julien. I was afraid of ruining my bits with some melted stuff but now I’m happy to have one more material type in my repertoire!

Thanks @Julien and Carbide3D! Was really pumped to see so many cool ‘make things work’ style projects this time around from @bpk9p4, @enl_public, @RoughDraft40, et al. I am not the most artistic minded so there is no way I am keeping up with the likes of @neilferreri or @nlichtenberg.

Now waiting to see what amazing things the heavyweights will bring to the table should there be a ‘milling aluminum’ contest!

Thanks guys! It was fun to involve my kids in this. It was also nice to be able to enter a contest again because I could easily justify the time. (I still tend to work 8 minutes at a time or after everyone else is in bed). I make a lot for them and they’re too little to understand the effort. For some reason these lamps resonated with them. Makes the effort even more worth it.
@Julien, thanks again for running these. It was really cool to see the variety given just a material constraint.
Awesome projects!
@enl_public I try to do more in Fusion these days, but I enjoy those Inventor projects. I still struggle with assemblies in Fusion. I’d love to just be able to “mate” or “flush”.
@PhilG AWESOME project!
@Sherpa Thanks for sharing your acrylic adventure. You definitely dragged some of us down the impossible “perfect finish” path.

I try to do more in Fusion these days, but I enjoy those Inventor projects. I still struggle with assemblies in Fusion. I’d love to just be able to “mate” or “flush”.

Yes. Fusion has some-- deficiencies. You CAN do the operations through the joint tool, but it is more involved.

One of several reasons I don’t use Fusion much. Another: It took 15 min for Fusion to start up for me to check myself, and laggy as well. I think it is trying to update. 100% disk and 80% processor, 100% network, on a fast, beefy machine. (Memory commit is 35% and streamer is running, hence my thought of update.)

Have you looked at the web interface for Inventor?
My biggest issue with both is the versioning problems. My students will get whatever the latest update is at home, but the schools will be well behind.
Fusion updates frequently, and we’re always having version issues at the school. Of course there won’t give me admin access and we have all kinds of issues updating.

Heads up- this is a long one

I have been working with CAD since the early 1980’s-ish. I have been teaching engineering and programming, and practicing as an engineer, for well over 30 years, though my scope of practice has shifted a fair bit= I initially was in semiconductor design/fab. Since the mid 1990’s, better than half of my professional life has been teaching. I currently teach (over the course of a year) introductory engineering (CAD/CAM is a large part), as well as introductory programming and data structures, physics, and multivariable calculus, and am the welding engineer (as well as safety, other engineering) for a marine contractor specializing in structural and steam plant repair. I have lead an interesting life to get here.

Inventor versioning isn’t that big of an issue, overall. For lockdown/remote teaching this year, I, fortunately, had 2020 on my machine, as I updated my ed license a year ago june. If circumstances continue, the support personnel, as of may, said that it will be addressed for education licenses. It hasn’t been an issue for the professional license, if you care to pay for it (mine is paid for by the employer, but only features we need. For hobby work, I use the ed license. For paid work, the pro. Different computers are involved to keep a clear line and avoid liability issues)

Fusion versioning is just annoying, as the updates come with no warning, seem to be asynchronous (so you may not get it for a while), and the process is SLLLLOOOOOWWWWW. Fusion is just a pain. The feature changes, resource sucking, and so on. Yet, existing bugs, and existing half-implemented features remain unaddressed. For a hobby user, it is a very, very powerful tool that beats pretty much anything else at the free or inexpensive price point. For the ed market, the bugs, lag, hangups, and partial features are a detriment. I won’t touch it in my professional life, and don’t know anyone that will in the world I work in.

One benefit: It runs on hardware Inventor won’t. Given the choice, Inventor all of the way. It isn’t always a viable option, though. (I would also like to be able to address Autocad with students, especially the civil engineering edition, but time is what it is.)

Perspective:
I had a single student this spring that had no machine available that could run inventor. He used Fusion. A couple borrowed hardware (gotta thank the local community for this- several local businesses really helped here) but this kid couldn’t get anything that would support inventor. The machine would run Fusion, though, so he went with that. The differences in capability were very apparent.

Rough number: 15 hours per week making curriculum. Normally I would have the students, in class, using measuring tools, making sketches themselves on paper, doing the models in Inventor and detailing them, then doing drawings in Inventor. The same general workflow as typical in the real world when dealing with existing parts (I work there, don’t tell me that isn’t how it is. A couple years ago I handed a parent that knew better an RFQ I dealt with, because he knew better. He shut up. The best is when a client or vendor sends only an autocad or inventor model, rather than drawings. That doesn’t match the physical artifact. Especially when that artifact is a 320m long container ship. Fun times)

I had to cover the first two steps-measure and sketch-, as well as provide instruction for the software tools, in written and video form. There really isn’t a lot out there that is good. Most of the official material covers single tools so narrowly that they are not useful for a beginning student, and much of the rest teaches really bad habits (make a sketch and include every feature with fixed dimension, rather than treat the features independently- like it will be made- and use appropriate relationships and parameters). If correct, robust, models are going to be made, you need to do it right (“Oh, we need a fixture for that turbine rotor as well. You should be able to get that done by lunch, right?” is something I have been told. Ya. There’s no difference between a 100KW and 40MW turbine… Right… ) So, I wrote roughly 800 pages (with images) and 40 hours of video, none of which I have rights to.

I spent another ten hours redoing everything for Fusion, and had to cut out some key tools and skills, as fusion doesn’t support them. For example, making detail views in drawings (fusion only supports circular fences) and modelling helical features. Fairly basic tools, but nonexistant or barely functional. I will give fusion the selection to actually model the thread as a feature (inventor doesn’t do this) which is really handy for 3D printing. It would be nice if Inventor had this.

All of that said, I prefer SolidWorks. But that is not seen in the real world for interchange, and not really practical for the education side due to cost and entrenchment. Autodesk got the ed market many years ago the same way that drug dealers get clients. The products are generally satisfactory enough that better products don’t displace them, and the company seems to know this, but also seems to know that they have to keep at it.

I will give fusion the selection to actually model the thread as a feature (inventor doesn’t do this) which is really handy for 3D printing. It would be nice if Inventor had this.

Agreed. The lack of the same coil capabilities is frustrating.

I will kick off challenge #11 momentarily!

We’re turning blue here Julien! However, it is nice having a break

Momentarily may not have been the right word here