Hi guys,
So I have never made or used a texture before with CNC. I learned a ton of valuable info from working on this including important stuff like how small I can go and how much is too much lol.
So I always admired the C3D logo, I prefer symmetrical construction and have done detailed Hexagonal structures before for video games.
Game design limitations included how many surfaces would be visible in one view, and you had to get creative and put up blocking walls and other various methods to reduce visible surfaces, they did not have the haze effect back then.
I was building the secret levels for a PC game called Malice which was a add on for the game Quake back in 97, and I built a hexagonal hospital that was way over the limit on visible surfaces but it was so cool, I asked John Carmack whom I had met previously, to help me out and raise the surface limit in the next version of the Quake game engine. To my surprise he said yes and gave me a beta version to work with until the game was published then released the updated version to the public. I was able to finish the level without shredding all the surfaces and in the finished game my hospital level had the most detail and surface count published to date and the game won awards and was a success!
Flash forward 23 years later, still did not learn my lesson and here I am building stuff that is way over the limit and I have no business trying to make lol, and I had no idea what I was getting into when I hit the generate tool path button.
I used 1 inch hexagons with the logo inside and some spherical additions. The plan was to cut it out with MDF first and then if everything went right, go on to Oak. I wanted a cool 3d effect and decided to play around with some sketches to compliment the design of the texture, and do a overlay trace.
So I started with a Carbide 3d tribute plaque with 7 of the textures in the center, with the intention of engraving it after it was done, and then designed a second simple platter with 64 hexagons on the base.
After attempting to generate both on one machine, a few hours went by and it was making literally no progress, I ended up splitting them up and starting over, generating one set of tool paths on my main computer and one on a different machine that my son in law downloaded fusion to.
To my dismay lol, the tribute plaque took 3 days to generate the tool paths on a i9-7900 with 32 gigs of ram. The larger platter is still going 5+ days later on a i7 with 24 gigs, and is halfway through the 3rd tool path out of 7. Legend has it, it will still be generating tool paths by the time the voting is done ha ha, but I am going to just let it run…
The C3D tribute plaque has over 24 hours of machine time. I really needed to turn the Shapeoko off it was running for days, so I just ended it slightly early. I still had a couple additional tool paths I wanted to run but was tired and needed to shut it down and not leave it on all night again.
The operation took so long I did not engrave the textures. The MDF is so smooth and clean I did not want to mar it up. I think it would work better trying to engrave it into hardwood but then the grain might take away from it. I could not highlight or paint the engravings in MDF and they are so small I don’t know if it would look good. After the excessive machine time I did not want to damage it with a bad trace carving.
I really do not know what to do with this MDF. I have watched tutorials on Youtube where you spray sealer on it but it requires sanding and finish work for painting and the components of the texture are so small it would ruin it if I touched it with any sand paper.
Just going to leave it raw for now…
The hexagon edges and outside spheres are .05, the divots are -.05, the center sphere is .075.
A few things I learned of note, you can not bevel a 1 mm edge. Even with a 1mm end mill. And when you are going this small you really need to have your axis’ses dialed in tight.
My Z has been coming up short and it was a huge pain to fix things afterwards on this when the tool paths take 8+ hours each to generate.
I used a ball mill successfully for the first time, I setup the outer ring so I could go inside edge to outside edge without hitting the floor and it made a perfectly smooth 1/4 rounded ring.
I had to use 1 MM end mills to clean up around the centers, and learned they do slot clearing on MDF no problem with a .05 step.
I also recently got 1/4 and 1/8 flat down cutting end mills that work amazing and make perfect edges.
If you download this and carve it (24+ hours lol) make sure to adjust the negative stock depth (-.05) and the negative axial stock to leave offset (-.04) that I have set to compensate for my Z issues. I can’t re do it to 0 and re-generate, it will take days.
Was thinking if anyone has experience and materials for painting or finishing raw MDF and was interested, I could ship it to you and you could finish it up and mail it off to C3D headquarters.
Good luck and can not wait to see the other entry’s! 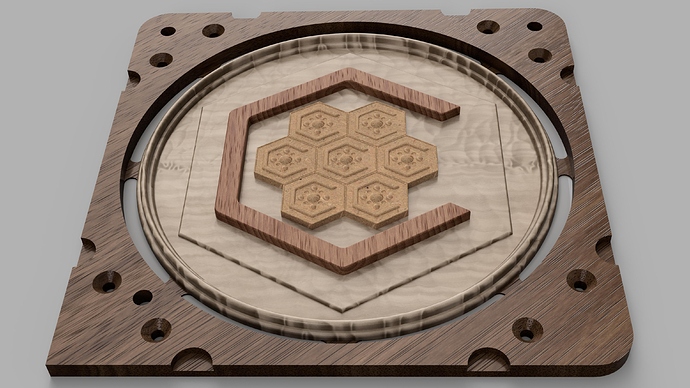 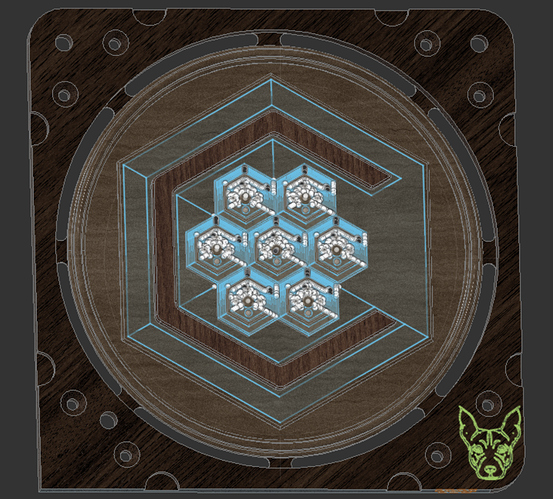 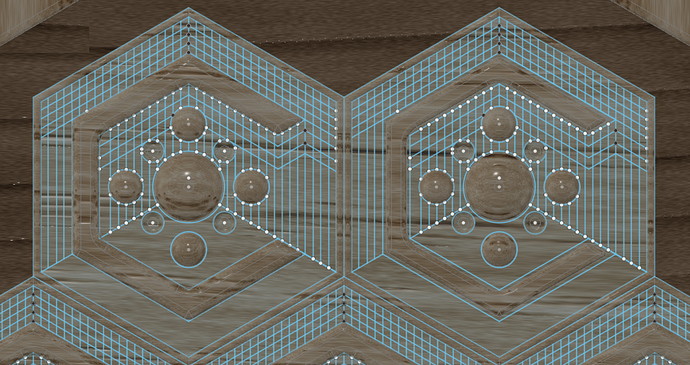 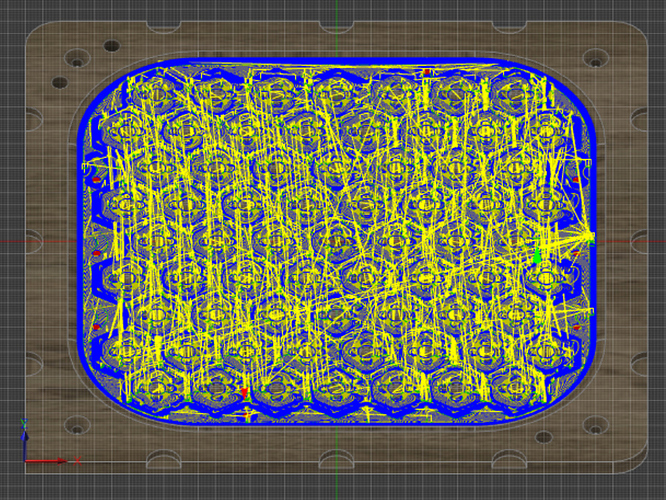 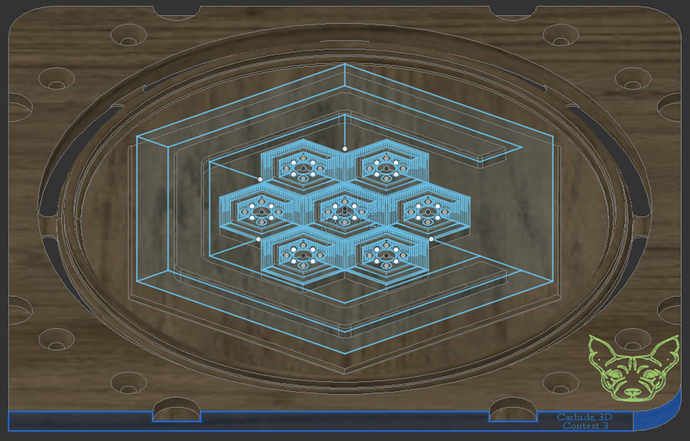 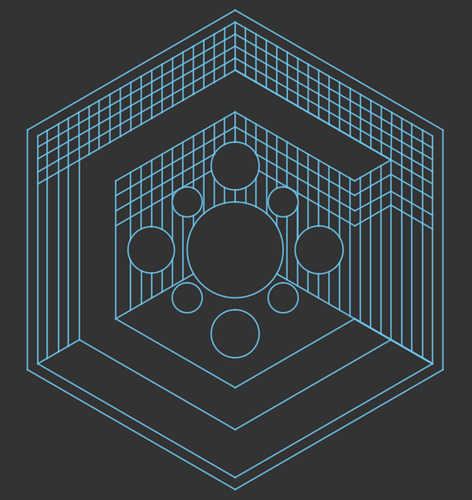 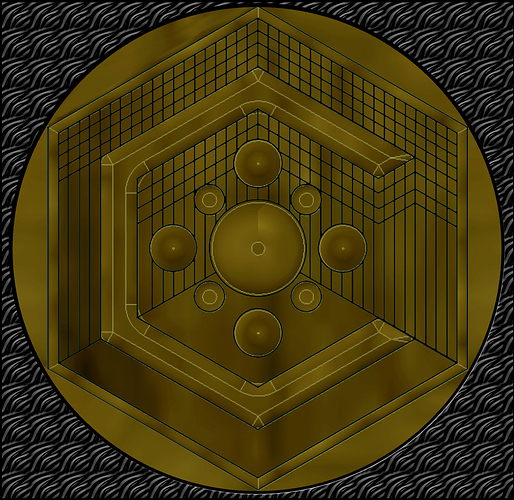 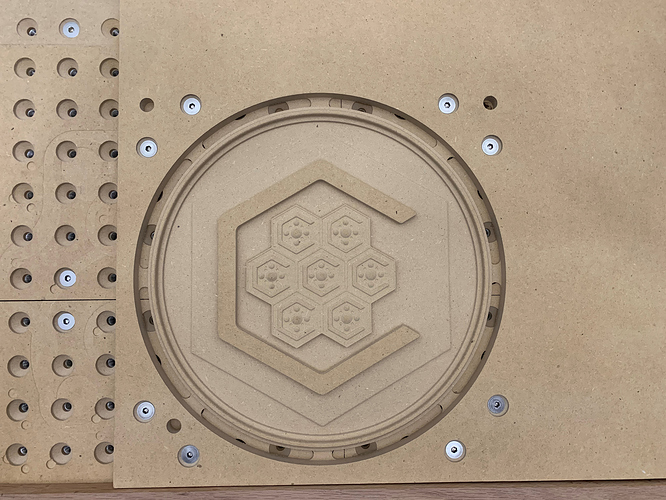 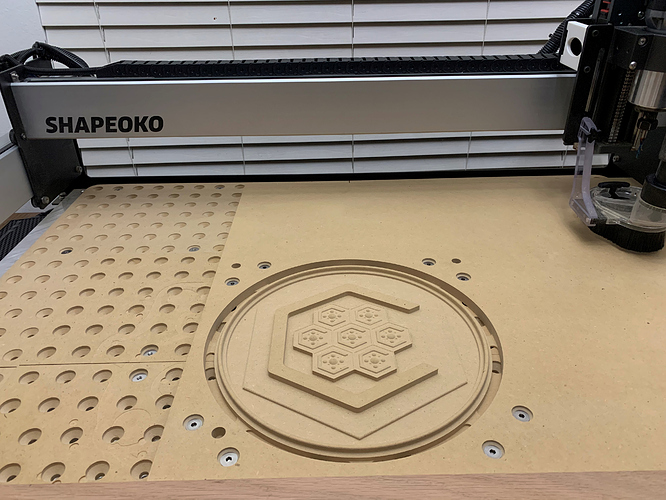 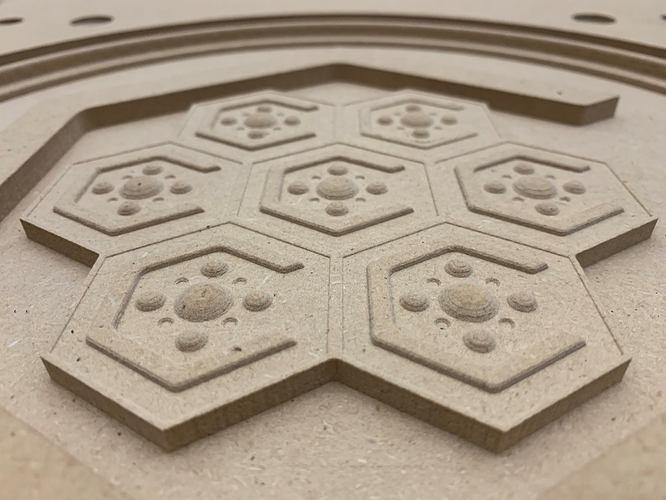 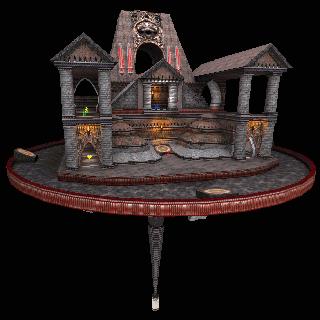 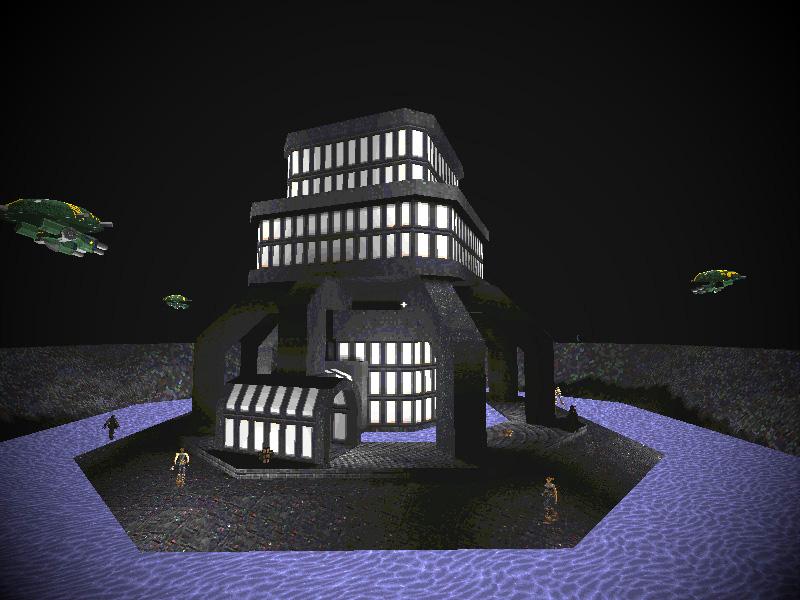 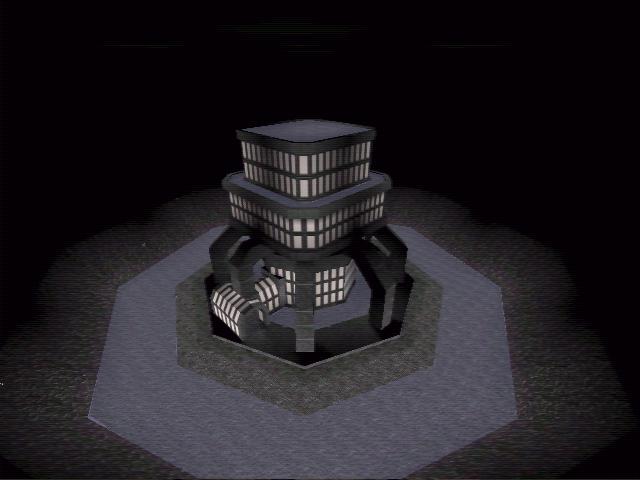 Thanks for the offer @CNCInspiration but now it’s been extended I should be able to get it done!

I don’t know if they allow it but I could carve it out for you if you send the files? I do not see anything in the rules about a surrogate Shapeoko lol

Since the timing of the challenge was brought up earlier anyway (and it is indeed a bit too short), and I want to get a few more entries, I’m extending the deadline to Jan 17th (and edited the first post accordingly) 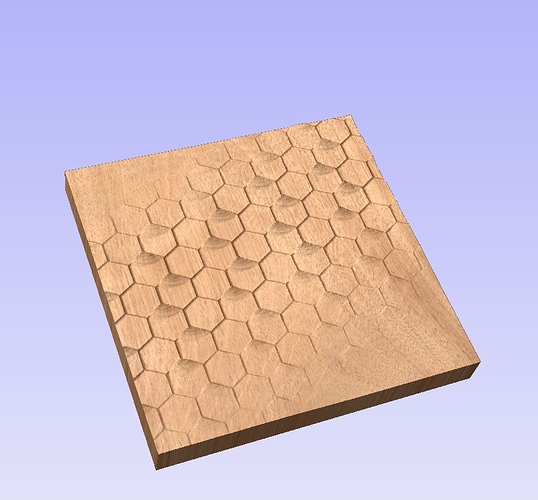 Funny we all are going with the Hexagon, Carbide 3D logo theme! I made mine last night.
I will add the details and files later, but here’s my entry.
I went full C3D texture. 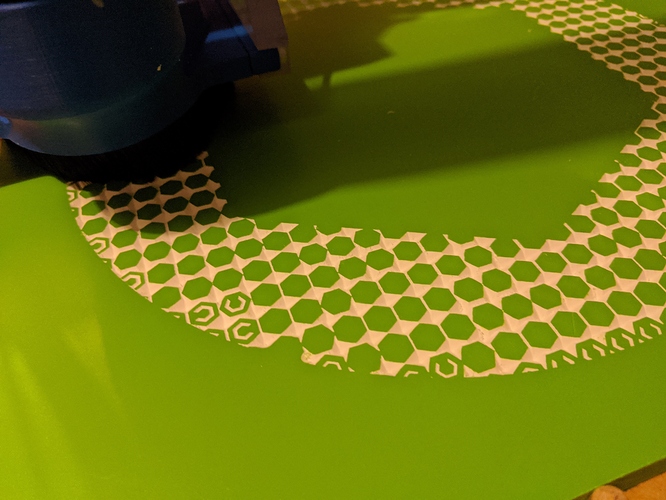 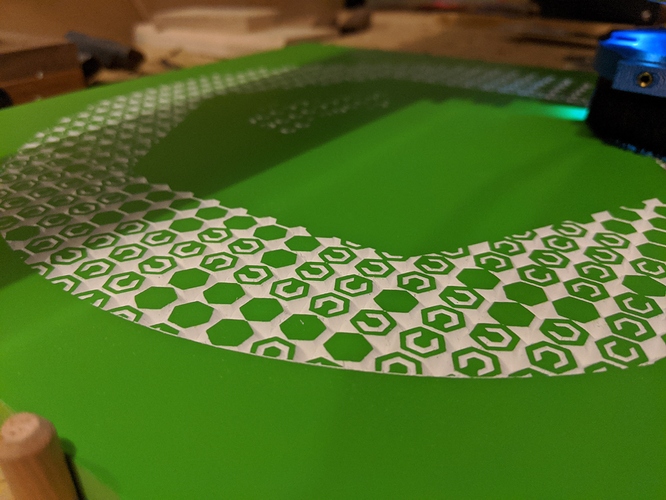 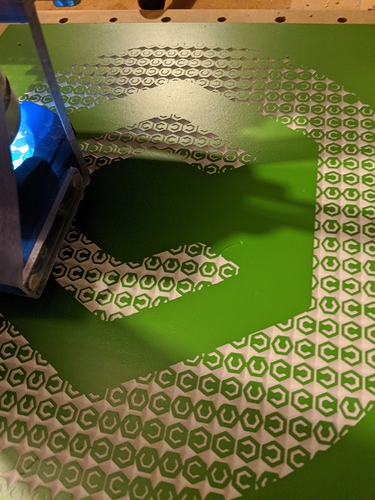 Then I decided to cut the profile:
(see if you can detect where things went wrong) 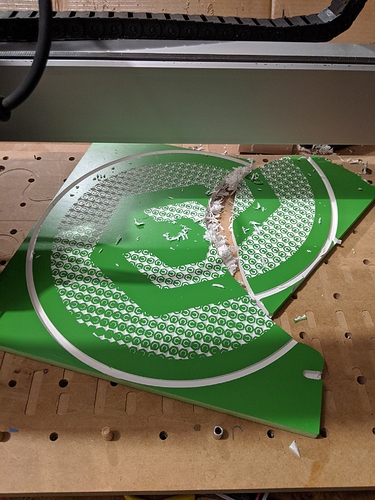 Process:
Design - Create vectors in Inkscape. I used a whole bunch of clones. I didn’t like the look of all of the mini logos facing the same way, so I unlinked the clones and spent time going through some “shuffling” to get them random-ish (@CNCInspiration). Basically I arranged them in a grid and started selecting random groups to stack. Then I stacked the stacks, messed with the layer order, arranged in a grid, and repeat until I liked the arrangement (read: got sick of my old PC not handling the vectors very well).
I had a fleeting thought to try this in Fusion 360…no way. Not with that many nodes.
I put it in V-Carve, did some more editing there. I’m not that familiar with V-carve, but it handled the vectors really well. The finished piece is 12.5" (about 320mm) in diameter.

Cut - Used double sided tape (not enough the first time) and a couple clamps (second time).
Used a 90deg V-bit for the Texture, 5mm flat depth (probably ends up closer to 3mm), 3000mm/min, Speed 4 on Dewalt. Eyeballed Z-zero. Came out really clean.
Profile was a 1/4" Upcut, like 4500mm/min, speed 2ish, originally took 5mm depth, but switched that to less on second run. The machine can easily handle the deeper cut in PVC, but my workholding was done poorly.

I was going to make it into a clock, but it looks so cool I didn’t want to put a hole in it (or jack it up again).

V-carve file and gcode C3D_texture.zip (2.7 MB)
Note - I used CNCjs and have an XL with a first gen HDZ 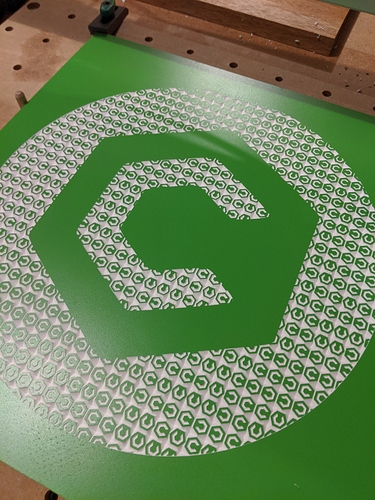 It fit in my little C3D phone stand! 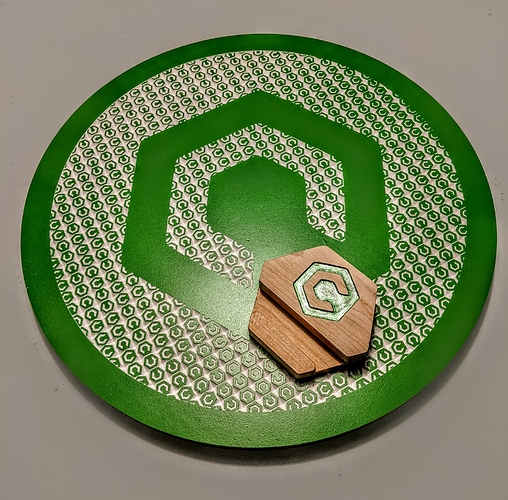 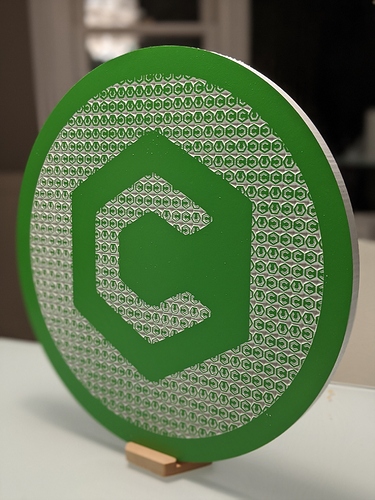 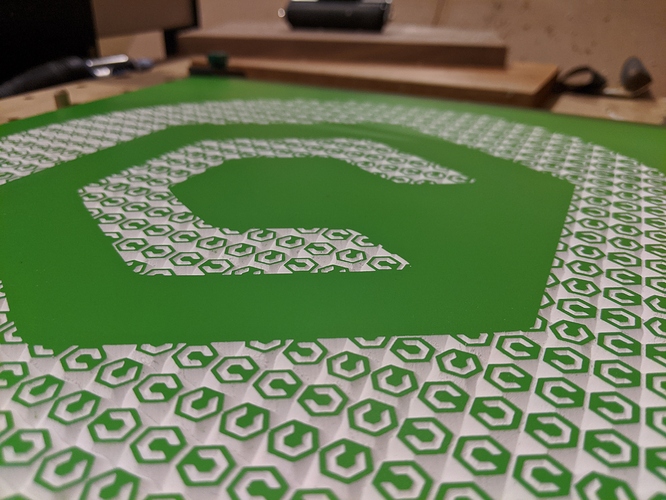 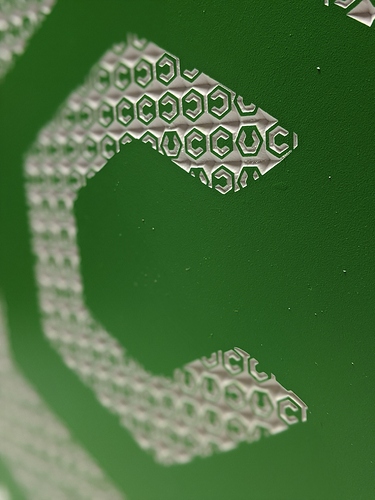 Don’t forget to attach the associated design file plz
EDIT: sorry did not see you mentioned you would add it later

Will do. I’m giving it a second attempt, and I’ll edit my post.

what material is this btw ?

I asked John Carmack whom I had met previously,

I am officially jealous. This brings back fond memories (of playing Quake, and of that period of time for PC gaming industry)

Very cool Neil, I love how they are facing all different directions. I played around with that and gave up trying to have all sides match. Is there a pattern or are they random?
Ohhh crap! Just watched the video Ouch! Like 10 seconds from being finished too…

Ohhh crap! Just watched the video Ouch! Like 10 seconds from being finished too…

The question is why I didn’t just put my phone down? I need a tripod… Not to film the cut, but to film me. That way I can analyze my pointless reactions.

That’s why you should always wear a belt AND suspenders!

Turned out great though😊

@Julien Updated (successful) entry along with details and project files in edited post above.

That’s really cool, seeing someone using the 3D capabilities in PhotoShop for CNC. I dont see it used for cnc that often.

Here is my first entry! More of a proof of concept than anything, It’s my first attempt at a 2-sided job, and with the modelling/texture features in Vectric Aspire.

I used 4x 8mm dowels to do the flip for the double sided machining - this was my first go at double sided and it worked almost flawlessly.

Link to Aspire 9.0 file is Here 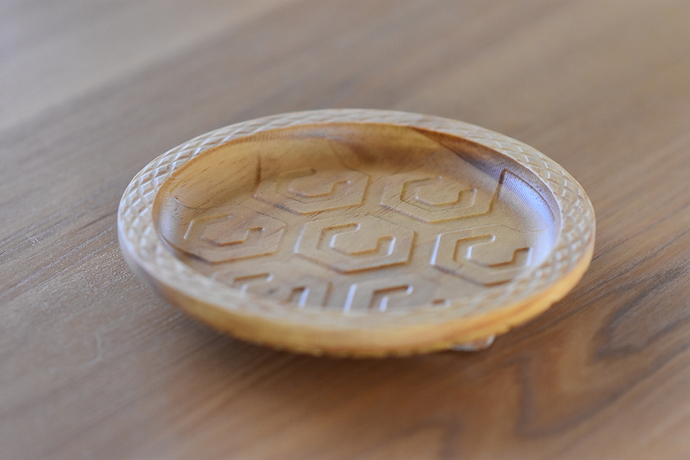 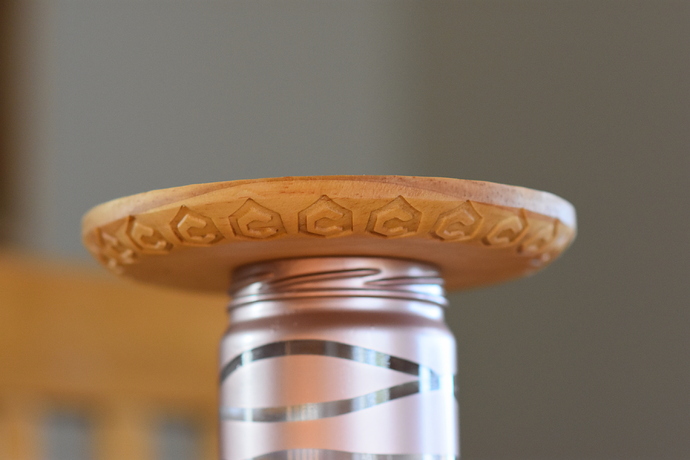 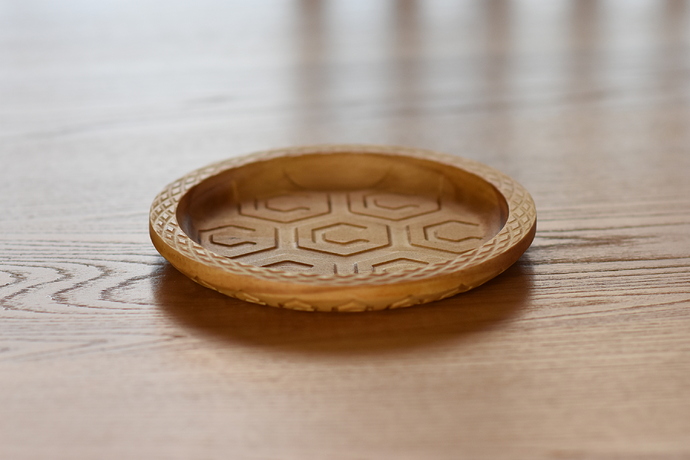