Now that 2019 and Community challenge #2 are behind us, let’s move on to our third challenge:

Texture toolpaths were introduced in Carbide Create quite some time ago, but I don’t see them being showcased very often, so here’s the opportunity to add a string to your bow (or is that only a French saying ?)

The rules for this third challenge are:

I think you will like the prizes for this challenge: Amana cutter packs! (which have been introduced recently on Carbide 3D’s store) 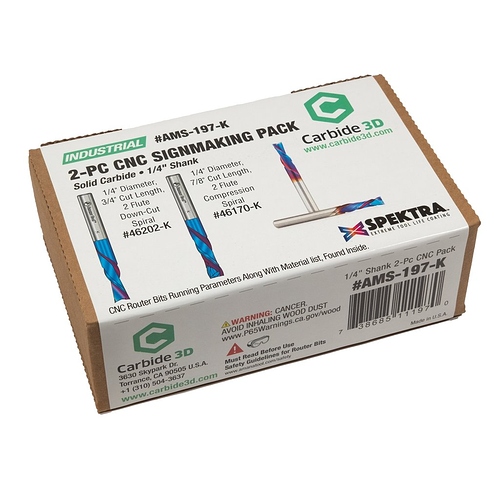 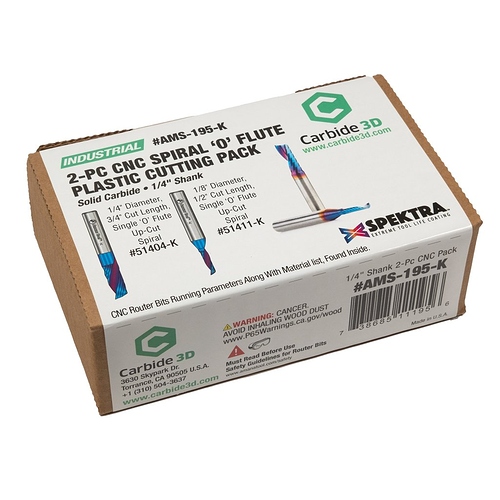 Downcut, compression, and single-flute endmills are awesome for their specific intended usecases 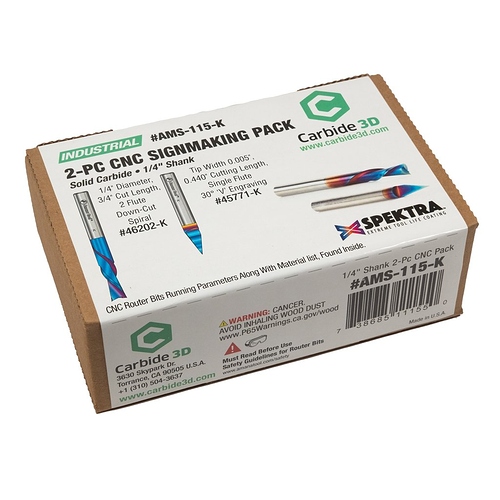 Let’s see what you can do with textures !

As an example of the sort of thing one can do with textures please see:

Note: I edited the rules, to not limit the projects to those made with CC. There are multiple ways to do textures, so feel free to show us how you do them in alternate CAD/CAM packages !

Maybe this could be useful

I wasn’t expecting these challenges to be back to back (my thought was monthly). How many more challenges are to be expected, for the year? I’d love to participate but my Shapeoko is correctly disassembled and probably will be non-functional for a little while

There are 4 more challenges planned after this one, for now.
I’ll check with @Jorge about maybe adjusting the schedule a bit.

I have missed a few too, the prizes are epic! I do rostered work away from home and have been gutted to miss the last few!

I hope this is long term, i love the concept and love seeing what people come up with!

Might have to get the wife to get into the competitions while I’m away!

Textures can make a huge difference to a project and the inbuilt textures carbide create offers are great ways to make any project pop. From signs to clocks, it’s amazing how it can impact a project and offset it. If you haven’t used them you should have a go, and if you have well… time to enter

To get the ball rolling here is one and not an actual entry. Here was one I quite enjoyed doing. Knurling on the inside of a tapered hole for a ER20 collet set.

Very nice Luke! I have no idea how you did it, a side cutting bit?

Is the hole tapered? I am contemplating how to cut that with a flat end mill… Nope!

I get it , Lukes new 5th Axis design being tested! Works great!

Just finished a quick entry. Likely going to try my hand at another design, but figured this would at least get things started.
I wanted to have a different direction featured so the center and outside run one direction and the inside runs the other way. I had gaps between the features to provide some stability for any drinks. 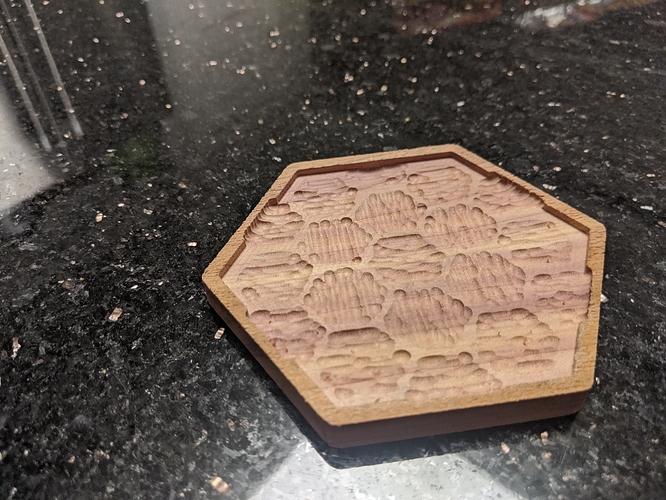 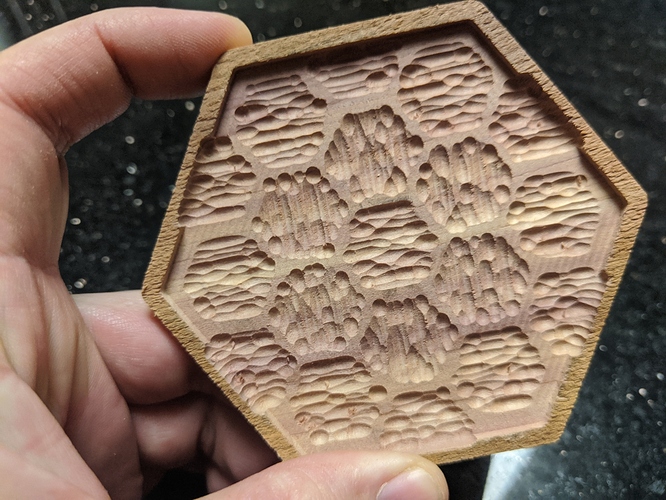 File from carbide create has been uploaded. I recommend not using the brim. I didn’t realize that the texture tool path would go past boundaries.coaster file.c2d (124.6 KB)

For some reason I have a thing for hexagons, they just look cool. And it vaguely reminds me of some company logo

Tricks to manage the boundaries will indeed be part of the game when using textures.
Thanks for you entry @Radiation !

When I was experimenting with textures, I found it necessary to do a Boolean operation to trim them along any features I wished to preserve.

Perhaps create an internally offset vector just for the texture.

I saw these and immediately thought about Settlers of Catan. Would make for a nice, custom set of tiles.

A coat hanger from Oak. Made in V-Carve Desktop with a .25" ball for the texture. I hid the mounting holes behind the hooks. I also french pollished it to death, looks kinda like a layer of ice in person.
Stained with pecan and glazed for the “dirty” effect.
price_hanger_01_challenge.crv.zip (448.8 KB) 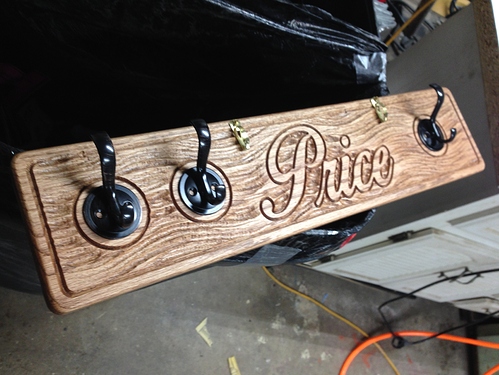 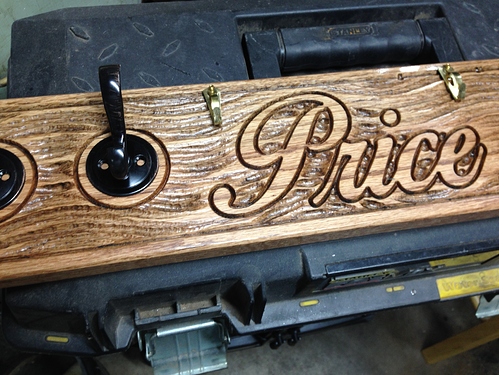 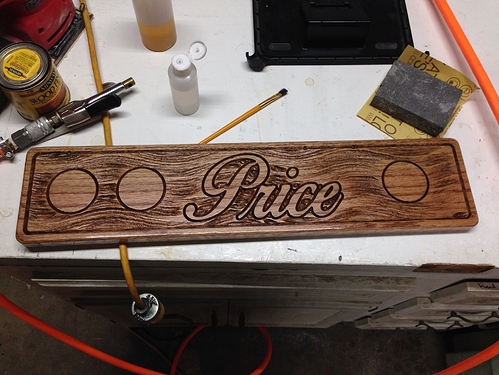 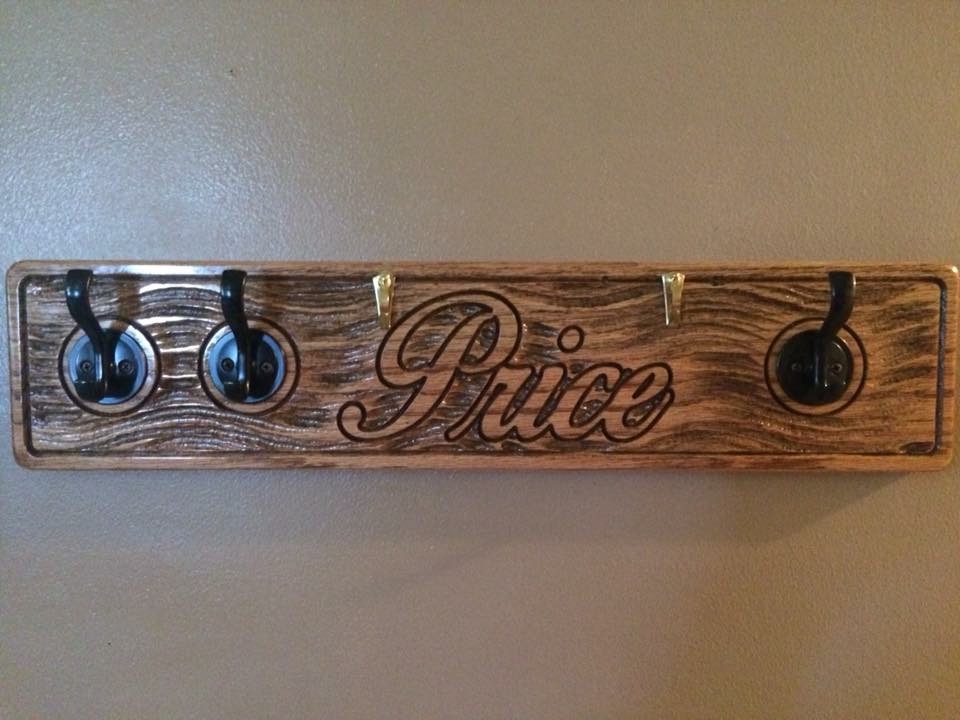 Here is a Textured trivet I adjusted in adobe illustrator, then into photoshop to adj for a grayscale conversion to a STL using https://imagetostl.com/

I used a .5mm taper ball endmill on a piece of walnut. 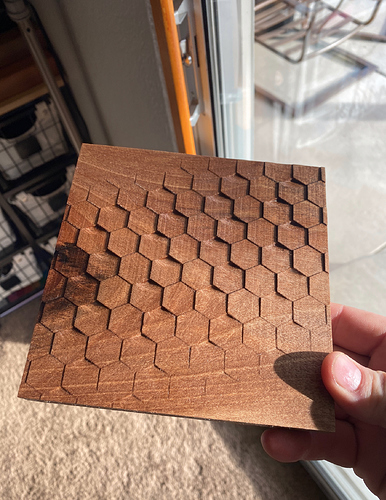 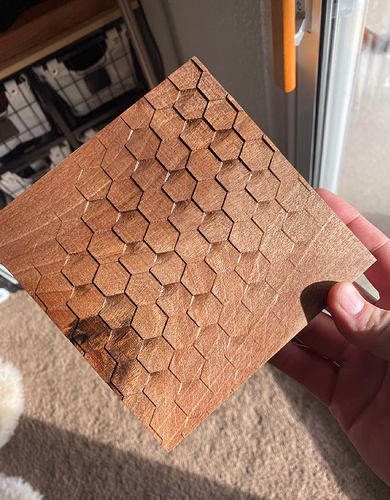 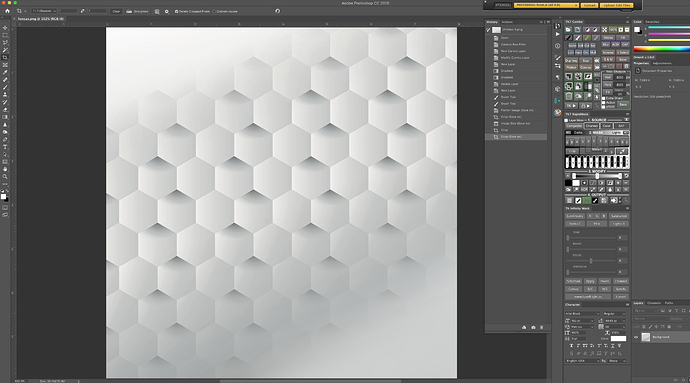 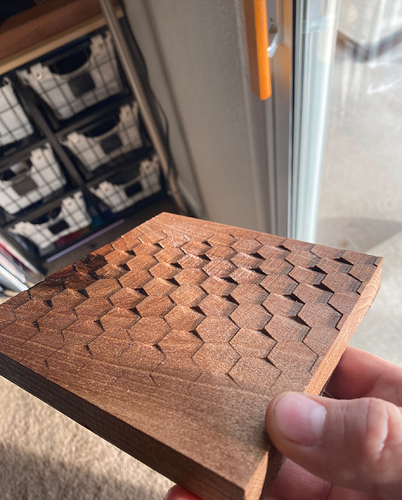