Controll machine after designing on ipad pro with shapr3d?

Just ordered a Pro XXL, been reading alot on here about hardware/software. My problem is i don’t really understand computer lingo. I did go to college and learned CNC programming and g-code, but that was like 35 years ago, and i left the trade 27 years ago.
I recently got the free version of Shapr3d and learn to design on it. I really like using the apple pencil.
So i have an ipad pro for the shapr3d design work. And it sounds like a windows tablet would be ideal to run the machine as it has no fans and they are inexpensive.
What I’m trying to wrap my head around is taking a design from my ipad and exporting (?) it to the windows tablet to run the machine.

Yes, this works, and we have a lot of folks who do this.

You need to export the STL from Shapr3D, then use a 3D CAM tool to make G-code — MeshCAM is one which we support:

GRZ Software makes CNC software for non-machinists. You can try our software for free for 30 days- no limitations!

Ok, so meshcam would install to the windows device, then export the design from ipad to windows and meshcam makes the g-code to run the router.

Now, if i change over to a windows notebook with touchscreen and pen, then i can use shapr3d to design and run router with one device. With this scenario, can i use carbide motion? Or does CM only work with carbide create? Forcing me to go with meshcam?

Carbide Motion will accept pretty much any G-code.

Yes, you can design in Shapr3D on a Windows tablet, export STL, import STL into MeshCAM, set up toolpaths, then write out G-code, then use Carbide Motion to send it to the machine.

There are a couple of different sorts of apps:

You would export STL from Shapr3D, then import STL into MeshCAM.

Thanks for your time on this.
So once the STL has been imported to meshcam on the windows device, it somehow goes to or through CM to run the router.

Nope, not that easy.
Once in Meshcam, you then have to develop your cutting strategies, generate the toolpaths, and then export a gcode file. Once you have the gcode file saved, you then open up Carbide motion, and open the gcode file in that. I would recommend cutting air first to verify you have everything correct.

Once you load things into MeshCAM, as @Steve.Mc notes, you will need to work up toolpaths, then save those to a .nc (G-code) file and then send them to the machine.

We bundle MeshCAM w/ the Nomad, so the tutorial for that may help:

Im now rethinking, wondering if just ditching shapr3d and learning CC will be a simpler path to success.

MeshCAM is really easy to use — if Shapr3D is suited to the sort of design work you wish to do, and exporting an STL to use to cut, it really doesn’t get any simpler — the only exception might be Alibre Atom3D Workshop (which integrates MeshCAM).

So if i design a cabinet in shapr3d, then can I import the parts to CCPro and run them with CM? Avoiding meshcam? (Avoiding meshcam for the purpose of minimizing software i have to purchase)

I think Will might have missed a few steps when he said “and it has support for free-form 3D shapes which would have to be imported into Carbide Create Pro”. You would have to convert you designs into greyscale heightmap images first.

I think you should have a look at Fusion360 or Aspire where you can design in a tool that can also create toolpaths.

edit: I would add that exporting a cabinet designs as STLs (for import into something like MeshCam) is probably not the right approach. You need to design the cabinet in a way it can be cut and assembled as multiple pieces, so it’s probably more often about assembling many “2D shapes with depth” (ie: 2.5D) rather than producing complete 3D models you “print” on your CNC (which is not going to work).

My apologies — left out a bit of text in my (now edited) initial reply.

Shapr3D is a full-fledged 3D CAD tool — it is suited to mechanical assemblies and parts which interact, and it has support for free-form 3D shapes which would have to be imported into Carbide Create Pro

Shapr3D is a full-fledged 3D CAD tool — it is suited to mechanical assemblies and parts which interact, and it has support for free-form 3D shapes which would have to be imported into MeshCAM. Only 2D DXFs can be directly imported into Carbide Create Pro

As @Gerry pointed out.

Free-form 3D as STLs can be imported into MeshCAM.

You should learn MeshCAM if you wish to do free-form 3D — it’s really simple.

So if i design a cabinet in shapr3d, then can I import the parts to CCPro and run them with CM?

Yes, except for cabinets you shouldn’t need CC Pro, Just CC (amateur) should work.
I’m not familiar with shapr3d, but if you can design your cabinets as an assembly of individual flat parts, and then export each part as a dxf, or even dwg, convert that to svg & import into CC.

Although it may be quicker to just draw them up in CC. It’s really simple & fast for this kind of work.

Of course, I’m imagining something like custom size kitchen cabinets. Unless you mean something different. A cabinet side is a rectangle, with a subtracted rectangle (toe kick), and a slot.

Honestly, I think I could build them faster with a table saw & hand tools. Taking into account your programming & setup time on the machine for each individual piece. Maybe using the machine for door panels if you don’t have a shaper.

So if i design a cabinet

Honestly, I think I could build them faster with a table saw & hand tools.

If you get a new hammer, everything starts looking like a nail!

Yes, I know that phrase is old and worn out, but a CNC controlled router is not a workshop in itself. I don’t see how I could make anything without all the other tools that I have.

As a person whose only regularly used power tools are CNCs, I really think there’s a lot of potential yet to be explored — esp. in the concept of joinery.

Current project is lining a closet in cedar — being able to use the CNC to cut all the parts is going to allow for much more efficient use of material.

Agreed, and if i was building a typical box cabinet it would be done by hand. I have done that for years. The “cabinets” im building is really a drawer system for a JDM camper van. There are lots of details in the components that the cnc could do much faster. Ill attach the design so you will see. In addition to the drawers system, i want to machine some 3d topography maps, thats why im considering CCpro. Funds are limited, so trying to figure out the most efficient use of $ to spend on software.
If i design in shaper3d, then have to manually redesign each piece in CC, ive kind of missed the point of efficient workflow. 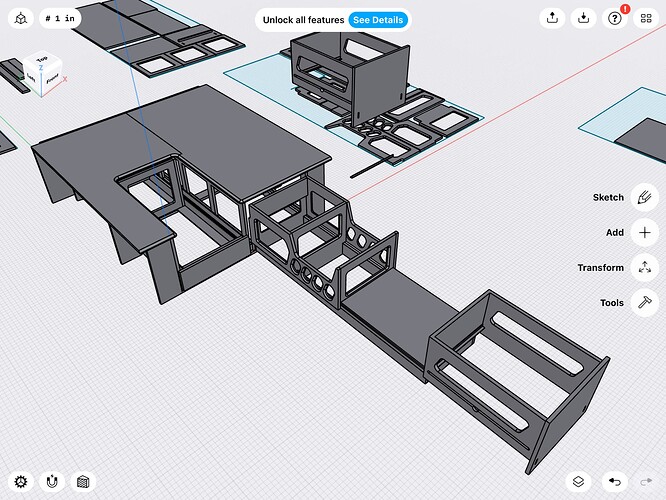