Create an "Opt Out" for warning messages

Re: Two discussions:
Here
and Here

Request: Add a checkbox that says “Do Not Show Again” to the warning dialogs to allow the user to no longer be interrupted by that particular message.

There have been a few new “protect yourself” warning messages showing up in CM, which require additional clicks when they are displayed. Please provide checkboxes on the warning message dialogs to “Do Not Show Again”. Once checked, CM would no longer stop at that point and display the warning / confirmation messages.

This opt-out option would be individually and independently available for the following messages:

Most applications which implement this Opt Out feature have a way to reset the flag so that the warning messages are once again visible. They usually do not reset each of the messages individually, they usually have an option to reset all of them at the same time. This could be a single click on the Settings Screen.

This is what Photoshop does:
Each warning message has a checkbox like this one: 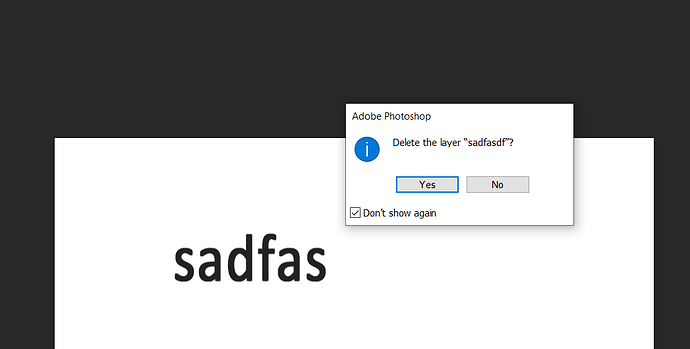 Then, in the preferences dialog, they can be reset like this: 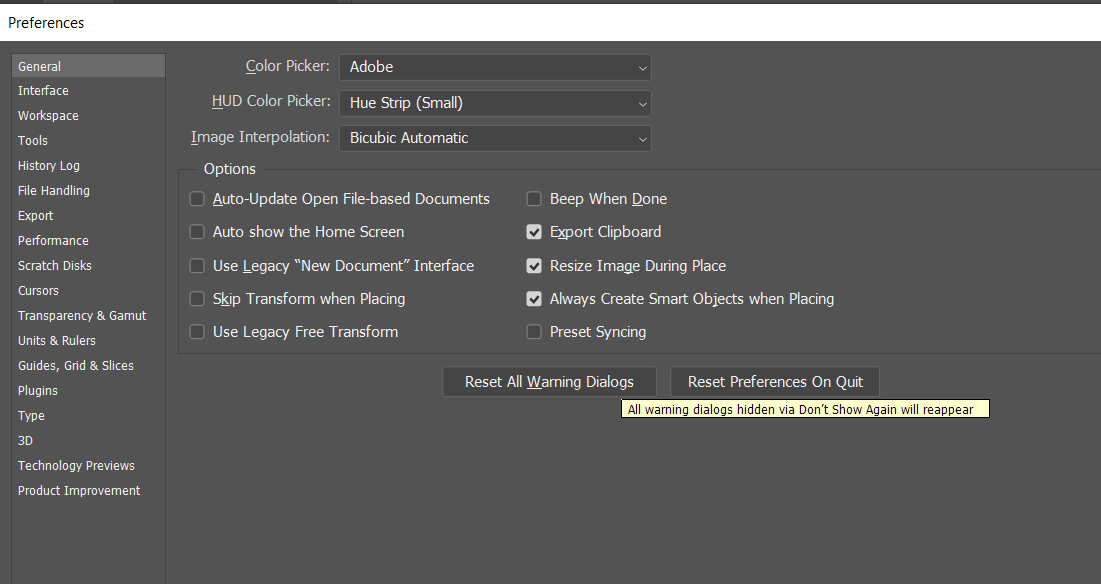 When you click “Reset all warning dialogs” it shows:

I’d add that if this “reset all warnings” model introduces too much complexity, or in the case that we’re afraid people who do NEED the warnings will hide them too often… then maybe a simple boolean checkbox under “settings” which says just “suppress warnings, yes I understand” might work as well.

Well…the issue may be that some dialogs are necessary and others aren’t - and that is a very personal preference. The suppression is on a msg by msg basis (there aren’t that many of them), but the reset can be for all at once.

I seen one guy on YouTube using a drag engraving tool to etch a aluminum cup, his router was turning at full speed !!

So I understand why they are there

@Mogsy As do I…that’s why I’m making the suggestion that I am making: Every message is shown at least once. If the user doesn’t need it, they can turn it off…but if they want it, they leave it alone and it continues to show. This is decided on a message by message basis by the user. There is no option to blindly turn off all messages - as that could lead to someone accidentally turning off a msg that might have been valuable to them.

Just like the disclaimer below, some times it’s need for carbide to CYA
Some crazy people out there who are sue happy
I read one lady sued the motor home company cause she left the driving seat to go make a coffee, and as it was not in the brochure not to do that I think she won the case

For the legally-obsessed out there, the Shapeoko, Carbide Compact Router, and cutter shown in the photo are not included with the Z-Plus. But you already knew that.

So each message is displayed and the user has to make a conscious decision to turn it off in the future. CYA-City!

The check box could even say, “I don’t want to see this message again and I know that I’m responsible for any mishaps due to my turning this warning off”

What is the “quick actions” screen? I feel like I know CM pretty well but I don’t know this reference.

It was recently added, see:

@snakeoil Quick Actions is a new screen added in the beta of Carbide Motion…You won’t see it until you connect to a machine (and I don’t have one here), so I can’t show it to you right now. It’s basically a set of predefined GRBL macros and then the ability to add your own custom ones

EDIT: @WillAdams just pointed you to the beta…but there are no photos of the screen there. I’ll try to take some next time I’m at the machine.

The issue is, when you bring up the Quick Actions menu and select one of the quick actions to run it, an “are you sure?” message pops up ("how can you be so sure?..I’m positive! - for all you Cousin Vinny fans). It’s an extra click when you know what you’re doing.

That is really cool. I generally avoid betas but I’m excited about that!

With a lot of software, I do as well. But with CM and CC, I’ve been pretty happy with the stability of the betas. I enjoy trying to help software companies improve their products, so I’m happy to participate in the betas…plus, sometimes they’re implementing stuff I requested…so I want to get it as soon as possible.

In reference to this specifically I’ve been copy/pasting G-code to the MDI panel. Rapid to known points on a known machine, etc. It’s as if they read our minds…

The check box could even say, “I don’t want to see this message again and I know that I’m responsible for any mishaps due to my turning this warning off”

Except that nobody really wants to hear that it’s their fault. Believe me.

Maybe there’ll be a “CM Hacks” manual put out someday

@robgrz The more I use the new version the more annoying this becomes. I know I “grr agreed” above, but I think I’d like to lobby again to have SOME WAY of turning this thing off. It’s on me if I turn it off. Make it difficult to do, I don’t care. Considering there are nine likes already on this one, I’m not alone.

From my own commercial software experience, another thing that’s worth mentioning is that when users get comfortable with dismissing messages, they often end up dismissing the wrong message (dialog fatigue). They’re so used to getting rid of that repetive message that they’ve dismissed 1625 times and maybe read 6 times that it becomes instinct to dismiss all messages.

It also takes the weight out of future messaging. Users will pay even less attention than normal to future messages.