Cutting 1mm copper with SO3

Hi!
I have looked around the forum and looking for something useful for running copper in my SO3. I have 102-Z, 112-Z and 282-Z. I’m pretty sure any of these will work. I will cut out plaques that are engraved with a birthday greeting to a friend who turns 50 in a couple of weeks (attached picture), so it is no advanced operation.

Can anyone help me with starting values that do not destroy my bits, I don´t have time to wait for new ones to be sent from the USA to Sweden. 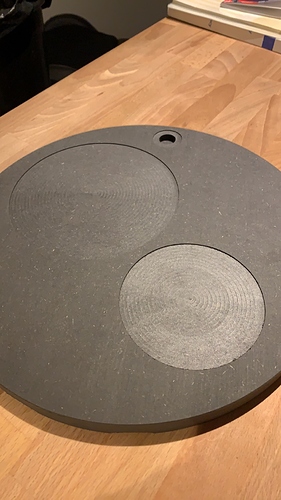 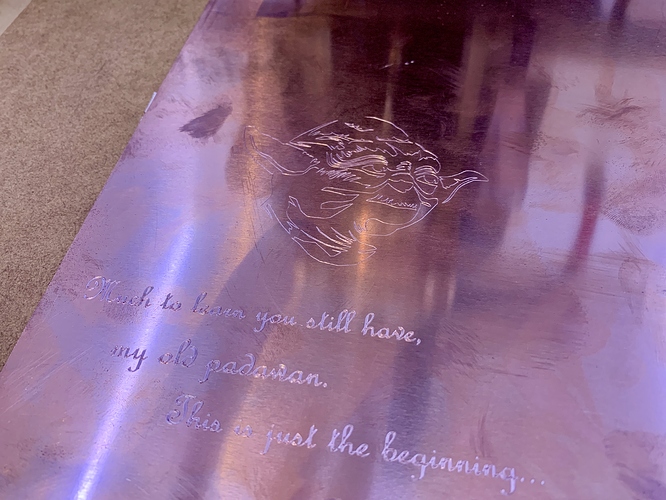 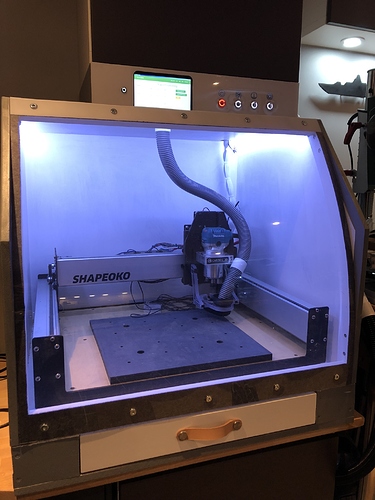 For the Nomad but see:

for some useful information.

I have looked at that video and its great. The problem is that I dont have the #122 bit

As a CNC owner, you need to have a good understanding of what SFM (Surface Feet per Minute) is, and how to determine the correct SFM for the material (alloy) that you what to machine based upon your available cutters.

What we do (machinist) is take a proven recipe (provided by Will’s post) for one cutter diameter/type and do a little math to determine the Speeds (Spindle) and Feeds for another size/type cutter. Don’t worry about about coatings at the beginning (they will only (90%) help is stopping sticky material (Aluminum, copper, etc) from sticking to the cutter, so just calculate the SFM based upon the size/geometry.

Please don’t expect for a recipe to be given for every cutter type and diameter, since you ONLY need ONE proven recipe…the rest is up to the machinist.

Advance class: Determine that that particular coating is and what are its advantage. (Lubrication, increased cutter life etc). and increase the SFM based upon these properties.

Ideally everything on this would be at:

but we’re still trying to put that together.

There’s been a lot of useful discussion on this sort of thing at:

and the community has some useful notes at:

Thanks Richard, it is good for us beginners that you machinist are helpful when we get stuck.

Just as when I started with 3D printing, beginners need to be pointed in the right direction, without necessarily getting a complete answer (which usually cannot be given anyway).

Some day maybe I can call myself a machinist and help other beginners get started with their hobby.

If it were me, I would think along these lines:

And finally, when you start the job, if you do not see nice tiny chips of copper flying, the endmill is probably melting/pushing material rather than cutting, and you should probably stop immediately, and reconsider the settings.

BUT, I am not at home so I would ideally also verify what G-wizard calculator has to say (and plug in the right copper type in there too), and TEST this myself before answering (I remember I did profile cuts in 1 mm copper a few months back, I would need to look up my settings), so take all of this with a grain of salt, I’m sure others with jump in to correct me if needed.

Also, what feeds and speeds does CarbideCreate come up with for this situation (102Z, copper) ?

If this is not urgent, I’ll test this over the week-end, I’m interested in the exercise to consolidate/correct my feeds & speeds approach/guidelines anyway. Just need to find where I stored my copper…

I will note that for a profile/perimeter cut one often wants to use a small endmill for a more accurate rendering of the outline — I had that to contend with in:

Many thanks, this is exactly what I need to understand in order to get this done. The biggest endmill for copper I have is actually 201Z, it probably won’t break. I’ll try to do the same calculation like you did for 102Z, do I need to use coolant during work? I have a dust boot and the Makita router.

Like everyone suggested, the 0.125 cutter would probably be your best choice. Even an axial doc of 0.010 isn’t going to stress it but 0.006 is decently conservative.

Didn’t see you mention what type of cam software you are using. With a straight plunge you have to be on the safe side compared to a ramping or helical action like Fusion 360.

You are holding the sheet down with superglue/tape method? Ive found on thin copper sheet one of the most important things was keeping it stuck down.

Im using the software that came with the shapeoko, Carbide Create and Carbide Motion. This is my first project (more or less) with my machine. Im using screws and to hold the sheet down, im pretty confident that it wont go anywhere. I will use tabs and cut out the piece with a dremel when im done, its not the best way but will have to do for now.

You’d be surprised how thin material can bow and move even with screws. With upcut bits your metal sheet will want to be pulled up and that can make some bad vibrations. With superglue/tape your whole sheet stays down and you don’t have to worry about it coming up or having to clean tabs later.

With Carbide Create I don’t see a copper material option but the default brass speeds and feeds look pretty ok for a Makita at 10k. You’ll have to manually double the feeds because its meant for a nomad.

That looks like a simple method, I will try it out even tough the sheet isn’t super-thin (1mm).
Is the values in Carbide Create made for the Nomad? Isn’t there any way to change that, sounds like a easy tweak…

I would not bother going to a 1/4" endmill, there is very, very, very little chance of breaking the 1/8" one with the conservative DOC value mentioned above. You can use a few drops/spray of WD40 if you want to be super cautious, but I think that is unnecessary, just cleaning the chips as you go should be enough.

CarbideCreate does not have Copper in its material list, but Brass is close enough and gives this: 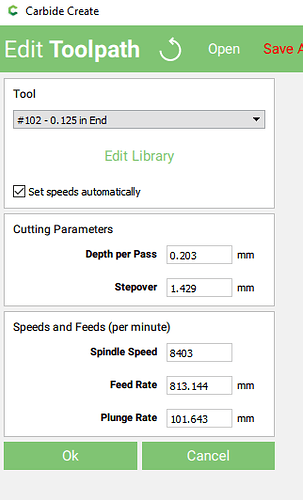 Since 8400 RPM is impossible to achieve on a Shapeoko+Makita (really, they should do something about those recommanded feeds and speeds, it’s been years…), so if we are using 10.000 RPM instead of 8403RPM, the feedrate should be increased by 10.000/8403 to 967mm/min to maintain the same chipload. This chipload is 813/2x8403 ~= 0.05mm per tooth, that is a bit high to my taste for a 1/8" endmill in metal, but why not. DOC of 0.2mm is right within the value range discussed above, so that looks ok.
Plunge rate of 100mm/min is conservative, but since CC does not allow ramping into the material, that is a safe value.

I just found a piece of 0.9mm copper (unlabeled, so I’ll ignore the specific type), and I have a 102Z, so I’ll try a few test cuts over the week-end, and report.

I am very grateful for the help with my project! I have been worried about cutting out the plaques but now I am convinced that it will go well.

Big thanks! I will of course post pictures of the result

I tried GWizard, using one of the copper entries that had a close hardness value (“CW 024A (CU-DHP)” exists in several variants from 40 to 110 hardness, so I picked one that was 95) 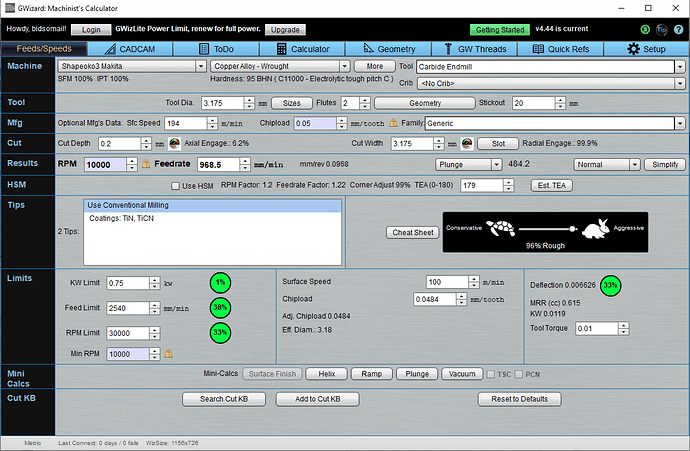 If I input the target chipload from CC (0.05mm), a 0.2mm DOC, a 3.175mm width of cut (slotting profile cut), I need to set the slider to 96% rough to get the ~967mm/min feedrate for 10.000RPM that CC recommands, which is WAY higher than I feel comfortable using. This tells me that my gut feeling about CC’s setting was probably right, or at least that I will not risk it. This always surprised me, some CC settings are very conservative, other look a bit crazy, or may it is just me.

I will try these settings this weekend, there is a label with “Half hard (not annealed)” on my copper-sheet, not sure what that means.

GWizard is licensed (and not cheap), it’s overkill for casual use (i.e. including for me) you will find many simpler calculators online to start with.

Here’s a pic from the test cuts (it’s not very useful, they all look similar) 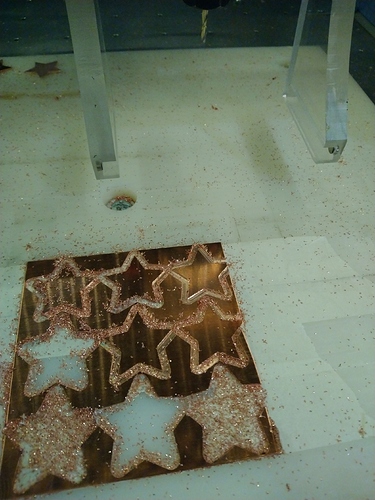 Also, I did not use any air/vacuuming/cleaning chips, on purpose, and it was not a problem for such a shallow cut.

I rushed this a bit, time to go to bed on this side of the pond, I may post close up shots of the cutouts tomorrow if need be.

looks great, thanks again for helping me. Did you use the superglue/tape metod to hold down the sheet?