Could the Shapeoko handle an extra 1 lb of router, in order to use the Dewalt DW618 Router instead of the DW611?

What would it take to stiffen (if necessary) the machine to handle the bigger router? Would the larger tool size, almost double the HP, and wider spindle speed range be something worth looking at?

This is an interesting idea! It would also allow a MuscleChuck to be used for easier tool changes.

I don’t have any additional insight, but I will be following this thread with interest.

There’s been a fair bit of discussion on this — a few folks got so far as testing the mechanisms to see how it would handle extra weight (the SO3 is really over-engineered for the current sizes, so the only changes ought to be new spindle mount and replacing the springs — except for one matter — the larger diameter increases lever effects, and the connection of the carriage to the gantry is only 4 Delrin V-wheels.

I don’t see what it brings to the table — the machine isn’t large enough to accelerate to speeds which would be able to take advantage of it, and the increased lever effects will exacerbate the issues of chatter.

A “real” spindle such as a Kress or Ugra would seem a much better option to my mind — esp. since they provide the lower RPMs which many materials want, and have narrower diameters which actually reduce lever effects.

Neither of the “real” spindles seem to allow for bits over 6mm.

As for lever effects of the larger diameter router… Could one use two Y-gantries (one regular, one slimmed down version) with the router mounted between them to eliminate lever effects, reduce chatter, and increase the carrying capacity. The second slim gantry support would make for a much more rigid gantry.

The downside would be a reduction of your useable workspace by the width of the router, mount and extra gantry. About 8" maybe? X and Z would not be affected.

I would be easier to extend the carriage back to the other side of the extrusion and add rails there, mimicking the double X-axis upgrade from the SO1 days (which then became standard on the SO2):

I can see that being useful to provide extra stiffness. Not as much as having the spindle supported from the front and back, but certainly taking up less space and making more work space available.

8mm is still not 1/2" though. Are the issues that would need to be overcome worth being able to use 1/2" router bits?

What is your goal, @MaxamillionX72?

I’m interested in this idea because I’d like a faster way to change tools, and I’ve only seen quick-release collets sold for 1/2" routers. I haven’t run into any power-related limitations so far with my DW611, but also I’m only cutting wood and plastic.

My question then becomes: has anyone seen a (reputable / reliable) quick-change collet (like the MuscleChuck) that would work with a spindle that is more readily mountable on a Shapeoko?

Thanks @WillAdams, I hadn’t seen those before.

If I understand the site correctly, the main quick-change advantage to the Precise Bits system is that it extracts the collet slightly as you loosen the collet nut, which prevents the bit from binding in the collet. Is that accurate?

What is your goal, @MaxamillionX72?

But seriously, it seems like a way to minimize deflection from using 1/4" bits, and use beefer 1/2" bits. Faster cuts, slower spindle speeds, better metal cutting, fewer broken bits. According to the CNC Cookbook website, double the diameter bit increases rigidity by 16 times. That’s pretty significant. Plus the added bonus of being able to use “mainstream” router accessories (like the musclechuck you mentioned)

I’m very new to CNC (currently building a workshop for a new Shapeoko 3 to be purchased soon) but have been interested in it for a while now and my limited knowledge is just from reading everything I can find. The more I read, the more questions I come up with. I appreciate input from people like @WillAdams who take the time to answer some of those questions. It soothes my inquiring mind. I couldn’t find anything online referring specifically to using the DW618 as a spindle and wondered about the issues/advantages.

Perhaps Carbide3D could really set themselves apart from competitors even more than they already are by providing an upgrade kit allowing the beefier router using some version of the double X-axis mentioned above, or the front/back support I suggested.

Perhaps Carbide3D could really set themselves apart from competitors even more than they already are by providing an upgrade kit allowing the beefier router using some version of the double X-axis mentioned above, or the front/back support I suggested.

I like that.
Double the Z mount plate, and Z stepper motors, like they did for the Y axis.
Maybe even double those X motors too. Those steppers are pretty cheap.

I love this idea. Thanks for all the information you posted, but what is the OD of this router. The Shapeoko adapter measures 69mm.

I love this idea. Thanks for all the information you posted, but what is the OD of this router. The Shapeoko adapter measures 69mm.

There is a mount available at http://www.cncrouterparts.com/dewalt-dw618-router-mount-p-355.html

according to the plan the OD of the router is 88.9mm, found here: http://www.cncrouterparts.com/dl/cad.pdf/CRP142-02.pdf

Looking at the router mount on the Shapeoko 3, picture explains better than I can. Seems whole new mount would be required ? 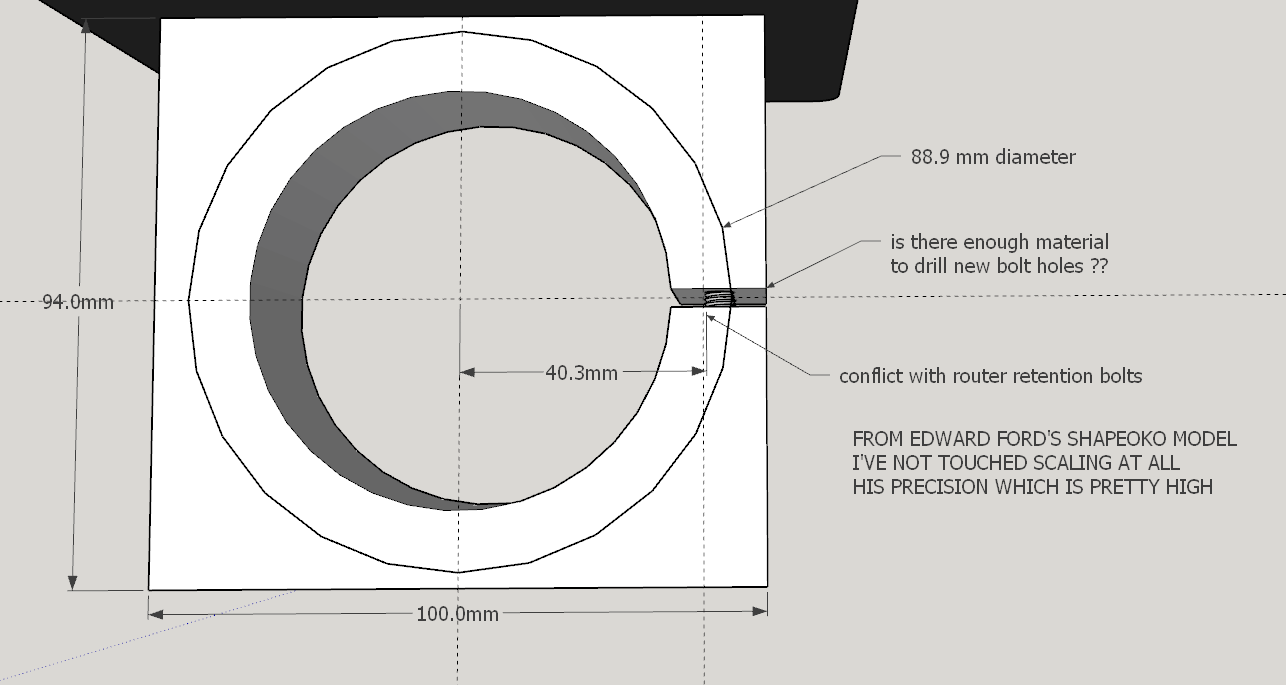 120mm width of new mount at bottom ? would this be required to maintain router retention strength ??? 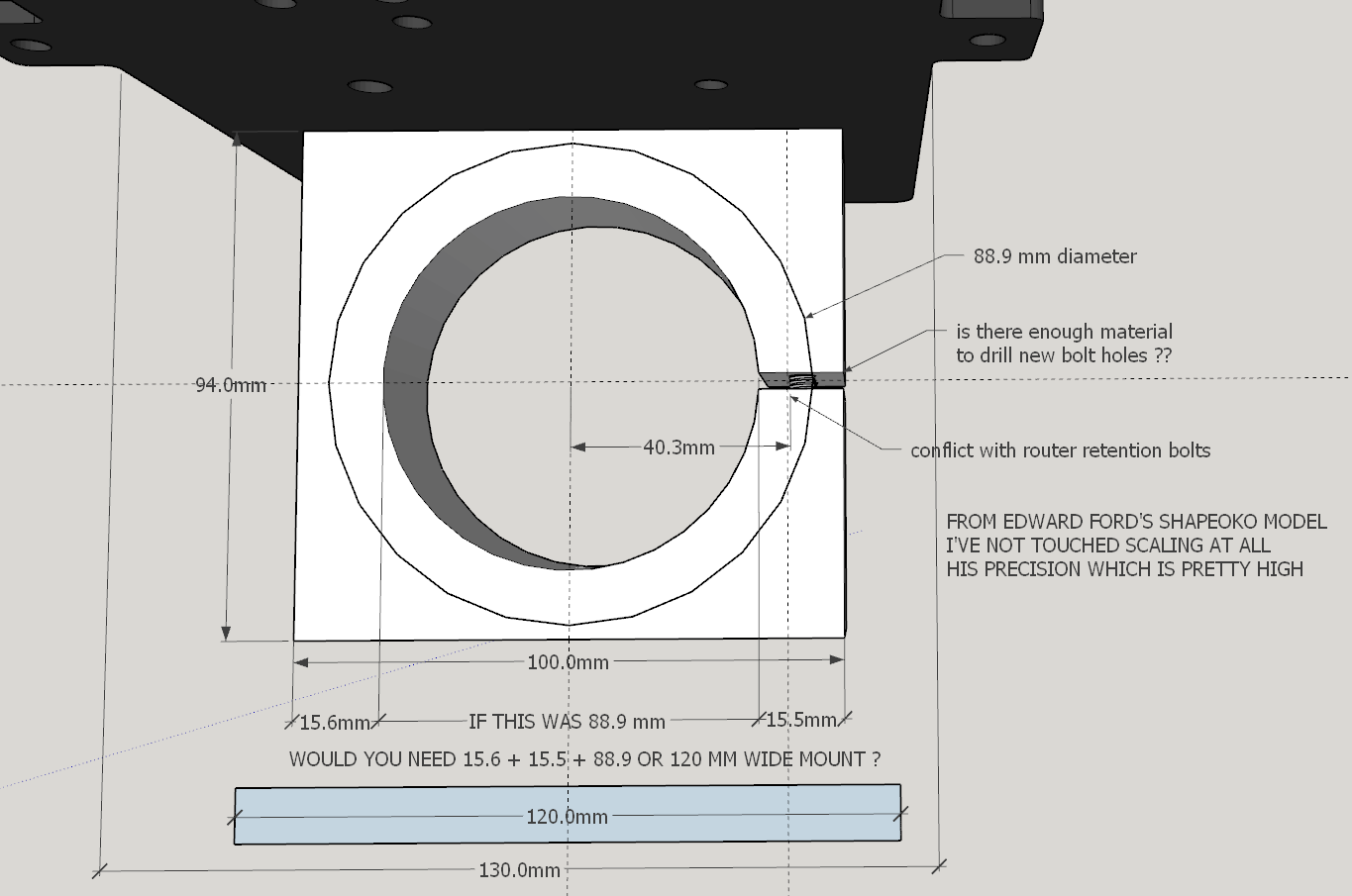 Maybe 100mm with a custom retention ring, like the Makita router ring for use in the standard mount?

120mm width of new mount at bottom ? would this be required to maintain router retention strength ???

The specs for the one I posted is ~114mm square. However the screws go in towards the front where it’s thicker instead of on the side. That doesn’t seem like it would be as strong, since you’re only applying pressure across the front plate and not across the front half of the ring