Has anyone had success in using a 3D Digitizing probe to be able to probe edges and bores on a Shapeoko without relying on conductivity?

Something such as this: High Precision CNC DIGITIZING touch PROBE for machining mill router 1/4" shank | eBay

I currently am using Carbide Motion so I’d imagine I’d either need to write some probing macros and run them manually or try different software. Can anyone point me in a direction here? I have no interest in 3D scanning. Just hoping to do things like find center of a workpiece, or probe bores.

There are some communication/control programs which support digitizers — bCNC for example.

Here’s a bit of previous discussion:

In Digitally Map a Surface in 3D [CNC Shark Duplicator] @JVarn was wondering (paraphrased) if a shapeoko could do the equivalent of something called “shark duplicator”, basically do a 3D scan and then a carve out of an object, and I couldn’t resist trying. Below is a short story with pictures on how this went. It all started with one of these: Which will act similar to the bitzero and bitsetter, and if you plan to buy one yourself, make sure you buy a “normally open” one that closes to gr…

Yes i hade recently got a probe like that.

Mine got a 3mm tip so when I zero with it I adjust the offset afterwards manual with 7mm .

Z i haven’t measured yet.

Are you using Carbide Motion when probing?

I’ve used the V2 probing routine with conductive materials to find bores, however it errors out after not long so probing large bores isn’t possible.

I think I understand what you are saying about adjusting the offset but could you elaborate? You are accounting for the size of the tip vs. where it triggers?

I found this exact probe on eBay and was interested in it - is it difficult to tune the concentricity of it?

Yes I use CM and V1 xy probing routine set with 3mm endmill(same as my probe tip) and then I adjust 7mm witch is the distance from the edge to the recess of the carbide probe. Z I do manual so far. And what I noticed is that it’s as accurate as the touchprobe.

To do more custom probing I will use cncjs and macros for probing. But not there yet. 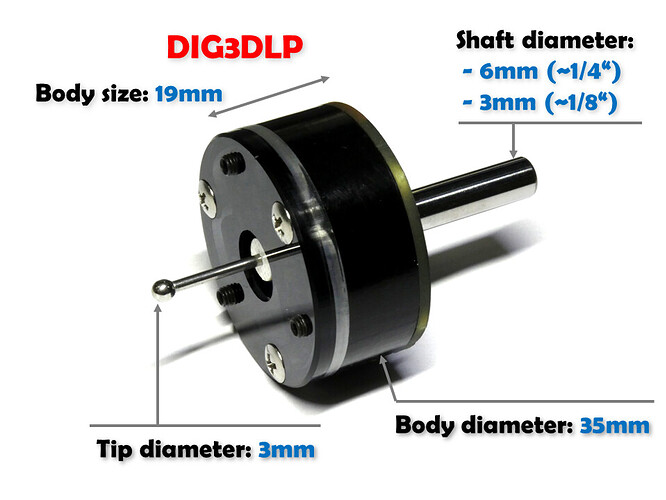 It took me about 20min to get it straight. So no big deal.

Thank you so much! I’m gonna order this model and experiment!