I’m working on a guitar neck and I’m having issue with homing.

I have had alignment issues with some previous double sided work, so this one is set up different.

In addition to two 3/8 alignment pins, I have a 1/8 origin hole drilled by the machine exactly at the center/end of the stock. Each time i change bits, i ask cncjs to return to X0Y0 and make sure i can lower the z directly into that hole. This assures me the alignment is correct.

I’ve run into issues recently where after homing and returning to the origin, it is off in the x and y direction by .5-4mm. After this adjust and reset the xy 0 coordinates.

This usually works, but recently i’ve found it looses xy during the job. In the instances i’ve tracked, it is not losing steps, but gaining them.

Looking for any insight on this kind of issue.

How did you establish that it “gains” steps ?

Thinking on that, I’m wrong. I was looking at it from a perspective where the Y axis was only cutting in one direction, but that may not be (and probably isn’t) the case.

Then if it is lost steps, it’s either during the cuts due to excessive force (and it becomes a feeds and speeds question), or something is slipping mechanically ?

When it was correct before the job, and off afterward, it could be step loss.

However, this is also happening after homing, and before cutting. It homes, I ask it to go to x0y0 and it is not in the same place it was before.

Am I understanding correctly that:

Also, does it happen only after the work piece has been flipped over? Or before flipping the piece over?

So far it has only happened after flipping the workpiece. However, for example, on this setup, it was still aligned after the flip. The first 2 operations with 2 different bits were fine. It aligned and dropped into the hole without issue. I rehomed, changed bits, rehomed again, clicked return x0y0, and it was off by 1mm Y and .5mm X

It sounds like the locating hole isn’t centered on the axis plane, is there a way you can measure outside of the CNC?

And if everything checks out above, are there any odd sounds when nearing home to indicate the stepper may be losing steps or acting in an unexpected way? Maybe the doubled over part of the belt is interfering or there is something sticking on the rails?

The issue is, its unpredictable.

After the second operation finished, it homed. I returned the machine to x0y0, and it was off. No weird sounds, and not near the ends of the axis where the belt would interfere.

I would do a full system check, maybe the collet is damaged and providing inconsistency at the end of the endmill (excessive runout), maybe a stepper shaft is bent. Either way I would do the full setup for squaring and belt stretch calibration, at least then you could eliminate the machine assembly as the source for the inconsistency… Why it is unpredictable is also an important question…

So far it has only happened after flipping the workpiece. However, for example, on this setup, it was still aligned after the flip. The first 2 operations with 2 different bits were fine. It aligned and dropped into the hole without issue. I rehomed, changed bits, rehomed again, clicked return x0y0, and it was off by 1mm Y and .5mm X

This part here makes it sound like your workpiece may be shifting during your milling operation (vibrating and ‘walking’ ever so slightly…), do you have a way to reinforce or improve the hold-down process you are using?

I use fitted screws to hold my panels down to the spoilboard, maybe you could build a ‘sled’ for your pieces, or use the ‘superglue-between-two-pieces-of-painters-tape’ method on your next operation…

I have (6) 2.5 inch screws holding it to the wasteboard along with the 3/8 stainless index pins holding alignment, so I don’t think it shifting.

Not to doubt your setup, but there is positional slop/flex possible in the ~1-inch-plus-1.5-inch joint holding your piece to the board (1-inch through your stock through 1.5-inches of your spoilboard, using a 1/8" wood screw shaft is not super stable), significant milling forces/vibration could make it shift…

I would at the very least try the superglue-and-tape method I mentioned above to make sure your workpiece isn’t moving, especially if the occurrence of misalignment is unpredictable…

From what I see ‘workpiece slippage induced by milling forces’ is the most likely thing causing your issue, maybe others can chime in…

Here are some pics. The 1/8 hole in front of the index pin was peck drilled as the origin. Each time I start a job I put an 1/8 end mill in. Tell into go to work zero on x and y, then slowly drop z down to make sure it lines up, before the spindle is on or anything is cut.

Out of 15 tool changes for this job, 1 time it came up slightly off (1mm and .5mm). This happened on another neck this way too, but it was more off. 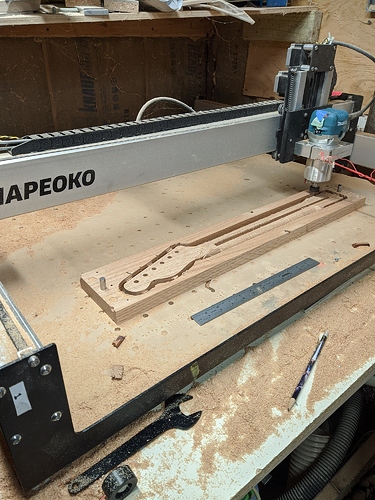 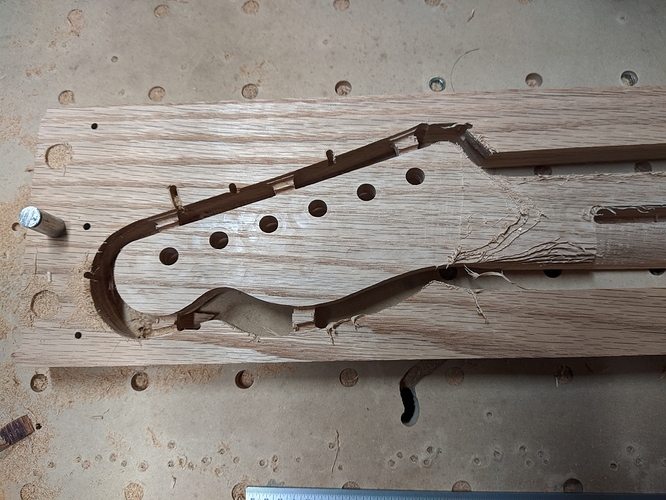 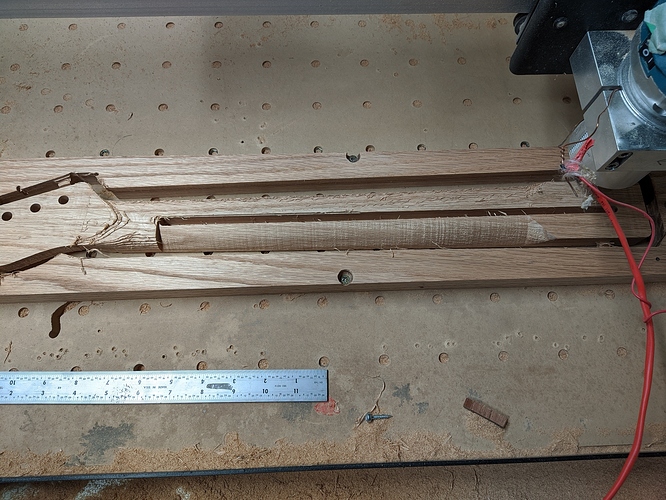 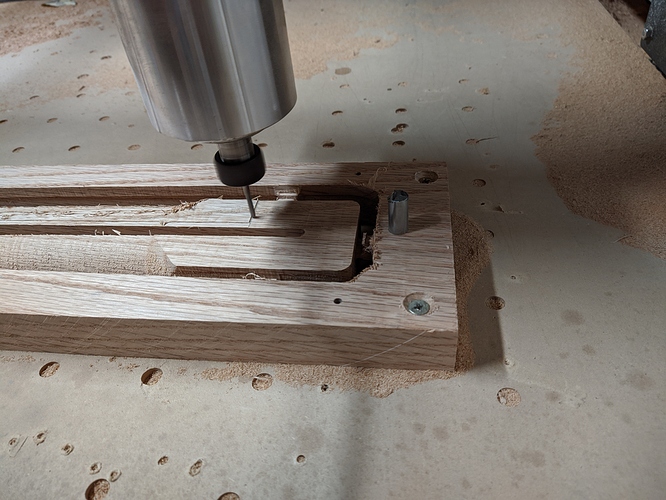 It’s seems like it is time for a homing repeatibility test. Can you home and return to X0Y0 ten times or so, without changing anything else, and check how accurately and repeatably the cutter returns directly above that 1/8" hole ? Ideally starting from different positions in the work area before homing.

Yes, you are correct about the index pins.

I will work do some homing repeatability tests and post my results.

Let us know what you find. I also wanted to mention that your issue has some similarities to the issues in this thread here…

Is that red oak? or maybe hickory or mahogany? I make pickguards for strats/teles so I am familiar with the process, and curious what wood you are using…

I actually finished the neck so I can start doing some homing tests now.

This is red oak. It is actually made from some handrails I garbage picked and glued up. Not a typical choice, but from what I’ve seen on the tdpri forums, it will be OK. The tele body I made is another garbage picked mismatch. A kitchen tabletop made of beech with 1/4 oak laminated on top. Fret markers are jatoba, truss rod skunk stripe is maple. Total wood cost is $0. 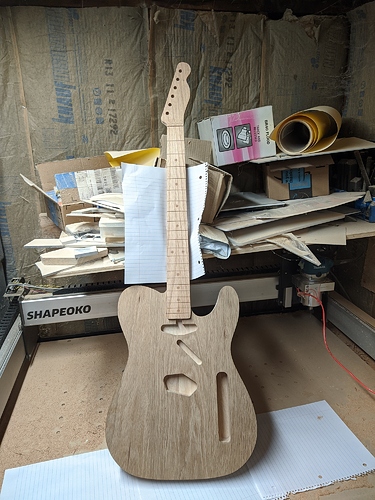