Drill Mill in a Shapeoko

I am trying to make some Cribbage boards using my S3. I saw this post where Nathaniel used a “drill mill” to make the holes.

Winston has you covered as always: 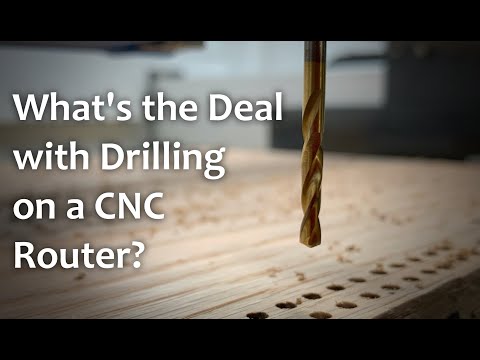 Yep, Winston covers why you bore instead of drill in most cases.

I do still drill small holes on my Shapeoko though, using carbide spot drills or drill mills at relatively low speeds (3,000 to 10,000 RPM). I do this when the hole is too small and deep to easily bore with a sensible sized end mill (e.g. 2.5mm for M3 tapping).

This is designed for plunging into the workpiece and to provide good chip evacuation when in the hole whilst most end mills are capable of plunging but don’t particularly like it.

Note however that the pointed tip means you shouldn’t try a boring op with this type of cutter as the pointed tip will want to stay in the center of the V shaped bottom of the hole it is making. This makes it good at being a drill and bad at boring.

The main issue you’ll find (other than plunge rate, machine load, material burning etc. as Winston describes) is being able to fine tune the hole diameter as presumably you need an accurate fit between your cribbage pins and the holes.

Thank you for the replies. I watched Winston’s video a couple of times and he indicates that using a DeWalt router isn’t ideal as the spindle speed can’t be lowered enough. Unfortunately I have the DeWalt does this mean I’m out of luck for drilling with a drill mill?

They do not wander and they leave a clean hole. I peck drill using the diameter of the bit as my depth for each peck.

I’m trying to find some pictures on my phone to post of close-ups of the holes, since I am laying in bed and don’t want to get up. 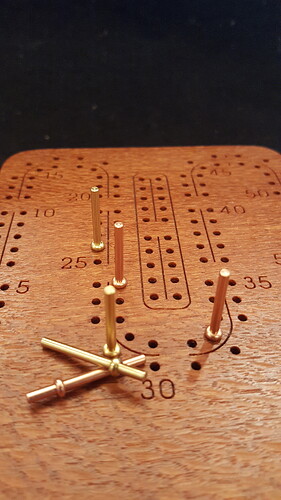 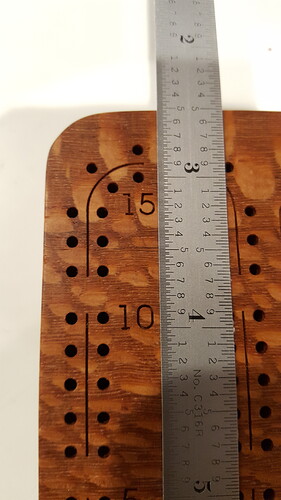 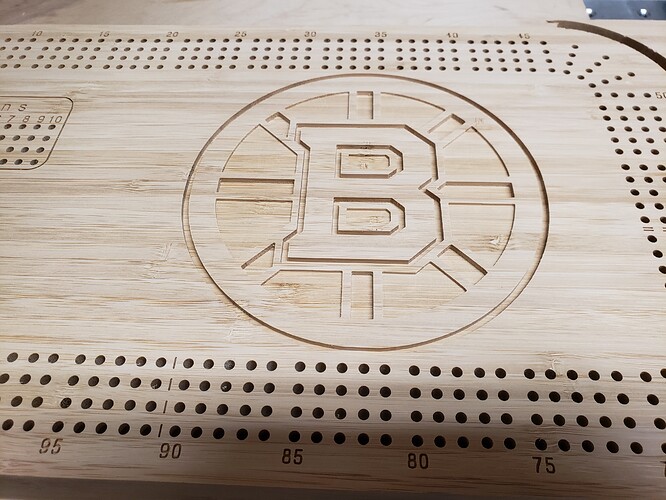 @MadHatter Thank you for the screenshots, those look great! Can I ask what did you design them in? What did you use for your feeds and speed for the 1/8" holes?

Thanks, I used to design the boards with Inkscape and create the g-code with Makercam.com. I still do it that way, but I used to, too. [RIP Mitch]

I used Inkscape for the fantastic alignment tools and ease of use of said tools and how I can change the line thickness to see how things would look with different bit widths. And now, having used it for so long I just keep using it to design my 2D designs. I will then import them into Vectric V-Carve for creating V-carve g-code, but I run a standalone version of the makercam.com program on my computer for cribbage board designs still.

Thank you. Unfortunately I have the DeWalt router so I will have to see how it behaves at ~16k.

When I was running the DeWalt router, I used the SuperPID to control the speed. It also eliminated the EMI disconnect when turning it on and off.

Compensate for the speed with ipm plunge. Likely slow but the goal is a smooth drilled hole.

Ha. In my ignorance, I’ve never considered this a problem. I’ve drilled 1/8" holes for indexing pins (for double-sided milling) using my 1/8" solid carbide flat end mill. Only in wood, so a more forgiving environment. Pecking distance = bit diameter. Never had any problems.

I’m planning on using these 1/8" Diameter 2 Flute 1/2" Cut 1-1/2" Length 1/8" Round Shank Single End 90DEG Uncoated Carbide Drill/Mill. I haven’t found the feed and speeds but I have asked the company.

@sjj47 My understanding is a drill mill isn’t a drill bit as it’s solid carbide and meant to run a higher RPMs.

That’s how I read it too, that’s fast enough to be quite picky about the runout in your collet.

I run a solid carbide 2.5mm drill at 10kRPM in my spindle for drilling ops and it seems completely fine with that. The solid carbide cutters are very similar to end mills in terms of rigidity and strength, also how easy it is to snap them if you try to use them by hand…

I’m presuming that the machines used for these small bits use the very high speed spindles required to get the surface speed right at this small diameter.

Here’s a video of my SO3 XXL with spindle cutting 1/8" holes with this drill bit in an Ikea bamboo cutting board for a baseball dice game board.

Disclaimer. I work for Think & Tinker / PreciseBits, so I’m biased. I try to only address things generally, provide general information, and stay brand agnostic. But be aware that I do have a bias.

My understanding is a drill mill isn’t a drill bit as it’s solid carbide and meant to run a higher RPMs.

Drill Mills are exactly what they sound like, a mill with a drill or “V” style tip. My understanding of their history is that they don’t do either job great but are useful in areas where you don’t want a tool change and even then only for drilling, milling a groove, or chamfering.

They are quite different from drills as in drills all the cutting is done at the tip and the flutes up the tool are only meant to carry away material. In fact at the tip of a dill is the only place that is actually the listed diameter (in most cases). They have either a step or taper after that which is why you can run into issues with too many re-points.

I doubt they are spec’ed to higher RPMs as most small carbide drill bits are balanced to 80-100 KRPM. You could balance them to that but there would be little point with their geometry and intended material in my opinion.

Yeah, and I know one customer that ran them at 120,000 RPM. Although, officially, I don’t recommend that.

That’s how I read it too, that’s fast enough to be quite picky about the runout in your collet.

I run a solid carbide 2.5mm drill at 10kRPM in my spindle for drilling ops and it seems completely fine with that. The solid carbide cutters are very similar to end mills in terms of rigidity and strength, also how easy it is to snap them if you try to use them by hand…

I’m presuming that the machines used for these small bits use the very high speed spindles required to get the surface speed right at this small diameter.

That’s correct, the sheet runs from 80,000 to 20,000 RPM. Keep in mind that those feeds and speeds are for FR-4 not soft material. Change of material obviously changes the feed and speeds.

Yeah, pretty much everything becomes an issue at those kinds of RPMs even the collet nuts have to be spec’ed pretty high.

Using them by hand the issue is usually side load. These kind of drills (and drills in general) are only really strong in one direction. Any side load and you will snap them as it’s not their intended use, and physics being what it is, you pretty much can never get something without giving something back. They are pretty tough in intended use though.

All the above aside, with the caveat that I haven’t had a chance to look at the video here… There shouldn’t be an issue using carbide drills like these in most cases. We have luthiers, cue makers, woodworkers, and obviously PCB manufacturers that use them in production settings. The most I would worry about is the extra stress on the routers as most of them don’t really like plunging. However, at small diameters, in soft materials, I doubt there would be much of an issue. Anecdotally, I know a couple of our customers with 611s that do cribbage boards as their main job. Thousands upon thousands of holes later there were no issues. Take anecdotal data for what it’s worth though (very little).

Here is the speeds and feeds chart from the manufacturer https://onlinesupply.ca/image/data/Skookum-End-Mills/End-Mill-Feed-Speed-Chart.JPG

Using this calculator Drilling Speed and Feed Calculator for the 1/8" drill mill with the RPM set for 16500, I get a SFM of 540. Which seems line with the above chart, no?
Bumping MadHatter’s 10IPM plunge rate to 16IPM gives a cutting feed of 0.0010.
Should these above values work for drilling holes using peck drilling?

I was hoping someone else would comment on this. But I feel bad seeing this hang here so I guess I’ll try to jump in.

I believe they were referring to the chart on our site not to the bit you referenced.

Here is the speeds and feeds chart from the manufacturer https://onlinesupply.ca/image/data/Skookum-End-Mills/End-Mill-Feed-Speed-Chart.JPG

Using this calculator Drilling Speed and Feed Calculator for the 1/8" drill mill with the RPM set for 16500, I get a SFM of 540. Which seems line with the above chart, no?
Bumping MadHatter’s 10IPM plunge rate to 16IPM gives a cutting feed of 0.0010.
Should these above values work for drilling holes using peck drilling?

Don’t want to comment too much on this as per my previously listed bias. General info though…

It depends on the material and the tool geometry. However, in general for wood (my assumption based on listed use in cribbage boards) you shouldn’t have an issue with even max RPM. Even in their table for aluminum they list a top SFM of 1200 which would put you at over 36K. Just make sure you don’t skimp on chipload.

Can’t tell you what exact chipload to use for this as there are too many unknow variables (material, runout, tool geometry, etc.). In general I’d try to keep a minimum of a 0.002" chipload in most woods to keep from burning. However, as runout adds to the chipload, I don’t have any idea of the tip geometry, and a drill mill will engage the mill section in drilling you will have to experiment some to see what works for you.

Slightly more specific… If I were to guess I would say that you will need more chipload than MadHatter was using as the drill mill will generate more heat in the cut than a straight drill. That will depend on tool geometry and runout though. They could put a back taper in the mill section to try and help with the drilling at the cost of a weaker tool. That would add to the grinding complexity and machine time though. You will most likely also have a different end geometry than a standard drill to help with milling. So your rake and sear will also be effected compared to standard drills.