No wiring involved so installation would be simple. Are there issues with this configuration ?

It doesn’t make much sense to me but my reasons may not matter too much to you:

Cutting off power to the Shapeoko is a good idea but the mechanism really needs to be as reliable as possible. This is an E-Stop after all, you’re going to want to use it when something Really Bad™ is happening and you need that machine shut down NOW. Something might be on fire or about to explode.

If it weren’t critical, you wouldn’t need to use the E-Stop, you could use Carbide Motion.

Depends what you want the e-stop to do.

If you want a ‘feed hold’ soft hold then you can wire that up directly, there’s a whole thread about that.

If you want a safety device then, as Lucas says, wireless isn’t really safety. A standard ‘magnetic switch’ e-stop for power tools would do to allow you to shut off the router and shapeoko as well as an emergency stop.

As @LiamN mentioned, a magnetic switch such as this through Amazon would work. However I believe most such switches are for a single device so one could in principle add this to a 4-gang electrical box or even a quality power strip and be able to kill the AC mains to the Shapeoko power supply and router at the same time.

Should add that better switches also have the magnetic interlock feature so that if the mains power should fail and then return, the devices attached won’t automatically restart in your possible absence.

And there’s some which come with outlet sockets for use on router tables;

I’m not a lawyer, but I don’t thing you can trademark doing really bad things on a Shapeoko.

I’m not sure the Kreg version has the magnetic switch integrated. So if for some reason power failed and you weren’t there to reset the paddle, at the very least the router would restart and spin when power is restored.

I should mention that my preference is for the multi part solution for two reasons. The safety reason mentioned above and cost. I help maintain a community workshop and people are hard on equipment. While we do ask them to unplug routers while changing bits in the table and they do, we ask them to unplug the cable at the wall and not the router cable running back into the paddle. Why? Because the paddle switches with intergrated outlets are expensive compared to a $3 module to go in the electrical box. The springs inside the outlet get weak and the plug becomes loose and more trouble ensues.

Cheaper long term maintenance issues if we build up a solution from a 2-gang or 4-gang box and an external switch without its own outlets.

This is probably a non-issue for a Shapeoko + trim router though.

Most E-stop switches I found through amazon had either 1 NC circuit, or 1NC and 1NO. I Had to do some digging, but eventually found this switch with 2NC switches tied to the red button. This allowed me to run on 2 totally separate circuits for Shapeoko and Router, but still kill everything with 1 button.

Edit: I used magnetic switches positioned after the E-stop, for both circuits. So when the e-stop button gets “deactivated” the equipment still needs to be powered up with its own dedicated switch.

Thanks for the responses.

For clarification I will be removing power from two devices with the E-Stop.

After the rather decisive comments about the reliability of a wireless outlet I contacted a friend of mine who is an electrician.

He will be constructing a circuit using a contactor which will isolate the two circuits and will have an E-Stop and reset button.

Thanks for the feedback.

Something might be on fire or about to explode.

I know the following isn’t really SEXY and over-engineered, but it should be hard to object to the utility of my solution to the EMERGENCY STOP problem (although some will certainly try!

You could add some over-engineering and paint it RED and add a bar across to link the two switches so you can SLAM them off when you get skeered. 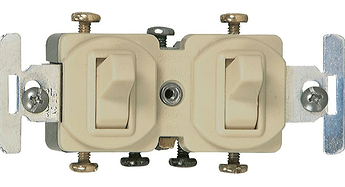 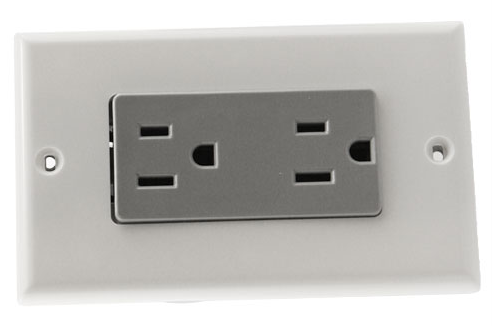 No, I don’t think so. E-stop = Emergency Stop. You hit it when it’s an emergency, i.e. something really bad is going to happen. With the power of some of the spindles I’ve seen mounted on a Shapeoko, I don’t think dangerous shrapnel from an exploding part or endmill is at all out of the question.

(Which would be MUCH more typical.)

I’m using THIS for over a month now and got it controlling 5 different machines, but not my VFD.

One thing that’s worth noting is that on the VFD controlled spindles the spindle stop time is much longer when you cut power to the VFD than the stop time when you ask the VFD to stop the spindle. This is because the VFD can actively brake the spindle when it still has power.

My philosophy is that having two buttons is the best way- a normal button to use as feed hold, use this if you want to halt the machine but it’s not an ‘Emergency’. This is the one I hover over when running a new toolpath to stop the machine if it does something I didn’t intend. pressing it halts the machine immediately.

The Emergency stop should be as big as possible, and as easy to reach as possible. Having seen someone dragged into a big lathe, and them unable to get to a stop button or foot brake, I know that when you actually Need that button, you won’t have the presence of mind to flick a light switch, you just want to hit the off switch, with your hand, knee or anything else!

the VFD can actively brake the spindle when it still has power.

Most high-end VFD offer this feature as an optional add-on. Most Chinese VFD’s lack this option. For some, it’s available as an option to be purchased separately, and some others don’t support it at all.

But the cheap HuanYang that many people here end up getting in the pack with the G-Penny spindle does stop the spindle quite a lot faster on a stop command than when simply disconnected. Mine does this even without the additional DC braking resistor connected to the P, N terminals. There is an active run-down in frequency rather than just disconnecting the motor and letting it spin down.

and as easy to reach as possible.

I’d say that the duplex switch, if placed in the same location, might even be easier to switch off with a downward swiping action.

Having seen someone dragged into a big lathe, and them unable to get to a stop button

I’m unaware if this is even possible on a Shapeoko.

Now, if its so mandatory to have a big and red eStop switch available when one gets wrapped up into the router, then that switch surely should be mounted right there next to the router instead of down over the edge of the work table; shouldn’t it?

All contingencies are possible?

duplex switch, if placed in the same location, might even be easier to switch off with a downward swiping action

True, but there has to be a reason major manufacturers use big red buttons rather than light switches… and why most international standards require Mushroom/pushbutton switches

unaware if this is even possible on a Shapeoko

Fair point! however leaning across your machine and sticking your hand into a router running at 30,000rpm is not a dissimilar situation. An Estop on the gantry isnt the worst idea, I guess if you’re running a router you’ve got a switch right there.

A lot of people who start on hobby machines end up with bigger machines, I think it’s good to encourage good habits from the start to avoid getting caught out with the big stuff.