Does anyone know of a chart like this one (https://docs.carbide3d.com/support/supportfiles/Nomad883_feeds_125.pdf) but for nomad 3?

No but you can essentially reuse Nomad recipes, increase RPM to leverage Nomad3’s higher upper limit of 24k and increase the original feedrate by the same ratio as the RPM, and you’ll end up with a cut that is the same quality but in less time.
This Nomad chart is quite old though, I would use the feeds and speeds from CC’s database or the values from Winston’s MaterialMonday Nomad videos instead

Also, MeshCAM, when in Carbide 3D license mode as bundled w/ a Nomad will have feeds and speeds for that machine.

@WillAdams @Julien Thank you both! I’ll look into those!

Eh, after working with a few customers with Nomad 3s remotely to develop recipes…its not that easy.

Trouble is, rigidity and tq bands are different enough to not really scale perfectly. Would really like to get my hands on one but not sure when that will be.

Trouble is, rigidity and tq bands are different enough to not really scale perfectly

Sure, but doesn’t it provide a decent starting point? Optimized recipes, that’s a different story, but no single chart is going to provide that anyway.

I really wish Carbide3D would invest some time into an updated chart with good recipes for the Nomad 3. At this point it almost seems like the Nomad 3 has been neglected — even the website is mostly about the “Nomad 883 Pro”. Is it really that insignificant compared to the Shapeoko business?

No but you can essentially reuse Nomad recipes, increase RPM to leverage Nomad3’s higher upper limit of 24k and increase the original feedrate by the same ratio as the RPM

What ratio would you use here as a starting point?

What ratio would you use here as a starting point?

In theory the ratio should be [the actual RPM you will use, divided by the RPM the recipe was designed for]. That’s purely from a mathematical point of view, to maintain the same chipload.
Chipload = feedrate / (number of flutes x RPM), so if you increase RPM by X, and want to keep the same resulting chipload, you need to increase the feedrate by X too.
And since oftentimes it is favorable to maximize the RPM to reduce cutting forces, that would mean using 24k instead of 10k, and therefore multiplying the feedrate by x2.4
As Vince noted there is more to it than this, but I still think it’s a decent starting point and then experimentation is key anyway.

I’m afraid that’s out of my hands, but I understand that the intent is not to issue charts anymore, but rather to provide recipes inside the tool library in Carbide Create.

I’ve been doubling things from nomad 883 to the 3. So previously for hardwood projects I’d usually start at 10k rpm 850mm feedrate, nomad 3 recipe is now 20k, 1700 feedrate. I’ll usually increase speed in carbide motion as well since ive found the machine seems more robust, and so doesn’t sound as complainy.
24k rpm is max, so there’s still some room to go higher for things.

Thanks for your reply. Have you tried Delrin or aluminum?

I did a surface on aluminum using the old nomad speeds feeds on nomad 3 and it worked fine. I’ll run another thing this weekend with the doubled feed/from and let you know. Not sure if I have delrin laying around.

Running the double rpm/feedrate and it seems to be going fine. I did some finishing strategies in geometries that didn’t have all the stock removed with a 1/16th in. endmill and…I broke an endmill (RIP), but otherwise things have worked out pretty well. My buddy is going to sand them slightly, but still fairly happy with how they look. I can’t feel the lines with the finger nail, so calling that a success.
Here’s a picture earlier in the day (before some of the finishing process happened):

Thanks for the update. It looks awesome! RIP endmill

I have had very limited success with the feeds and speeds on the nomad 3.
Using recommended speeds and feeds, DOC and materials I suffer with the machine snagging and bogging down, flashing lights and broken 3.175mm endmills.
Doubling the spindle speed and the feedrate makes this even scarier, the chatter is intense, and the snapping of endmills and bogging down of the machine can happen even more erratically.

I have managed to make a vice and a couple of clamps in alu so far. But never at the recommended speeds and feeds. It was a noisy struggle.

Plastics and wood are easy though. Have had no issues more than doubling in some cases for many other materials, also ceramic. 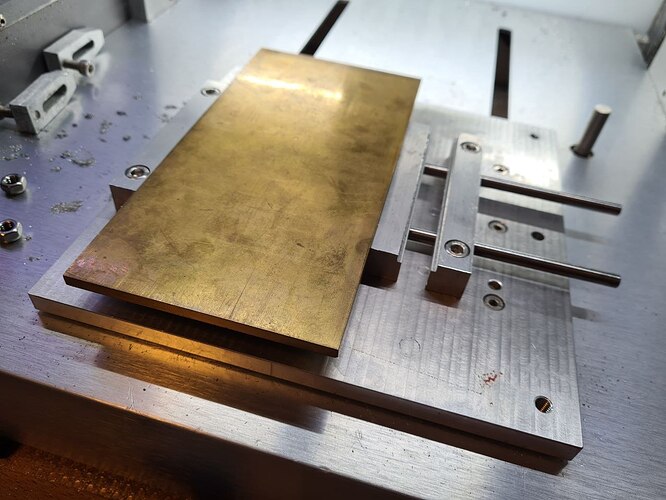 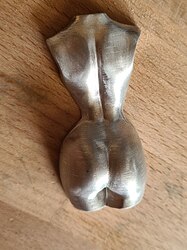 For sure the “doubling the RPM and feedrate” rule I mentioned only makes sense if the initial recipe at half-RPM/half-speed was working for you previously. It’s really just a scaling thing, basically just another way to say “let’s keep the chip thickness the same as it was, but increasing material removal rate since the Nomad3 can spin faster”

What specific recommended feeds and speeds are not working for you in metal? (including endmill type and whether you use any cooling/lubrication). There might be incorrect values floating out there.