First foray into inlays, but the result is not as expected

I researched as much as I could (handle) before plunging (get it?) into the world of inlays, and started with something quite simple, to get my feet wet.

Although the inlay fitted the gaps weren’t consistent, leaving a deep hollow in the body of the bee.

I’ve attached the two files, but am using a 1/4" 60 degree V bit, with an Advanced VCarve toolpath with the following settings:

I know there are lots of YouTube videos and spectacular threads on this forum - and I’ve read/viewed a few of them several times, I promise - but I’ve probably confused myself by trying to learn the principles in VCarve Desktop and converting the practicalities into CC.

Is “S” start depth?
Ok the male inlay, there should be a start depth that is most of your Female pocket depth.

[2] [1] The angle of the bit just depends on the detail you need. I use 60deg for most. The “Start Depth” is the amount the inlay will insert into the pocket before the design matches up. You want this to be most of your pocket depth. Glue Gap = Female Pocket Depth - Male Start Depth Saw Gap = Male Max Depth - Male Start Depth I don’t see a reason to go more than 5mm or 0.2" on a pocket depth. Glue gap isn’t as much for glue as it is for clamp force (works better when you REALLY clamp i…

Yep, as per the relevant screen in CC. Sorry, should have made that clear.

Looks good to me. Just remember the machine will need to take a deep cut to start on that male inlay.

As it happens, I didn’t get on very well

The .c3d and .nc files are attached, and this is what I should’ve ended up with: 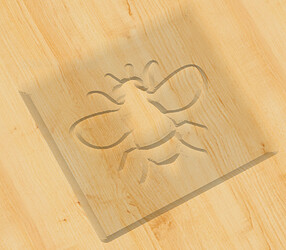 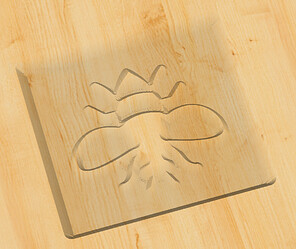 …but this is what I got: 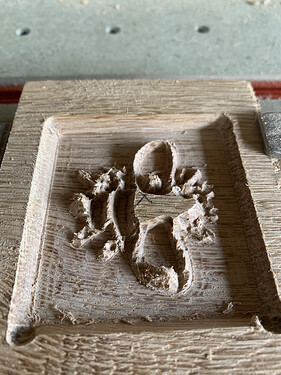 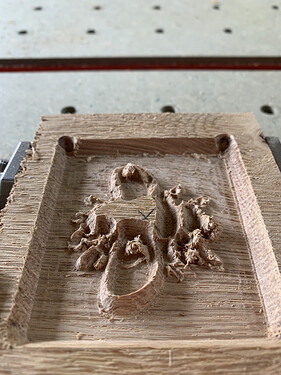 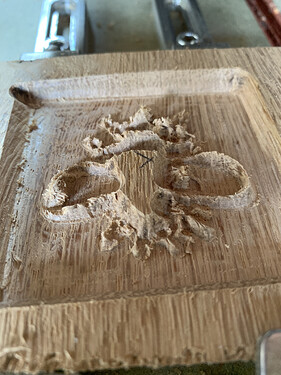 Ouch.
I suggest you try the exact same cut in MDF, see what happens then.
Some woods (what kind was it? oak?) tend to tearout when vcarved with a less-than-perfectly-sharp bit, but not to that extent. And the feeds and speeds look correct (you could increase feedrate, but still this should work).
You could also retry at lower depth per pass for the sake of checking if this changes anything (but 0.08" is perfectly reasonable)
I suppose the clearing part of the toolpath with the 1/8" square endmill went well, and things got weird after changing to the vbit ?

I suggest you try the exact same cut in MDF, see what happens then.

OK, I’ll do that. the original cut was in oak, yes.

I suppose the clearing part of the toolpath with the 1/8" square endmill went well, and things got weird after changing to the vbit ?

It did indeed. I thought it was going really well until then.

I’ll let you know how I get on.

This is after the clearing path in MDF: 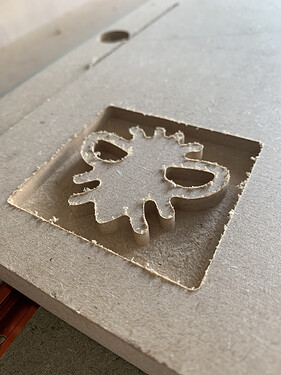 And this is after the V cut: 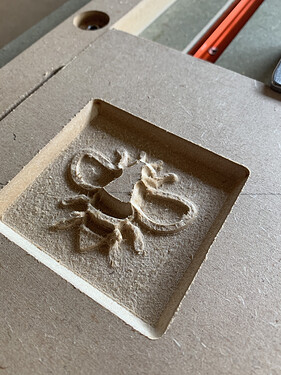 I found these pieces in hiding… 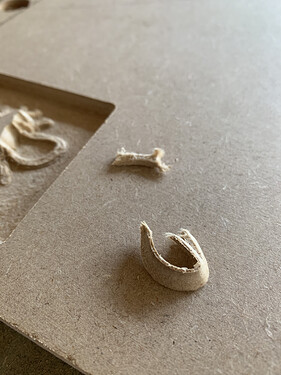 …and I presume the rest went up the dust extraction system.

I ran this a second time, because I’d forgotten to change the spindle speed from 10k (for the #102) to 18k for the V bit, but the result was the same.

Well at least the corners look right now. MDF is not great for vcarving as it won’t hold tiny detail, but you should still not have such major tearout. Is this with a reasonably sharp/fresh #302 V-bit ?
Let me have another look at the design & Gcode files.

Is this with a reasonably sharp/fresh #302 V-bit ?

It’s not brand new, but hasn’t been very much as I haven’t yet had much success with v-carving

Well I can’t spot anything obvious on the files. Maybe just the fact that this is a relatively small piece, the legs of the bee are 0.05" wide, (but that should not be a problem).

I would suggest you take a step back and try a simpler, larger test v-carve cut, in MDF for now.

For example, make a project with a 1" tall “TEST” text, and vcarve that. It may give us hints as to what is going on.

Do you have another V-bit you could try, to rule out the possibility that it’s the tool ?

Do you have another V-bit you could try, to rule out the possibility that it’s the tool ?

make a project with a 1" tall “TEST” text, and vcarve that. It may give us hints as to what is going on.

OK, but I’ll do that tomorrow.

Yeah so I would try creating a test design with that tool, another one for the 60° tool, and run both.

Don’t worry, there is no reason why your machine can’t produce perfect vcarve jobs. Probably the ONLY mdf project of mine I still like is this one, and that was on my (back then) stock SO3 with the #302: 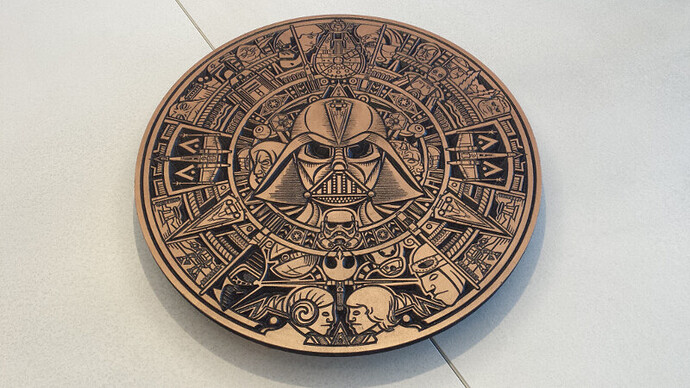 You only need to find the Force. or something.

Just a thought, @Julien. This might not be relevant, but cutting the female part of the inlay worked really well.

So, I had a go at writing some text, as you suggested @Julien, and this is how it looks: 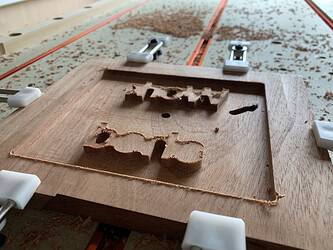 …for the clearance cut, and… 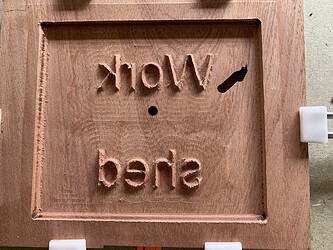 I think this is better than the bee, so I’ve cut the the female part and stuck them together, so I’ll see how that works out tomorrow.

This was cut into a scrap piece of oak, and does look a bit rough, but I wonder how it will turn out?

That is better, the wood may not be the best one and/or the vbit may not be as sharp as it could, but it could still turn out to be quite ok since the residual tearout happens on the top edges of the male part, which end up hidden in the female inlay grooves anyway. We’ll see !

Remember, the top of your male inlay is not meant to look good, especially on narrow details. Some of it is not tearout. By intent, the tops of the narrow features will be carved away.
The part that you will see is a few mm down from there.

Trust the math. Trust the process. Coat with glue. Clamp like a gorilla.
(And use a tighter grained wood next time)

A bit of an update…

Trust the math. Trust the process. Coat with glue. Clamp like a gorilla.

…and, as you suggested, @Julien, cut some 1" lettering and made this as a test piece: 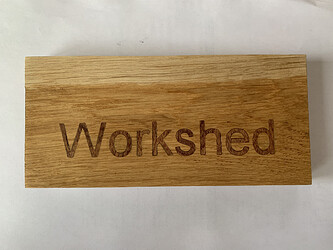 …and although it looks pretty good, there is a flaw to the left of the ‘W’ here: 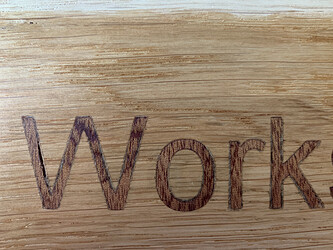 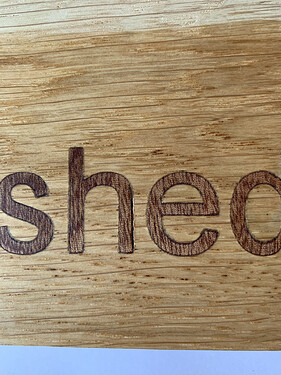 …or am I being too critical and my expectations too high?

when you glued the male part in the female part, how much did it stick out from the surface before sawing/surfacing/sanding ?
Since most letters came out just right, I suspect the “W” problem is unrelated to the design process, it must be a cutting mishap?