I’m still trying to find what is ailing my Shapeoko. Passes are not consistent along the X axis. As a result, I get inconsistent and random results, type is gouged, geometric shapes are not always consistent.

In the process, I was looking if anything was loose then found that there is slop along the X axis. When the Shapeoko is under tension, I can move the X axis about 1/4in in one direction and the stepper is turning slightly. At first, I thought that the gear was not attached properly or loose but the allen screws are tight and if they weren’t, wouldn’t they move more than a 1/4in? A week ago, I found one of those allen screws on the X beam and reinstalled it and I added loctite. It looks like the stepper is turning slightly but I can’t seem to make it move by hand without the belts being installed and putting pressure on the carriage.

Does anyone have an idea of what is going on?

It has to be one of:

I guess that I will remove the stepper completely tomorrow to inspect and ensure that the screws are set on the flat portion in case it moved when the screw fell off, before I reinstalled it.

The belt looks good, it is tight, it does not slip.

take a close look at shaft bearings in the router

Thanks, the bearings are fine, there is no extra router noise, the slop is in the carriage not the collet. I can move the carriage by pushing to the left when it should stay in place. The gear turns a fraction of a turn.

I will disassemble the X stepper from the carriage and look for the issue.

I removed the stepper, I confirmed that the gear was effectively moving about 1/8 of a turn. The set screws appeared to be tight. I was able to remove one of the hex set screws (the one that was on the flat) but the other was not budging, I probably stripped the head. I used a puller to remove the gear and tried to drill out the set screw. That bugger is hard and I do not have that size of set screws nor a small enough tap to fix the thread after I drilled it. I have a case open, I will send another message to support but my last few messages went unanswered.

After modifying the gear, I reinstalled the gear on the stepper and tested everything. The slop had disappeared and I ran a project successfully, everything is finally running smoothly.

I am puzzled as to why these set screws are so small, you need a very small tool to set them so there is very little leverage and the screw head can strip easily and in the end, not very sturdy for a critical component. Maybe at some point, I will remove the small set screws on all the gears and replace them with the larger ones.

You can also replace the set screws with cap screws of the correct length/thread:

Get rid of those PITA set screws and replace them with 10 mm long cap screws. You’ll thank my later: [57 PM]

Yes you are right cap screws would also fit but the original size screws are IMO still too small.

The cap screws have a couple of advantages, the obvious one being that you can use a larger Allen wrench. The other is you could probably find a high quality cap screw of a harder material than stock. Third reason is if you somehow kill the hex (as you did), then you still have a head to grab with a suitable “all purpose grabbing and turning tool” (AKA pliers). If the threaded diameter still bugs you then you could always drill/tap them all out and still use a cap screw. I’m still using my stock ones after coming up on 3 years, but if they ever get stuck, loose, or otherwise croak, I’ll switch to the ones @RichCournoyer mentioned in the above linked post.

Yes you are right cap screws have certain advantages, what I saw as issues were getting the length right but @RichCournoyer says that 10mm seems to work fine yet, this would require me to go to the store many miles away to get them. Secondly I was also worried a bit that the cap screws sticking out can could grab something, maybe a debris that flies there and get really jammed up. I would certainly recommend to use a 4mm diameter to get a good surface of contact on the shaft.

Well it’s been about 2 years and no problem, but always remember: 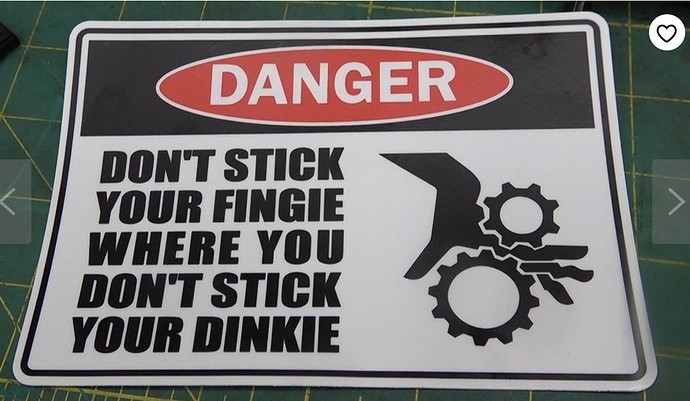 made me laugh, is this yours (the photo I mean, not the saying… ) and would you mind my reusing it ?

I buy my goofy signs here:

Welcome back to the shop! by AvEwerkz

You searched for: AvEwerkz! Discover the unique items that AvEwerkz creates. At Etsy, we pride ourselves on our global community of sellers. Each Etsy seller helps contribute to a global marketplace of creative goods. By supporting AvEwerkz, you’re...

Yep that’s something AvE would say! If anyone here doesn’t know AvE, he’s a fellow Cannuk, with a YouTube channel, lots of good info but a bit of a crude delivery at times.