It seems that the Autodesk plan to make Fusion unusable without a license is going splendidly well, at least for me. Can anyone spot something I’m doing wrong here?

Since the “update” I now get this when I try to start a job in Carbide Motion generated in Fusion 360 using a drilling toolpath; 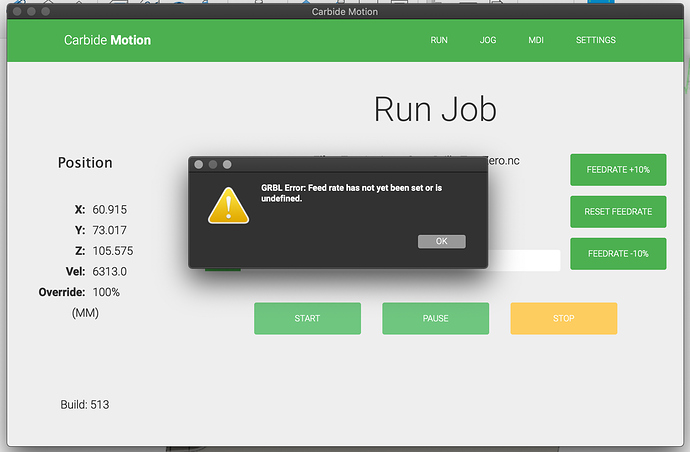 Here’s the intro to the GCode, with the helpful “we broke it” note from the Fusion team;

Whereas a toolpath generated before the “upgrade” looks like this; 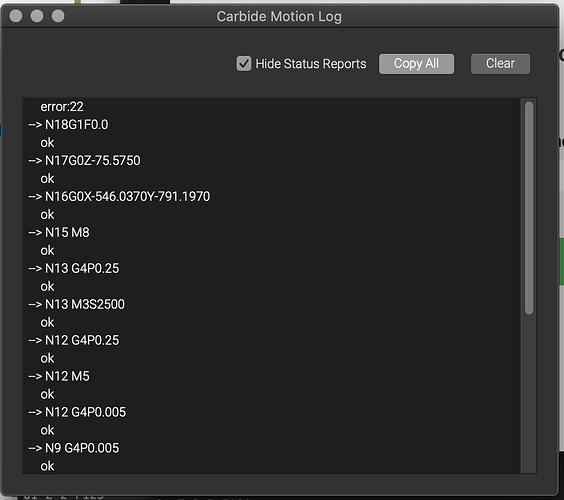 So, it seems that Autodesk has decided to sabotage users by setting the feedrate to Zero to ensure that the job takes infinite time.

Editing the bold lines to remove the F0 removes the Autodesk F-You and the job seems to run.

Thoughts from folks who know more about GCode?

Here’s an easier to read diff; 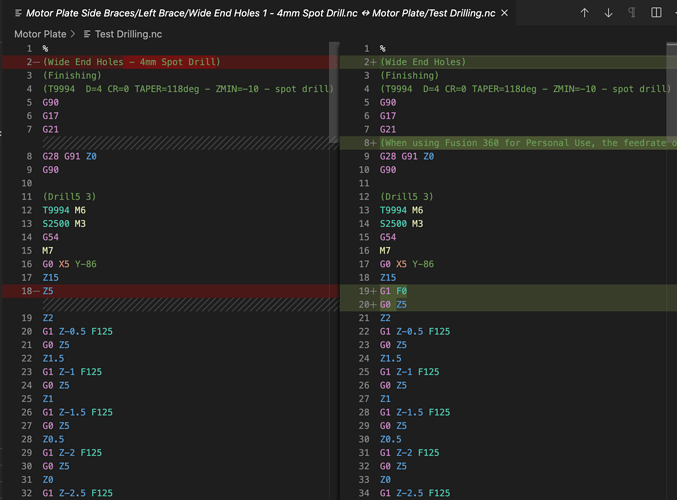 ???
That doesn’t seem right.
That G1 F0 only applies to that line. It doesn’t make sense to have a zero feedrate, hence the error, but I still see rapids.

Would it be useful if I posted the full files?

Yes. Rocking a baby now, but I’ll check later tonight if no one beats me to it.

Do you have GCode for that task?

Should I go post on the Autodesk forums and suggest that some GRBL regression testing might be in order for these changes?

Interestingly there’s another error generating F0 at the end of the file too (having manually cleared the fault at the start);

Other toolpaths seem to work, a contour path just ran fine, if fine includes time to grow a beard whilst it crawled between profiles.

Looks to me like these toolpaths have the rapids as you would want. The retracts on the drill steps and the XY reposition for the operations are rapid. That F0 is weird…what PP are you using?

Do you have GCode for that task?

The key is the G18 arcs, lower acceleration, low feed, and constant engagement.

Same PP as before the Carbide 3D option; 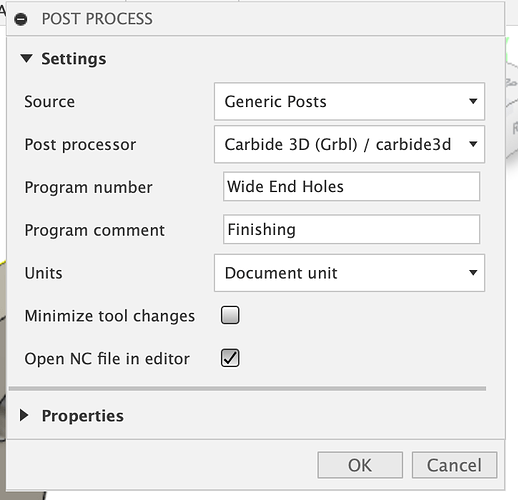 Which suggests to me that Autodesk broke the drilling output in some way that the PP for GRBL didn’t like?

Can you, or anyone, set up a simple file with simple profile cut and an adaptive pocket? Share the Fusion File and resulting CAM operations here. I’m curious…

I was trying to test that for you, but realized the new Fusion release must not have been rolled out to France yet because my rapids are still there.
Version says 2.0.9009, can anyone confirm what version they have, the one that took the rapids away on Oct 1st ?

Setting one up at the moment

@LiamN To be honest, I think that this is more of “honest mistake plus inadequate QC” than “intentional sabatoge”. Some combination of @fenrus and I are working on it. Do me a favor and reply with an *.f3d file as well as a *.nc with the current post-processed code. We can ask someone else to produce the *.nc with the desired post-processed code later (I have plenty to work off of right now so this isn’t limiting a first draft)

I tried that and rapids plus toolchange looked fine in camotics

my play time is often limited to weekends; I hope to have a tool operational some time tomorrow…

I hope to have a tool operational some time tomorrow…

Why’s it always take you so long to complete these complex programming tasks?

Yep, I’m sure it’s not deliberate, normal developers don’t deliberately break code. On the other hand, if you’re removing or restricting functionality in an update which has already caused a fair amount of negative PR, doing your regression testing properly is expected. It doesn’t seem to be affecting any other toolpath either so I’d assume that there’s a poor interaction between GRBL and the additional “no rapids” new code added by Autodesk which there is inadequate test coverage for.

Thanks Neil for the hints on what’s going on in that code.

There’s no rush from my perspective, other than to document the issue here so that other users aren’t confused if they run into it before Autodesk fixes it, which I’m sure they will, once they’re aware. I’m editing the g-code as necessary to run jobs, it was beyond time for me to learn to read and edit g-code anyway, I’ve put it off for too long.

I’m also not suggesting that we should confuse this bug with the possible rapids post-processor as this is a bug in Fusion or the Carbide post processor in Fusion, not something we should try to bodge over in the output code. Fix bugs in the layer they occur. It’s easy enough to just search for the “F0” instances in the g-code and just put a non-zero number in until it’s fixed, for the small number of people who even use the drilling toolpaths anyway.

I also posted a few workaround approaches for people to use whilst there’s no rapids fixer or for those who don’t want to post-edit their g-code with the attendant complexity.

The “test drilling.nc” file posted above is a current output file with the F0 statements which trigger the GRBL error.

Here’s a simple file as requested by Neil, is it sensible?

Four ops;
A drilling op (with the F0 problem): 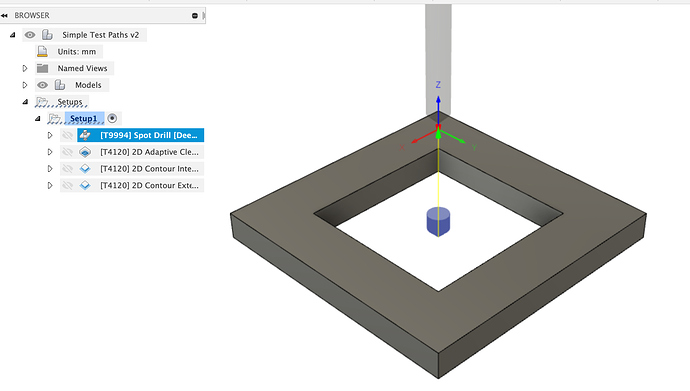 An adaptive clear of the internal pocket; 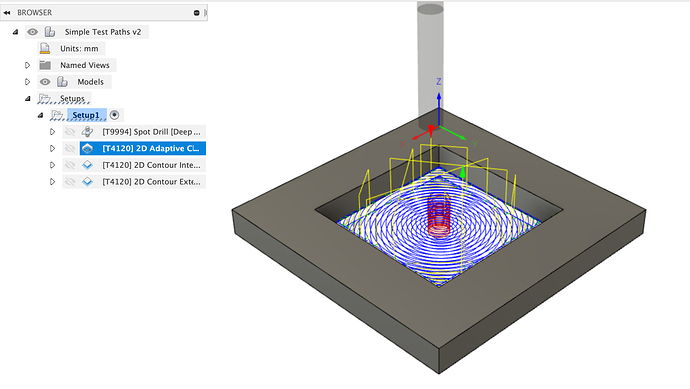 A simple contour of the internal pocket; 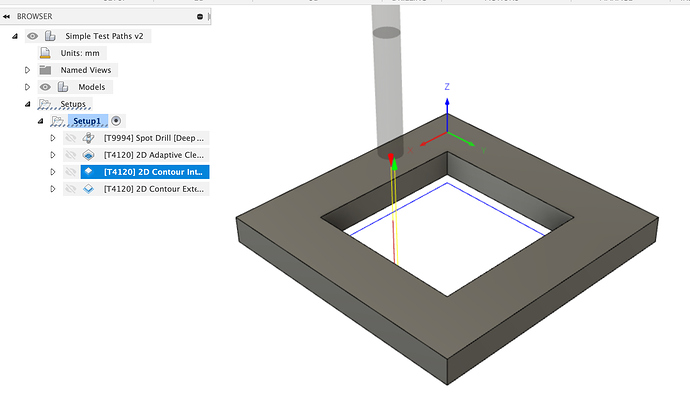 A slightly more complex contour of the external sides; 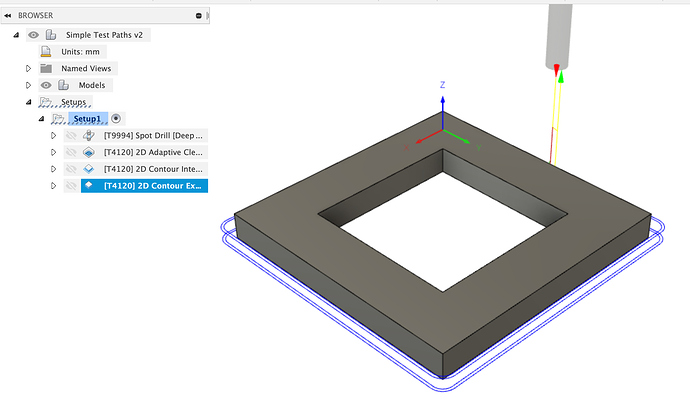 And here’s a zip with the f3d and the four nc files as generated;
Simple Test Paths.zip (140.3 KB)

As built using this Fusion;

So, do y’all think it’s time for me to go post the issue report on the Autodesk forums or are there things I’m missing still?

Probably be good to watch (and report) https://forums.autodesk.com/t5/fusion-360-support/bug-drill-operation/td-p/9779575

Subscribed to that and posted that the Carbide processor suffers the same fate.

There’s a ticket with the dev team now.